Seniors who work at Food Lion No. 10 get to walk 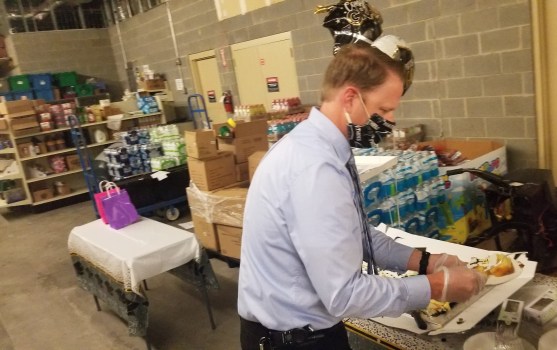 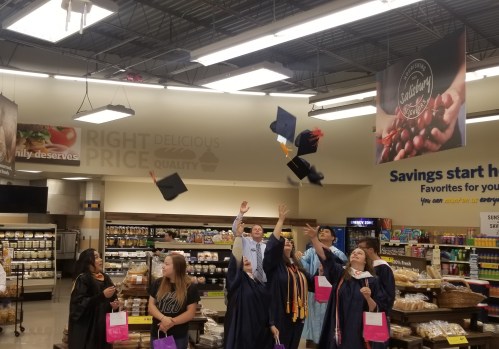 Senior employees at Food Lion No. 10 graduate in miniature in front of the bakery section of the baked goods.

SALISBURY — The Food Lion on Jake Alexander Boulevard took some time and some cake Thursday to show some appreciation for the graduating high school seniors who work at the store.

The seniors had their names called over the store’s intercom and walked the front aisle in caps and gowns like they would if they were having a regular commencement ceremony this spring. Co-workers and family lined up to watch and take photos while the new graduates walked past.

They were each given gifts and a chance to socialize over some cake.

Food Lion Director of Operations Joey Williams said all the stores are doing something to celebrate this year’s class, though each is different.

“It’s obviously unprecedented times with what we’re dealing with,” Williams said. “We’re trying to make it special for the graduates in every single store.”

Williams has been attending similar events at stores as he is able and receives photos and videos from ones he could not attend.

“We knew this was a rough year for the seniors,” said Store Manager Shane Valley. “We knew there might not be a graduation. I know right now they’ve had it delayed.”

Valley, who said he got the idea from a store in Albemarle that held a similar ceremony, thought it would be a great idea to show appreciation for the students — many of whom began working at the store when they were 16.

Valley said the store has 118 employees. Those who go off to college often come back and work during holidays and the summer.

Soon-to-be Carson High School graduate MacKenzie Harvell said she was not very attached to her senior year, did not plan to go to prom and thought she would have been fine with no spring commencement ceremony.

“As the day got closer, I started to get really kind of distraught about what was going on,” Harvell said. “And then all of a sudden we hear that this is going on, and it was really, really sweet. It just made my day they did this.”

Harvell will attend Rowan-Cabarrus Community College and hopes to become a dental hygienist. She plans to keep working for Food Lion while she is in school.

Daniel Ruiz, who is graduating from West Rowan High School, will also be sticking around. He is attending Catawba College to study biology.

“It’s something,” Ruiz said. “I mean what else can we do, really? It would have been great to have actually gotten a graduation ceremony, but this is great, nonetheless.”

Olivia Kesler will be leaving Salisbury to study music at the University of North Carolina at Chapel Hill.

Kesler described the previous two months as a shock and said she appreciated what the store has done to try and fill in what this year’s class is missing out on.

Rowan-Salisbury Schools plans to hold an in-person commencement ceremony in the future.

Harvell, Ruiz, Kesler, Courtney Hunsucker, Sierra Lyons, Sindy Menendez, Andrew Thomas and Leon Woods all walked at the store on Thursday. Sierra Braun, Heaven Joaquim and Whitney Mitchell are also seniors that the store, but could not attend.