Bike boom of 2020: Local shops see soaring demand for bicycles due to pandemic 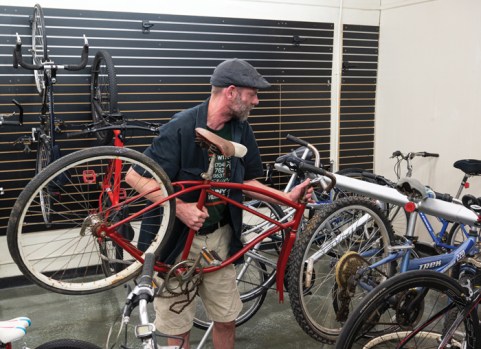 Josh Bergeron / Salisbury Post - Scott Phillips puts a bike in disrepair on a rack in Skinny Wheels, a bicycle sales and repair shop in downtown Salisbury. Phillips who works at the business says says have been much sharper than usual lately and that people are coming in for repairs at a higher than usual rate, too. 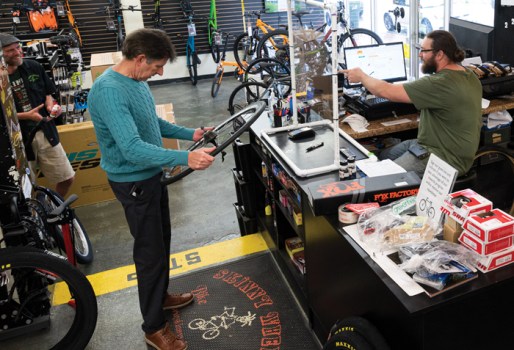 Josh Bergeron / Salisbury Post - Skinny Wheels employees help Rick McCollister, an avid cycler, look for a product at the shop, which has seen an increase in bike sales and repairs during the COVID-19 outbreak. 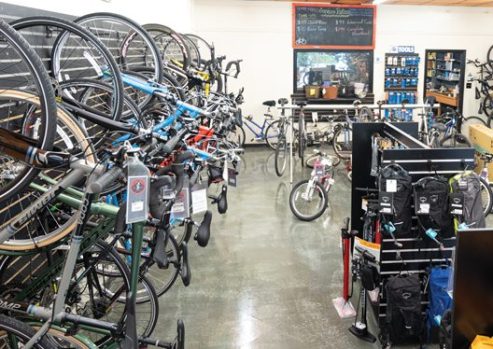 SALISBURY — As COVID-19 has closed businesses, left many working from home and restricted pastimes, people nationwide are wiping off the dust from their 15-year-old bicycles or buying new ones to join in on what some are calling the “bike boom” of 2020.

Skinny Wheels Bike Shop, located at 111 W. Innes St., has more than doubled its normal sales in April, and has already doubled its typical May sales, said owner Eric Phillips. Just in May alone, the shop has made as many sales as it did all of March, April and May of 2019.

The store kicked off the second week of March with bike sales and repairs, and has been busy ever since.

Phillips’ sales have gone beyond Rowan County, too, as he’s shipped bikes to California,  Michigan, Florida and Washington, D.C. He continues to receive calls from interested customers hours away from Salisbury.

And now, only a few entry-level bikes, which typically cost less than $1,000 or so, are left at the Skinny Wheels shop. Phillips added that the shop is backed up on repairs by a week or more. And entry-level bikes continue to be difficult to obtain. The shortage is expected to continue until at least August or September, he said, as suppliers are running low on parts, including bicycle saddles, tire pumps and certain tires.

“It’ll be an interesting year for us going forward,” he said.

This mirrors a nationwide trend of a soar in sales within the bicycle industry, which has also resulted in a shortage in the bicycle supply chain. Adult recreational bike sales across the U.S. in March increased by 121% compared to the same month a year ago, according to a report from Bicycling Retailer and Industry News, which derived industry data from the NPD group.

Phillips said he’s noticed himself forming new habits over the past three months, and anticipates others are doing the same. He added that one customer brought in a bike that hadn’t been used in 15 years and needed some repairs. Others have purchased bikes to pursue a new hobby during the pandemic.

Additionally, one customer, he said, purchased an entry-level bike before returning within a month’s time to purchase a “nicer” bike.

But as the shortage is expected to continue into the late summer and early fall, Phillips said he also anticipates some people will return their newly purchased bikes and sell them back to bike stores.

The Pedal Factory, located at 311 E. Council St., is a nonprofit shop that takes in donated and used bikes and makes necessary repairs. Like Skinny Wheels, Pedal Factory has also seen an increase in the demand for bikes even as the shop has limited some of its services, such as the earn-a-bike program.

Mary Rosser, the director of Pedal Factory, said she and four others have been in the shop six days each week since the start of the stay-at-home order to repair and rebuild donated bikes. The shop has yet to run out of inventory. However, Rosser has limited the number of people who can volunteer their time to earn a bike. For now, the Pedal Factory has been operating on an appointment basis and may consider in the near future implementing more limited workshops used to teach bike owners how to repair and maintain their bikes.

But in an effort to meet some’s immediate need for a bike, the volunteer requirement has been waived for a few locals because “now is not the time to have people in the shop,” Rosser said.

“We are blowing through some bikes for sure,” she said. “It’s been amazing that people have come in and embraced our used bikes.”

She added that the mission of the Pedal Factory is to see more people enjoying bikes for the numerous benefits. And she hopes it’s a hobby many people will continue even after the pandemic.

“I hope we run out of bikes,” Rosser said.

Rosser also encourages biker safety with the use of helmets and knowledge of the rules of the road. She added that the Pedal Factory doesn’t charge anything to have a bike inspected for safety.