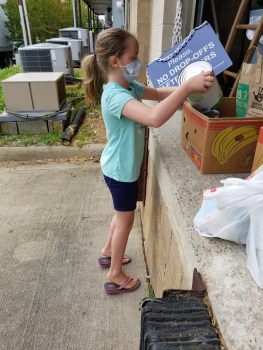 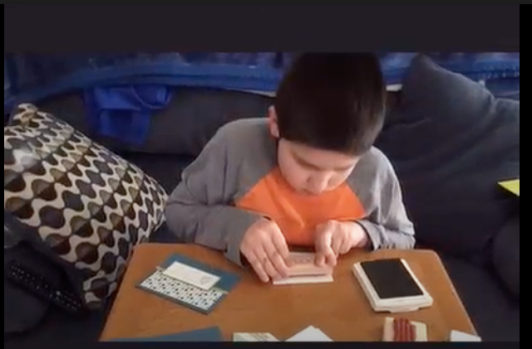 AIG student Charles Coleman signing cards to give out to firefighters, police and hospital workers.

SALISBURY – When recently faced with a service project, Carlos Phillips looked to a place where he could make a big impact.

Phillips, a student in the academically or intellectually gifted program at Isenberg Elementary School, delivered 111 cards to the Citadel nursing home. He chose the Citadel, the site of the largest COVID-19 outbreak in the county, to try and raise the spirits of the staff and residents, who do not see many visitors these days due to the outbreak.

Phillips’ mom brought home cards for a few days, and filled out about 25 a day until all 111 were finished. He had to pass them off to a nurse at the facility because it is not accepting most visitors.

“I felt good,” Phillips said about delivering the cards to the nursing home.

Phillips’ cards were only one of an entire class worth of service projects completed at Isenberg during the COVID-19 pandemic.

AIG students at Isenberg completing service projects is nothing unusual, but this year took on a different tone due to the pandemic. Some of the other projects the students took on involved collecting donations to donate to Rowan Helping Industries, interviewing small business owners to see how the community could help them and more cards.

Charles Coleman gave cards out to people at fire stations, police stations and medical facilities to show appreciation for some of the essential workers who are still on the frontline during the pandemic.

Noah Crousc is out of state with his grandparents and collected donations for their church’s food pantry.

“My grandma’s church already does a food drive every year,” Crousc said. “I thought I could collaborate.”

Noelia Hernandez Ventura took a different approach from the rest when she decided to do something directed at kids her age. She created video lessons to help students who may not be getting any formal education right now.

“I know that many kids right now don’t have a way to, like, learn from their teachers because of all this,” she said.

Her first lesson was about fractions.

AIG math and science teacher Tiffany McDonald said the program wanted to end the year in a meaningful way for students.

“Honestly, they have gotten a bit bogged down by the daily routine of math and reading work. So, we wanted to do something different,” McDonald said.

McDonald said students were given two weeks and asked to do something specific that could impact the community during the pandemic. She added the parents became major parts of making the project happen, which the team was happy to see.

Joy Childers, who teaches AIG math and social studies, said the teachers wanted to pair the project with something they were passionate about. McDonald pointed out that Hernandez Ventura enjoys teaching and looked for something she could do that would line up with her interests.