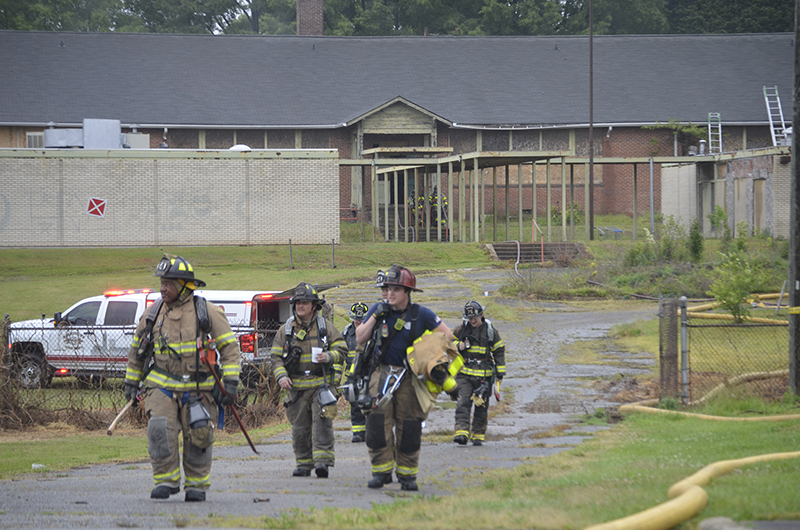 Multiple firefighters responded to the former Lincoln School on Tuesday where a fire was intentionally set inside the vacant property, which owned by Mount Calvary Holy Church. The property is located on South Shaver Street and backs up to the National Cemetery and the Dixonville area.

Someone spotted smoke coming from the building, located at the corner of South Shaver and Cherry streets, sometime before 3 p.m. The building backs up to Salisbury National Cemetery and is in the Dixonville area. When crews arrived, there was a fire in the front portion of the school in a 3-by-5-foot area, Smith said.

Smith said the fire marshal’s office along with the Salisbury Police Department’s arson taskforce are both investigating the fire.

Mount Calvary Holy Church has owned the property for about 17 years, said Jerry Crockett, a head deacon at the church. He said the property is up for sale but has been vacant for quite some time.

Crockett, who arrived to the scene, said he’d been on the property yesterday to mow the lawn and noticed plywood that was over the door had been removed. He said the church boarded up the doors and the windows of the property.

The school began as the Colored Graded School, later known as Lincoln School.

The school, which was established in the 1880s, was Salisbury’s first public school for African-American children and the only one until 1923. The more recent structure, still called Lincoln School, was built in the 1920s.

He said the church was going to renovate the building prior to building its church at its Standish Street location.

The Salisbury Police Department also provided traffic control at Old Concord Road leading into South Shaver Street so that fire personnel could gain access to the road and residents who lived in nearby apartments could get to their homes.