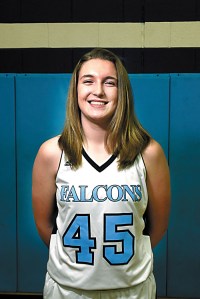 RALEIGH — West Rowan senior Abigail Wilson was voted to the All-State girls basketball team after leading Rowan County in scoring and averaging 11.5 rebounds per game. As a senior, the 5-foot-11 Wilson set school records for points per game (26.2), points in a season (681) and points in a career (2,191). The Christmas tournament MVP after leading the Falcons to emotional victories over Salisbury and Carson, she signed with UNC Asheville.

North Mecklenburg’s Tristan Maxwell and Newton-Conover’s Chyna Cornwell are The Associated Press boys and girls prep basketball players of the year in North Carolina for the 2019-20 season.

George Stackhouse of Fayetteville Westover and Dee Hardy of Fayetteville Smith were selected boys and girls coaches of the year in results released Friday. That followed a vote of 15 statewide media members who also selected the AP all-state players.

The All-State awards came two months after the coronavirus pandemic led to the postponement, and eventually last month’s cancellation, of eight state championship games. The AP suspended its nomination process until there was clarity on the status of those games, then resumed after the NCHSAA  declared finalists as co-champions.

Cornwell, a 6-3 senior, averaged 26.2 points and 16.7 rebounds for the 2A co-champion. The Rutgers recruit had seven votes to finish one ahead of Wilmington Ashley junior Saniya Rivers, who shared last year’s AP award and won the Gatorade award for the second straight time.

Stackhouse led Westover to a 30-0 season and a share of the 3A boys title. His five votes were one ahead of Morganton Freedom’s Clint Zimmerman, whose 29-1 team was the other 3A co-champion.

Hardy earned eight votes after Smith went 31-1 and claimed the 3A girls co-championship. Southeast Guilford’s Rachel Clark, last year’s AP coach of the year, was second with two votes after her 30-1 team claimed the other half of that 3A crown.

Rivers was the only unanimous pick for either all-state team. The men’s team included two players – Raleigh Word of God’s Isaiah Todd and Hudson Moravian Prep’s Josh Hall – who are bypassing college basketball for professional options.

PLAYERS OF THE YEAR