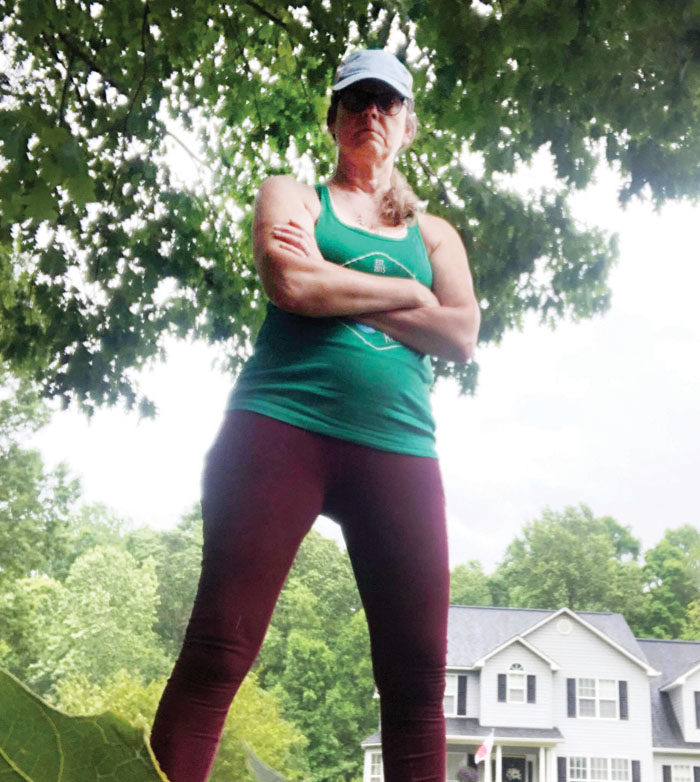 Sharon Earnhardt is a member of the Sarum Run club and about 10 members of the group committed to running in support of Ahmaud Arbery.

SALISBURY — Sharon Earnhardt has few concerns when she runs — but the least of those being that she’ll be chased down or attacked. That’s the reason she and her running club chose to run in support of slain a Georgia man, Ahmaud Arbery.

Arbery, 25, was killed in February after being followed and suspected of committing a burglary by father and son, Greg and Travis McMichael. Arbery was on a run at the time he was killed. The McMichaels were charged more than two months after the fatal shooting. Since that time, people have joined a nationwide movement to shed light on the killing and as a sign of support.

The movement “I Run With Ahmaud” has gone viral and spawned the hashtag #IRunWithAhmaud. Supporters are running 2.23 miles for Feb. 23 — the day Arbery was killed — or 2.26 miles to represent 26, the age Arbery would’ve been had he lived. Regardless of the distance, organizers are encouraging people to run, walk, jog or even bike to show support.

“I know myself as a woman, I think about where I run, but being white I don’t think about being quite so visible that the cops are going to chase me down or some vigilante,” Earnhardt said.

One of the founders of the Sarum Run Club decided to run and challenged others in the group to also support by running in their neighborhoods.

Earnhardt first heard the Arbery story on the news and wanted to support the efforts to bring awareness to his death and the subsequent arrest.

“Somebody doing something so innocent as running, which we do all the time … getting chased down. It seems so brutal,” she said.

She hopes the nationwide movement will raise enough awareness that “justice will be served, not just in this case.”

Earnhardt said she feels as though “people shouldn’t get a pass” for crimes similar to this one.

Enochville resident Shane Culbertson ran three miles solo in support of Arbery after following the story on the news.

“He was just jogging and minding his business when he was wrongfully killed,” Culbertson said.

He added that he felt what happened to Arbery was an act of racism and said, “I will run 1 million miles if needed to help support and put an end to racism.”

Salisbury-Rowan NAACP President Gemale Black said what happened in Georgia could have been in Rowan County.
“I think it’s good to stand in solidarity with our Georgia allies and Georgia NAACP by showing our support whether it’s walking, running or through social media,” Black said.
He said the NAACP has called for the resignation of the Georgia district attorney, who initially deemed the father’s and son’s actions legal, as well as the resignation of the police chief. The organization also requested a special prosecutor preside over the case.
Black said some of those things were done, but there’s more, starting with a conviction for the McMichaels.
Black and Marcus Fairley, the religious affairs chair for the local NAACP branch, traveled to Georgia on Friday to support the efforts there.
Black said it’s important to come together as a community during times like this, and it’s just as important to join forces during election season and stand together at city and county meetings.
Salisbury Mayor Pro Tem Al Heggins is one who has shared the hashtag on Mother’s Day, Arbery’s birthday, and as a tribute to mothers who’ve lost children to senseless violence, she said.

“I just felt compelled to say I support those mothers,” Heggins said.

Heggins said she’s been seeing the story unfold on the news and feels as though it’s one in a long list of similar tragedies that have occurred throughout the United States.

“Hopefully, we can recognize these injustices and not see these kinds of things tragedies to take place,” she said.