Sometimes it’s just old-fashioned warmth, coaches giving a mom that cozy feeling that they’re going to look after her son, that they care about him getting a degree. 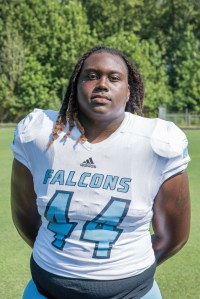 Georgia Tech showed the most love of all the pursuers, and West Rowan’s massive, 6-foot-6, 330-pound Zeek Biggers, who will be a senior in 2021, committed to the Yellow Jackets on Mother’s Day,  a priceless, unique gift for his mom.

Biggers made a Facetime call to the coaching staff to let them know his decision.

“I got that home feeling when I visited Georgia Tech,” Biggers said. “The coaches were cool. They treated me with respect and treated me like I was family. They treated my mom the same way.  I  felt really comfortable at Georgia Tech. My mom shared that feeling and she supports my decision. My whole family does.”

Biggers made the trip to Atlanta to visit Georgia Tech just before recruiting visits were shut down by COVID-19 concerns in mid-March. That probably helped the Jackets land him since he had to take a virtual tour of most of the other schools.

East Carolina and N.C. State were the runners-up.

Georgia Tech is on a mission to get bigger and stronger with this recruiting class. Biggers certainly fits that profile. He’s one of seven early commits to the program. The Yellow Jackets envision Biggers as a nose guard, as a pocket-collapser and run-stuffer.

Also basketball player for West Rowan’s Falcons, Biggers is surprisingly nimble for his size and can make plays laterally. His bulk has made him just about impossible to move off the line of scrimmage in the high school ranks.

While Biggers’ commitment is only verbal at this point — he can’t sign until he’s a senior — he doesn’t anticipate changing his mind.

Biggers admitted it’s a relief to have his college decision behind him.

“Now all my focus can be on having a great senior year, a fun senior year,” Biggers said.