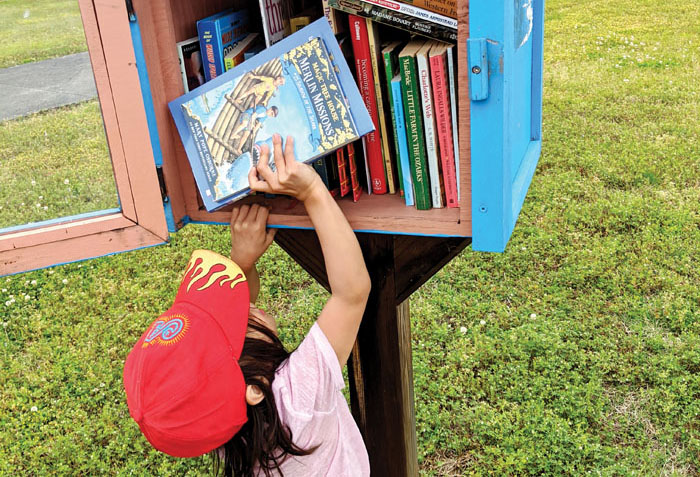 SALISBURY — The Little Free Libraries at a number of county schools have been stocked with brand new books straight off the shelf from South Main Book Company after the store’s owner felt the need to give back during uncertain times.

Owner Alissa Redmond said she read the Post’s coverage of Rowan-Salisbury School’s meal-delivery program that began after schools closed due to the pandemic and it inspired her to do something to help. She had already spoken to the district’s Lead Literacy Coach Brittany Saunders about distributing books through the buses this summer.

“I reached out to her to see if there is anything that can be done now, and finally settled on the Little Free Libraries because there were so many difficulties with transportation through the buses to distribute free books to kids right now,” Redmond said.

Saunders said she had her first conversation with Redmond in February when there was no sign the pandemic would impact the county.

“Really there’s not a way for us to track who is going and who’s not, and we know people are not out on the road as much, so we want to encourage people to go by their closest one and grab a couple books,” Saunders said.

Saunders said this was purely an act of kindness on Redmond’s part and a case of someone who wanted to give back to kids and give them something to be excited about now that schools are closed.

Redmond is not sure of exactly how many books she stocked in the boxes, but it is upward of 500. The books were a mix of easy readers, adult reads, books from well-known children’s authors like Judy Blume and popular series like Nancy Drew. She tried to stock every box with material appropriate for everyone from preschool kids to adults. The only box she has not visited yet is at Mt. Ulla Elementary School. She plans to keep checking the boxes and restock them.

Redmond said her store is still full of books, and she has been able to stay open throughout the pandemic. She feels lucky to be able to keep the doors open and that she has a customer base that continues to support her.

Redmond said it does not take a lot to give back right now and there are many people who are far worse off than she is because of the pandemic.

“It never made sense to close because I was making a profit,” Redmond said. “I wasn’t making what I would have made otherwise, but it was enough to pay the bills.”

Saunders said the district installed Little Free Library boxes a few years ago, and there are 17 locations. She said the number of books cycling depends on the school. At some schools, parent associations adopt the boxes to make sure they stay full.

Redmond purchased the book store in December and said she hopes to partner with RSS more in the future.

Ask us: Why are gas prices higher in Rowan…