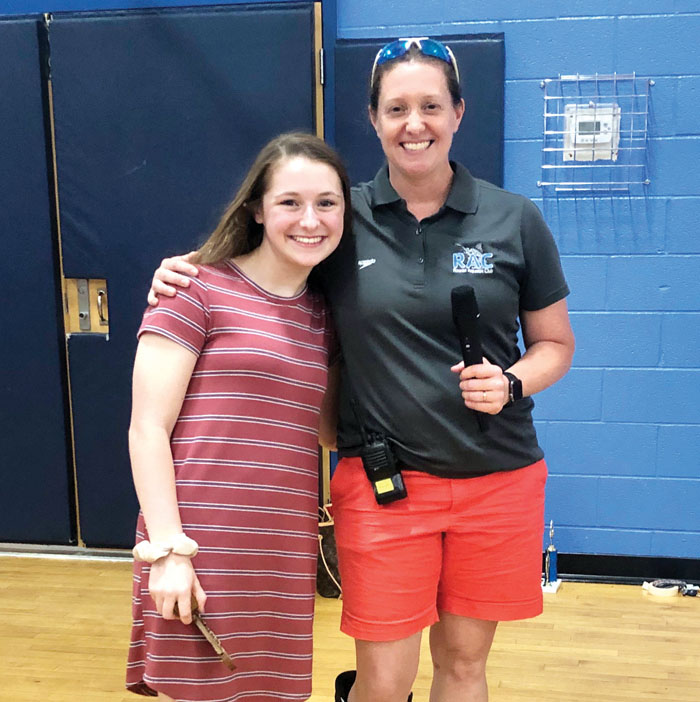 Rowan Aquatic Club YMCA swimmers may be out of the pool due to coronavirus, but the team is still busy getting better.

As of early this year, only 138 teams in the United States had completed the program, which demonstrates a special commitment to creating a safe, healthy and positive environment. This includes development of policies on Minor Athlete Abuse Prevention, Anti-Bullying, Safe Sport Best Practices and Athlete Protection Training. Safe Sport teams nominate a Safe Sport coordinator, expand protections to safeguard athletes and check screening and selection procedures for staff and volunteers. Coaches, minor athletes and parents also complete Safe Sport courses.

As a YMCA program, safety checks and balances are already well established.

“But there still had to be a systematic review, then putting it out there on the Rowan Aquatic Club YMCA website” said RAC head coach Hannah Hawkins. “Your work is reviewed by the North Carolina Swimming Safe Sport Chair, before final checks by the USA Swimming Safe Sport committee. It’s an exhaustive process. But I’m first and foremost a mom. I know it’s easy to be absorbed with everything on your list and just make an assumption that your kids are always safe in organized activities. Completing this process provides reassurance to families of our commitment to proving a safe and welcoming environment for all children.”

Rowan Aquatic Club was back at the YMCA National Championship level, having nurtured a new generation of high-school age YMCA swim kids pushing each other to be their best in practice at the J.F. Hurley Family YMCA each day.

Rachel Gibson already had made the cut and several Marlin teammates were closing in as well.

The 2019-2020 swim season saw more athletes qualify for the mid-season YMCA Capital Classic meet in Raleigh, as well as hit the mark for the YMCA Regional meet in Duncan, S.C. The team was confidant; life at the pool was going swimmingly. Then while coaches and swimmers were packed or already on the road to South Carolina, the news came that the rest of the season was canceled.

Gibson, a rising senior who competes at North Stanly High, had been cutting time all season with her usual dedication and determination to hit the wall first. YMCA Nationals was a goal for her almost since she began swimming with RAC in 2011 at the age of 7. According to Gibson’s mother, Jennifer, Hawkins became the driving force behind Gibson’s love for swimming and competitive spirit. After years of training, she had hit this lifetime goal in February and become a Y National qualifier in the 100 breaststroke. Back-to-back drops in the 200 breaststroke had also brought her to within a quarter of a second of the National standard. Then the virus came and the last meets had to be canceled.

Gibson had overcome a frustrating 2018 season when her times were up and down and goals seemed far away. So being who she is, she honed her technique and improved at dryland training and enlarged her focus to enjoy and improve at the full range of events offered in swimming. Patience and persistence and positivity were required, and RAC coaches knew the signs were all there, it was simply a matter of  “Just Keep Swimming.”

“The swim season starts in September and by the YMCA home meet in November 2019, the dam broke and best times were flowing,” Hawkins said.

A team tradition is the importance placed on school and the coaches’ favorite honors to give out at the end-of-year banquet are the ones for academic success or A/B honor roll. It wasn’t just that swimming was going well, along with several RAC senior swimmers, Gibson is also a member of the National Honor Society and takes online college classes and carries a 4.3 GPA. Proving the old adage that if you want to get something done, you should ask a busy person, she volunteers as one of RAC’s athlete representatives to the North Carolina Swimming athlete committee and is a RAC Safe Sport athlete representative.

As with many athletes whose events have been canceled, YMCA swimmers have had to accept the closure of the pool and keep a positive outlook. Gibson says she is blessed to have her health, family, church family, a wonderful coach and a supportive team.

One of the things she is most thankful for are the friends she has made at RAC and how they support each other. “Raised byRAC” may be the team hashtag but it’s the daily reality.

“Swimming can feel like an individual effort until you get to know your teammates,” Hawkins said. “By the time swimmers are teenagers they know that a rising tide lifts all boats and so they feed off the work and success of each other. And of course regular senior team dinners!”

During the social distance era, teammates who are so used to sharing the same 25-yard rectangle haven’t quit communicating and encouraging each other. The coaches also host online meetings and training so the team can stay connected and continue advancing in the sport that they all miss so much.

Gibson placed third in the 100 breaststroke in 1A/2A State Championships in February.

She wants to qualify for more events for YMCA Nationals and plans to swim in college.