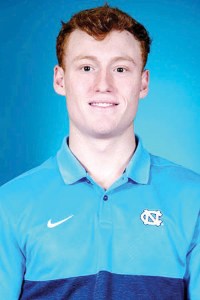 The Intercollegiate Tennis Association released its list of men’s All-Americans for the 2020 season.

Kiger is the grandson of Tom Kiger, of Salisbury. Kiger was a basketball star at Boyden High. A push-shot artist, he scored 406 points in 1955 and averaged more than 20 points per game. He made the Greensboro Daily News and Charlotte Observer All-Western Conference teams and the Observer’s All-State team.

UNC had a singles player and two doubles teams named to the All-America tennis squad. UNC had more players named than any other program. When the season was canceled in March due to the coronavirus pandemic, the Tar Heels were 12-1 and ranked No. 2 in the nation.

UNC won against No. 7 N.C. State in the last match it was able to play. The Tar Heels only were able to play twice in the spring season. They were 10-1 in the fall, with the lone loss coming to Southern California in a tournament in Wisconsin.

Kiger played high school tennis at Laurel Springs School in New York and was ranked ninth nationally in the recruiting class of 2017.