College football: Pitt is it for Wilson 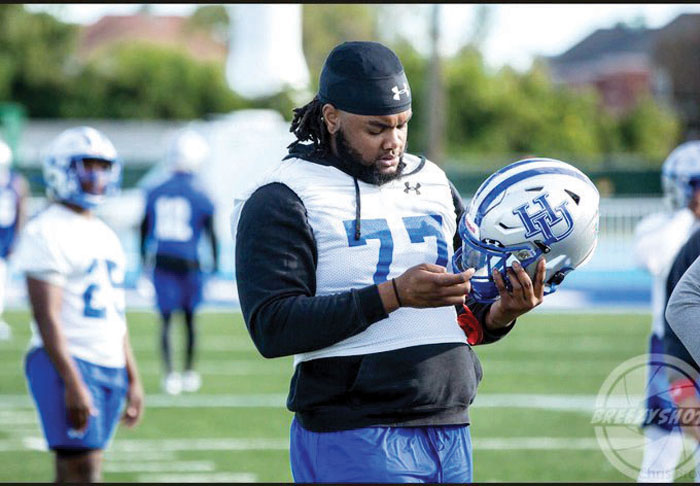 The top level of college football has been a goal for West Rowan graduate Keldrick “K.J.” Wilson for a long time, always out of reach, but now he’s become part of that elite circle. He announced his commitment to Pittsburgh on Saturday and will play for the Panthers as a graduate student.

The 6-foot-5, 299-pound Wilson has graduated from Hampton University with a degree in criminal justice, but he still has a year of football eligibility.

Wilson knew when he tossed his name in the transfer portal that there would be at least moderate interest, but he was pleasantly surprised by a spirited pursuit of his services that became a highly publicized recruiting battle. There were so many offers from so many places that Wilson wound up announcing a final four about a week before his ultimate decision. That foursome was Pitt, West Virginia, Southern Cal and Indiana.

“I thought it might just a few schools that were interested,” Wilson said. “But everyone had a chance to see the film, and then there were a lot of schools getting involved, including Power 5 schools. I was excited about it. No one made me any promises. Schools just said I’d have the opportunity to compete for a starting spot, and that’s what I was looking for. No one has ever given me anything. I’ve always had to earn it.”

It’s safe to say that Pitt didn’t chase Wilson so he could sit on the bench. He’ll get his chance, even though Pitt has six returning offensive linemen who have started games. Right tackle is kind of up in he air for the Panthers, so that’s probably where Wilson will get his shot.

Well, Wilson is not only big, he’s experienced. He’s tough. He’s been through some adversity and he’s always gotten back up after he’s been knocked down. He’s really athletic for his size and has a basketball background. The NFL is trending more and more toward athletic offensive linemen because they’re the only guys who have a chance to block increasingly athletic pass-rushers, so Wilson may even get a shot at the NFL.

That’s his next dream. If he falls short of achieving it, it won’t be from lack of effort. He grinds to make that dream a reality every day.

“The last two summers I didn’t come home except for a few days,” Wilson. “I stayed at Hampton and was in the weight room every day and I ran every day. I lived in that weight room.”

Wilson recalls being a reserve in his early days on the West Rowan jayvee team. But he never got discouraged. He’s always believed that superior work ethic could solve every issue. He was really coming on by his senior season at West in the fall of 2015. He  turned in his best games in the playoffs against the stiffest opposition, teams such as Concord and South Point. Continued growth after high school for Wilson looked like a good bet. College coaches noticed.

Like everyone, he wanted to go to one of the FBS programs. He was on FBS lists.

“I had a big senior season, but recruiting can be frustrating,” Wilson said. “East Carolina offered a guy. They said I was the next guy on their list if he turned them down, but he didn’t turn them down.”

Wilson considered junior college, figuring he might be able to move on to the FBS ranks after two years of JuCo ball, but then he got a call from Markus Lawrence, who was the offensive line coach at Hampton in those days.

“My dad (former Livingstone College player Broderick Wilson) and I had started talking about my military options that very night when Coach Lawrence called,” Wilson said.

Hampton turned out to be Wilson’s choice. It was FCS  — not FBS — but it was a solid school, and Wilson had family in the area that he could turn to.

Hampton wasn’t a breeze. There were some hard knocks and 5 a.m. practices.

But in 2018, after a coaching change, Wilson was almost back where he started with a new staff. But he was a full-time starter in 2019 and had a season that was strong enough that a lot of coaches noticed.

“There were tough times,” Wilson said. “I lost my grandfather. There were some frustrating times when I was grading higher, but still not starting. But I kept going through it all. I got my degree, and that’s the biggest accomplishment of my life so far.”

Wilson had visited two of his possible new homes — Georgia State and Liberty — when all physical visits were shut down by the coronavirus.

So Wilson had to make his final decision based on what he could see from his apartment.

“The schools that were recruiting me gave me virtual tours of their city and their campus,” Wilson said. “It was thorough. Some of them were two hours.”

Pittsburgh ultimately won him over with phone calls — and lots of them. Most originated from offensive line coach Dave Borbely.

After Borbely watched Wilson block on five plays on film, he knew he had to get him in a Pittsburgh uniform. A lot of coaches showed Wilson a lot of love, but Borbely took it to another level.

“He called me every single day, literally every day,” Wilson said. “I’m working at Walmart and sometimes he’d call in the morning before I went to work and I’d tell him only had 15 minutes to talk. He’d tell me he just wanted to say hello, but then we’d wind up talking for 45 minutes. We connected really well, and I’m excited about playing for him and (head coach) Pat Naruzzi. I think Pittsburgh gives me the best chance to realize all my dreams.”

It’s an amazing, inspirational story, the kid who sat on the bench for his first jayvee game, will now be competing in the ACC.

Circled on Wilson’s calendar already is a sort of homecoming — Pitt’s visit to Chapel Hill that is scheduled for Nov. 14.  Duke is scheduled to visit Pitt on Sept. 19.

“I’ve been fortunate to have parents who kept pushing me, and I’ve been able to come a long way in life,” Wilson said. “But I’m not finished yet.”