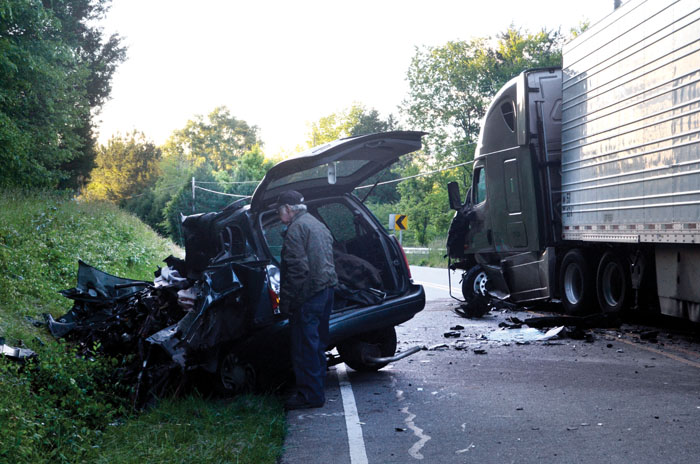 One person died after a vehicle struck a tractor-trailer on Monday afternoon on US 601. Photo by Shavonne Potts, Salisbury Post.

The victim was identified as James J. Perhealth, 29, who died at the scene. The crash occurred near 8655 U.S. 601 shortly before 6 p.m. and involved a KLLM tractor-trailer that struck Perhealth’s vehicle broadside on the driver’s side.

The tractor-trailer, carrying a 53-foot empty enclosed trailer, was driven by Michael Goodman, 38, of Olanta, South Carolina, who was traveling north on U.S. 601.

Perhealth was speeding south on U.S. 601 in a Nissan Quest van, according to the Highway Patrol. He traveled left of center, overcorrected and was struck broadside on the driver’s side of the vehicle. He was not wearing a seatbelt, according to Trooper C.K. Ridenhour. It is unclear if impairment was a factor, according to the trooper.

The roadway was blocked for a couple of hours as troopers with the N.C. State Highway Patrol conducted an investigation. Ellis Cross Country and Franklin fire departments also responded to the collision, which occurred not far from the Davie County line.

Traffic was detoured on the Rowan County side at Potneck Road.