Softball: Greene makes the most of her last season 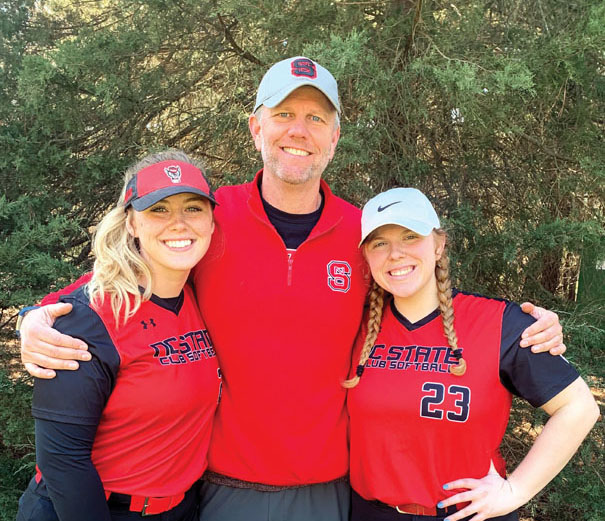 SALISBURY — Peyton Greene graduated — virtually — from N.C. State on Friday, and did so with more athletic memories than she ever expected to haul away from Raleigh.

A two-way standout who slung and slugged softballs for West Rowan, Greene was the 2016 Rowan County Player of the Year as a senior, but she had no intentions of playing competitively past high school.

“I’d decided by my junior year at West that N.C. State was where I wanted to go to college,” Greene said. “So I didn’t go to the summer camps, didn’t send out videos, didn’t try to get myself recruited. When I got accepted at N.C. State, that was my dream. I just wanted to go there and be a normal student and have a normal college social life. I was done with softball, and I was fine with that.”

She was fine with that for her freshman and sophomore years at N.C. State.

But another Greene arrived on the N.C. State campus prior to Peyton’s junior year. That was Peyton’s younger sister, Parker Greene, a catcher and outfielder who was Rowan County Co-Player of the Year fir West in 2017. For the younger Greene, the college choice had been a tougher decision. She had a chance to continue her softball career at UNC Wilmington, but her academic interest was agriculture. She opted for education at N.C. State, but she wasn’t ready to leave softball behind completely.

“Parker comes back from tryouts and says, ‘We need a pitcher. You’re playing. No excuses,” Peyton recalls. “So I’m thinking, ‘OK, why not try it?’ ”

Both Greenes are good left-handed hitters. Both were welcomed with open arms.

The club team doesn’t involve anywhere near the time commitment of a varsity team, but it’s played at a reasonably high level by women who were the best, or among the best, players on their respective high school teams. The Greenes helped make N.C. State a national power in the club ranks.

“Club softball isn’t like intramurals where people are just out there having fun,” Peyton said. “Club is really competitive, very good softball, with a lot of really strong players. But it’s also flexible as far as your time. They understand academics has to come first. Practice was two days a week and we played a three-game series every other weekend. It’s a two-season sport. You play in the fall and in the spring.”

It didn’t take long for a third Greene to get involved. That was Jimmy Greene, who coached both of his daughters at West Rowan. N.C. State Club games were on the weekend, so he could be there for all of them. It was only a matter of time before he was in the dugout and on the field.

“These are adult women who practiced on their own and made their own lineup,” Jimmy said. “But they asked me to do the in-game calls — the bunts, the steals, changing pitchers — and arguing calls. I do love to argue calls. They also needed someone who knew all the crazy rules. They were winning and when you’re winning, you get superstitious about not changing anything. They’d get mad at me if I wasn’t there.”

N.C. State finished 26-4 for the 2018-19 season, played in the Club World Series and finished seventh nationally.

Peyton’s comeback was strong enough that she was named national player of the week for one amazing series. She became the team’s ace pitcher. Peyton and Parker both hit over .400.

“That club team was already legit, so Parker and Peyton just helped them some,” Jimmy said. “It was a blessing to get to coach both my girls again. They had gotten used to me busting them in high school, but this was more laid-back. This was a breeze for all of us, and I think they loved every minute of it.”

The Greenes were on board from the start for the 2019-20 season. Parker batted over .400 in the fall portion of the season, before she broke an ankle. Peyton enjoyed a fantastic senior season, 10-0 in the circle and batting over .400. She’d racked up another national player of the week award. N.C. State was 16-1 and ranked fifth and looking forward to another World Series adventure.

Parker made it back from her ankle injury in early March and was back in the lineup with Peyton for a series with UNC Wilmington.

“We played that last series together, not knowing it was going to be the last one, but then the virus stopped everything,” Peyton said. “But that last day on the field was perfect. We had some friends like Mackie Gallagher and Caroline Forbis make the trip from Rowan County to watch us play. My sister was back on the field, my dad was with us, and I hit a home run to finish my career. That’s about as good as it gets.”

Peyton was named to the All-South Atlantic Region team, sponsored by Rawlings. Thirteen girls from Florida and the Carolinas made the team.

N.C. State’s Elyssa Cartagena, who was a star in her high school days in Virginia, and Savannah Harrison, who pounded softballs for Green Hope High in Cary, also made the all-region team.

“Club softball changed my life and was a great experience,” Peyton said. “I had no idea what it would mean to me, but it gave me an opportunity to play the game I love again, alongside my sister and my dad. My only regret is I didn’t play all four years.”

It’s an exciting time for Peyton, who graduated with a degree in elementary education.

She was a student teacher at the third grade level in Wake County until schools were shut down. At a job fair in early March, she landed her first teaching contract. She’ll be employed as a fifth-grade teacher in Bluffton, S.C. —  that’s near Hilton Head — starting in July.

If she’s done with softball for good this time, that’s OK. She went out on top, as one of the best players on one of the country’s best club teams.

But her father hopes she’s got some coaching in her future.

“I asked all the girls on the N.C. State Club team to find a way to give something back,” Jimmy said. “That’s a team full of great female role models who know the game. I hope all of them will coach at some level — or maybe even umpire. They can benefit a lot of people.”