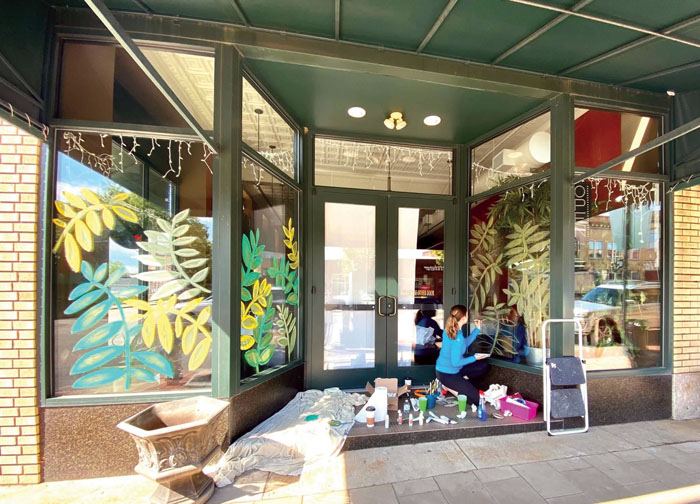 Courtesy of Whitney Wallace Williams — A volunteer paints the windows of Bangkok Downtown, located at 131 E. Innes St., as part of the effort among downtown businesses to paint the town with vibrant springtime colors during the pandemic.

SALISBURY — A little extra time on their hands allowed Taylor Durham and Megan Ferden of Lettered Lily to add some springtime colors to their windows after having to close in late March, which sparked at least a dozen other businesses around Salisbury to do the same.

Durham, co-owner of Lettered Lily at 113 W. Fisher St., said she and Ferden wondered how they’d move forward with their business after closing due to the COVID-19 pandemic, but it also prompted them to complete a goal they had for a while: painting their store windows. Soon after, she and Megan became a “task force” in helping others around the town bring springtime to their businesses as well.

“When you see art, it brings a smile to your face,” Durham said, noting the feeling the community may have viewing the art while driving downtown or going for a walk.

Originally beginning with downtown businesses, the initiative has spread and now includes nearly 20 businesses that have decided to bring all variations of springtime colors to their windows, including Walser Technology Group, located at 108 S. Main St. Durham said she and Ferden helped the business with its “motherboard, tech-style” trees.

Whitney Wallace Williams, who serves as the Chair of Downtown Salisbury, Inc., said the uncertainty among downtown businesses and property owners resulted in an opportunity for DSI to “step up and show our value to stakeholders.”

Williams said she contacted Durham and Ferden, calling them “the most creative women I know,” and told the pair that DSI wanted to develop a creative (but safe) idea to boost morale and promote downtown shops.

After Durham and Ferden painted their own windows, Williams recruited volunteers, including her close friends, in an effort to inspire other business owners to join in on the “therapeutic” fun.

“We wanted to come up with a safe, creative, emotional boost for downtown businesses to bring energy and life into the downtown this spring and summer,” Williams said. “The stores may not be open, but they look loved on and hopeful.”

Williams said the art on various windows was chosen through a collaboration of the store owner and the volunteer, with no limitation to spring flowers only. She added that she supplied eight buckets of paint, brushes and other supplies that volunteers have utilized on a rotating basis.

Additionally, DSI developed a landing page on its website that shares COVID-19 updates, resources and operational changes for local businesses. Williams said the Facebook page has been used to share any and all updates. And a one-on-one mentorship program has been developed to help downtown business owners navigate the loan process, as well a program to help businesses adapt to online sales during this time.

Durham said the paintings allow the community to continue talking about the local businesses even as many shut down due to the pandemic.

She plans to paint her business’ windows for the summer, as well, and wants to see the town do it more often since Salisbury is “such an artistic, creative town.”