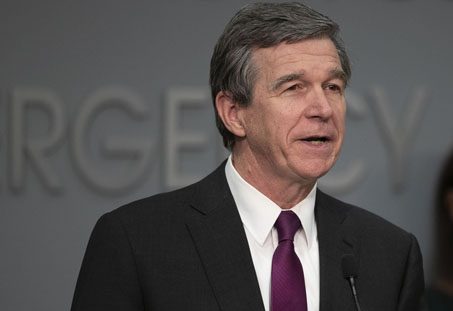 RALEIGH, N.C. (AP) — COVID-19 remains a “lethal threat” to North Carolina residents who don’t take it seriously, Gov. Roy Cooper said on Friday as rules he issued so more businesses can open and the public enjoy more of the outdoors take effect.

Cooper offered sobering comments to citizens even while defending his decision this week to initiate Friday afternoon the first part of his three-phase plan to ease restrictions that began in March. He said it’s still preferable to stay at home, but urged social distancing and wearing of face masks in public.

“Phase one is a careful modest step to reigniting our economy while keeping important safety rules in place,” Cooper said at a media briefing in which he told stories about some North Carolina residents among more than 525 that have died after catching the virus. He mentioned Durham County sheriff’s Officer Alexander Pettiway and longtime Cleveland County restaurant owner Janice Greene among others.

“Each number represents the death of a real person,” Cooper said. “COVID-19 is a lethal threat, it is a cruel virus, causing grave harm in sometimes otherwise healthy people, separating people from their loved ones at the darkest of hours.”

Now most businesses can open as long as they limit customer occupancy, usually to 50% of what the fire code allows. Patrons must remain at least 6 feet apart and customers and workers are encouraged to wear masks. All but one state park will be open starting Saturday, and despite a 10-person limit on mass assemblies, church services can be held outdoors if worshippers remain apart.

Restaurants are still barred from offering dine-in options, while barber shops, gyms and movie theaters will remain closed. Those could be reopened, at least partially, in two weeks should statistics continue to improve. Business groups, some Republican politicians and conservative activists want the state’s reopening accelerated.

Residents in nursing homes now account for about half of the state’s coronavirus-related deaths, with 11 such facilities reporting 10 or more deaths, according to Department of Health and Human Services data updated Friday. The Pruitt Health-Carolina Point home in Orange County has the most reported deaths at 20.
A fifth state prisoner diagnosed with COVID-19 — and the third at Neuse Correctional Institution in Goldsboro — has now died, according to the Department of Public Safety.

A coalition of union leaders and worker activists wrote to Cooper and other state leaders asking them to do more to protect the workers at meat and poultry processing plants. Nearly 1,100 virus cases have been now been confirmed in 22 outbreaks at plants in 14 counties, DHHS said Friday. The department has declined to release the names of the plants, citing in part a health confidentiality law. Officials at Smithfield, Mountaire Farms and Butterball have confirmed positive cases at North Carolina plants.

Line workers are employed in close working conditions and often lack enough personal protective gear, according to speakers at a Friday news conference organized by the coalition. They fear going to work or staying at home and risk losing their jobs, the coalition’s letter said.

Cohen said Friday that the U.S. Centers for Disease Control and Protection have provided her agency additional personnel to ensure plants are following safety guidelines.
___
Follow AP news coverage of the coronavirus pandemic at https://apnews.com/VirusOutbreak and https://apnews.com/UnderstandingtheOutbreak.