Track and field: Wiggins has amazing tale to tell 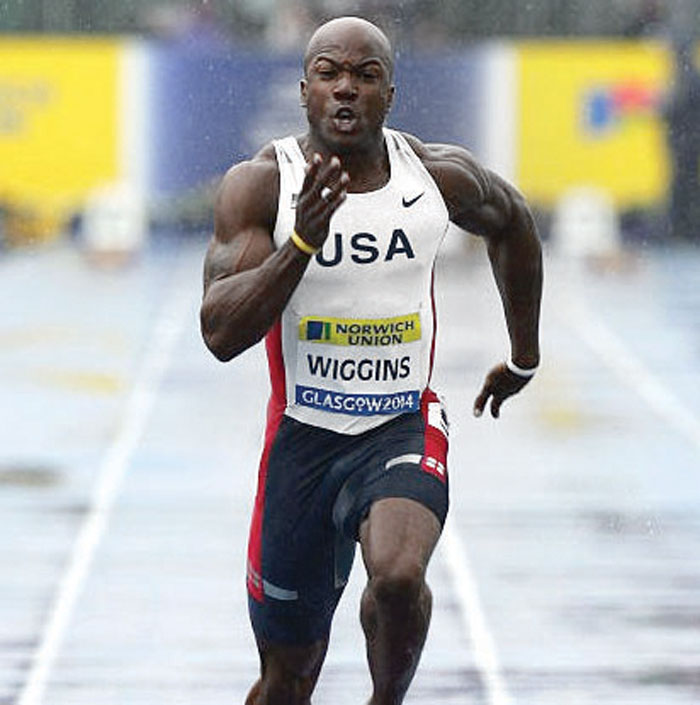 If you’re wondering who Wiggins is or if you’ve forgotten who he is, the 2000 South Rowan graduate and Appalachian State Hall of Famer (Class of 2013), is the fastest sprinter ever to come out of Rowan County. At his peak, he was one of the swiftest men in the world. His heart and wheels carried him all over the globe, to participate in events in which he had “USA” emblazoned across his chest. He competed in 35 different countries.

“Maybe there was something special in that Rowan County soil and water, maybe something in my grandmother’s vegetables that made me so fast,” Wiggins said with a laugh.

Wiggins was born on this planet, but he has an origin story straight out of a comic book.

His father, a Salisbury High graduate and U.S. Army veteran, was killed in an auto crash when he was 4 years old, but his mother and his grandparents — Wiggins is named after his grandfather — raised him with morals and standards and a work ethic that would become legendary.

“My mother was strict, but she was loving and she was mother and father to me,” Wiggins said. “I never allowed growing up without a father to be a reason not to be successful. If you want it, you have to work to go get it. That always holds true, no matter what your family situation is.”

For a long time, he was one of the smallest guys at South Rowan. He was the class clown, the guy who led cheers in the bleachers. But then he grew. It was like he’d been bitten by something radioactive. He went from 5-foot-3 to 5-foot-9 in a matter of months, and he didn’t stop until he was 6-foot-1. Known for years as “Little Ernie,” he suddenly was “Big E.”

“I came back to school from summer vacation and people didn’t recognize me,” Wiggins said.

In the spring of 1999, Wiggins was a junior, lining up next to A.L. Brown legend Nick Maddox, one of the nation’s most celebrated high school athletes, for the 100-meter dash. Maddox nipped Wiggins, but that’s the day Wiggins realized he had a chance to be something special. That’s the day he started believing he could beat anyone, and belief is a powerful thing.

By the fall of 1999, Wiggins’ senior year, South was counting on Wiggins to be a football hero. Wiggins scored two touchdowns against Salisbury and one each against A.L. Brown and West Rowan. He rushed 40 times for 283 yards in South’s first five games, but then a forearm injury ended his season.

It seemed like a terrible blow at the time, but it was a blessing in disguise. The injury allowed Wiggins to focus on getting healthy for his senior track season.

Wiggins grew up in Neely Town, a black community in China Grove. Michael Ramseur, a record-setting track man, as talented a football player as South Rowan has ever had and the 1982 ACC Rookie of the Year at Wake Forest, came from Neely Town. Wiggins trained on the hill and fields of Neely Town, and track, not football, turned out to be his calling.

Coach Davis introduced Wiggins to the squat press and Roman dead lifts. That changed his level of strength and his stride.

Football had proven mostly frustrating for Wiggins, but that frustration provided fuel for track. Wiggins ran hungry and ran angry.

Life takes its twists and turns. Wiggins wound up at Appalachian State, mostly due to a recommendation by Ken Billings, whose son, Brian, was a South Rowan lineman being recruited by the Mountaineers.

Wiggins will never forget the day ASU called his house and told him he was getting scholarship money and a chance.
“I promised them they’d never regret it,” Wiggins said. “Then I went out the door and tied my shoes. I looked at the dirt road and took off running. I must have run five miles before I stopped.”

There was a redshirt year at Boone. There was an adjustment to running at elevation and there were days he slogged through snow to practice, but Wiggins was ready for the challenge. In his first indoor meet, he broke a school record. After that, his mission was to shatter a record every time he ran. Often, he did.

“Running for ASU against USC, UCLA, Florida and Ohio State was like running for South Rowan against the Winston-Salem and Charlotte schools,” Wiggins said. “I loved representing the little guys.”

He was a fierce competitor.

In 2004, he ran that 10.18 to break the East Regional 100 record and staked his claim as the fastest sprinter east of the Mississippi. He was a two-time All-American during his days in Boone, a six-time Southern Conference champion. In 2004, he was honored as Appalachian State’s Male Athlete of the Year.

That wasn’t the end. That was the start.

In the summer of 2004, he competed in the Olympic Trials in Sacramento and was an alternate for Team USA’s 4×100 team. He won gold and silver medals in international competition. Wearing the “USA” always provided a rush of adrenaline for the kid from China Grove.

“Living the dream, I was part of the Big Show,” Wiggins said. “Once you’re part of that group,  once you’re among the best of the best, you’re representing Team USA in a lot of events, and I did that from 2004 through 2008. I competed in front of 70,000 fans in Osaka, Japan. I competed in the Penn Relays in front of a record-setting crowd. I competed in the Millrose Games in Madison Square Garden, competed in the USA vs. The World Meet in the Crystal Palace in London. For a country boy from China Grove, it was all amazing. So many blessings.”

From 2007-09, he held Nike sponsorship. As a pro, he competed against Usain Bolt, Maurice Greene, Tyson Gay, all the big names.

USA track coach Brooks Johnson handed Wiggins the nickname “Atlas,” because all you could see when he ran were muscles and feet.

He trains 450 to 500 athletes a year, ranging from high school soccer teams to professionals. He makes everyone he works with stronger, faster and tougher.

In 2016, in his mid-30s and after a seven-year hiatus from competition, Wiggins launched a startling comeback.

“My clients that I was working with, they were nagging me and wanting to see me run,” Wiggins said.

He ran a 6.60 in the 60 meters, a time that put him among the top 25 in the world. He clocked a 10.15 in the 100 in the Florida Relays and qualified for the Olympic Trials. But then a torn Achilles tendon derailed a storybook comeback.

He branched out into “Elevate Orlando,” a non-profit organization that helps low-income students get to college.

He found out that whenever he speaks, people listen. That led to the “Ernest Movement,” a motivational speaking and goal-orientation platform.

He’s become valued as a motivational speaker and stays on the go. He’s been asked to speak at conferences as far away as Canada. He spoke to rallies for Chris King, when King was running for governor of Florida.

“Speaking in front of thousands of people is exhilarating,” Wiggins said.

Wiggins was called on to share his story not long ago with a much smaller audience — Appalachian State’s track team —  more proof that life moves in circles.

Not many people have a more remarkable story to tell.

“I know from personal experience that it’s possible to go from being undersized to becoming one of the world’s fastest humans,” Wiggins said. ” When I speak, I talk about what I did right in my life, but I also talk about what I did wrong and what I learned from it. The point is, everyone can be successful. All that’s needed is passion, focus and hard work.”