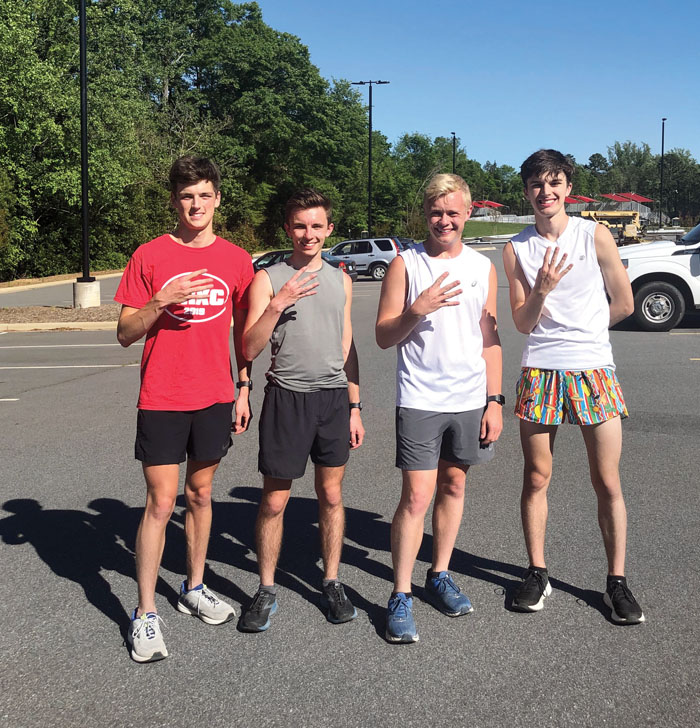 CHINA GROVE — They call it the Yeti Ultra 24-hour Challenge.

There are six five-mile legs, in all, so you cover 30 miles in a 24-hour period. That’s where the 24-hour Challenge gets its name.

You start at the time and place of your choosing, but after that, you’re at the mercy of the clock, your head, your legs and your stomach. There’s no combining segments, no jumping the clock.

Thirty miles is lot of miles to travel in a day (and night) even for fit teens such as Tyler Sheets and Trent Rivers, who will be graduating from South Rowan on May 22, and Noah Julian and Nolan Miller, who are part of South’s class of 2021.

While the four participants are all part of South Rowan’s distance crew, with schools closed, they couldn’t run in the Challenge as South Rowan Raiders.

So their attire, something they changed during each of their down-time intervals, was casual, multi-hued and wildly unmatching.

Still, they took the concept of being teammates to a whole new level. They suffered together.

Julian found out about the Yeti Ultra 24-hour Challenge from his father, Scott, who coaches South’s boys cross country team. Scott found out about it in a text from a friend.

It originated in Georgia with a man named Jason Green and his organization — the Yeti Trail Runners. Green’s motivation was helping out a friend’s print shop in Alabama that employs and helps many with disabilities or special needs. With the normal wave of running events stopped by COVID-19, the print shop wasn’t getting its normal volume of T-shirt orders and was struggling to survive.

But they’ll be printing a lot of Yeti Ultra 24-hour Challenge T-shirts in the days ahead. By the end of April, 3,400 runners, representing every state and 15 countries had successfully completed the Challenge. Thousands more registered to make the attempt during the month of May. The results that are turned in are on the honor system.

If you’re wondering why anyone in their right mind would run 30 miles in a day — of their own free will — these South fellows aren’t crazy. They’re intelligent individuals. Sheets is regarded as a mechanical genius and is headed to study at Purdue University and its world-class mechanical engineering program in the fall.

Julian’s thing— besides running — is cars and automotive engineering. When he signs with a college next year, his choice of schools is going to be a place where he can combine the pursuit of both passions. Finding that perfect college fit is probably going to take him out of state, but he’s prepared for that.

While Julian was the first to learn about the Yeti Ultra 24-hour Challenge, he was the last to actually commit to the prodigious project.

“When I told them about it, Tyler and Nolan were ready to do it immediately,” Julian said. “Then Trent said he was in. I was the last one. I didn’t decide until the Thursday before we ran on a Saturday.”

They began the Challenge at 4 a.m. on Saturday, April 18. That meant the other five legs had to begin promptly at 8 a.m., noon, 4 p.m., 8 p.m. and midnight, with that sixth leg coming as a long Saturday melted into Sunday for four weary runners.

The first five-mile leg, in darkness, was run in the Julian’s China Grove neighborhood. It was daylight for the next three legs, one at Sloane Park, one on the Davidson College trails, one in the town of Davidson. It was dark for the fifth leg out near the Price of Freedom Museum between South Rowan and West Rowan, and the final leg was back in Julian’s neighborhood.

“Everything went pretty well, but that last leg was definitely the toughest,” Julian said. “Most of the day, we’d run at an 8:15 mile pace, but then we picked it up ran that last leg at a 6:59 mile pace. We were all sore when we were done, but we made sure to stay hydrated throughout the day. We’re all OK.”

Hunger was the biggest test.

“I really wanted to gorge myself when we were done,” Julian said. “I ate a casserole my mom made.”

Benjamin Frick, Rebekah’s brother and Noah’s uncle, provided a time that is the major motivation for his nephew. In 1994, he ran a record-setting 9:53 in the 3200 in the Rowan County Championships — a mark that Noah has in his sights.

Noah won the 3200 in the Rowan County Championships as a freshman and sophomore and believes he might have broken the 10-minute mark this year. Unfortunately, the county meet was canceled due to COVID-19.

“The day the county meet was scheduled (April 16) was just ideal running weather,” he said. “No wind. Temperature about 55. There would have been some great times.”

He’s not happy about it, but he’s more upset for the seniors in all sports, who lost their final seasons.

“I hate it for my friends on the softball and baseball teams,” Julian said. “I’ve got friends at other schools like (East’s) Adalie Harrison, and I hate it for her. I know I’m one of the fortunate ones. I’ll have another chance next year.”

Julian looks forward to the spring of 2021 when his brother, Eli, will be competing for South as a freshman. A record-setting middle schooler, Eli may provide Noah’s toughest competition if they run in the same events. Which Julian runs which events will be a nice problem for their coach/father to have. South also will still have experienced runners such as Miller and Landon Cromer. Cromer also has a talented brother who will be a freshman.

Julian, Miller, Sheets and Rivers, who plans to compete for Pfeiffer in the fall, finished ninth in the 4×800 relay in the 1A/2A Indoor State Championships held in February. They were looking forward to defending South’s 4×800 title in the Rowan County Championships and trying to qualify for the state’s outdoor meet, as well.

While that opportunity was yanked away, the quartet did manage one final run together in the Yeti Ultra 24-hour Challenge. It’s a run they’ll remember.

Julian was a veritable rainbow of colors the day of the Challenge, but he wore the red and black his school is known for on the last leg.

And that seemed right.