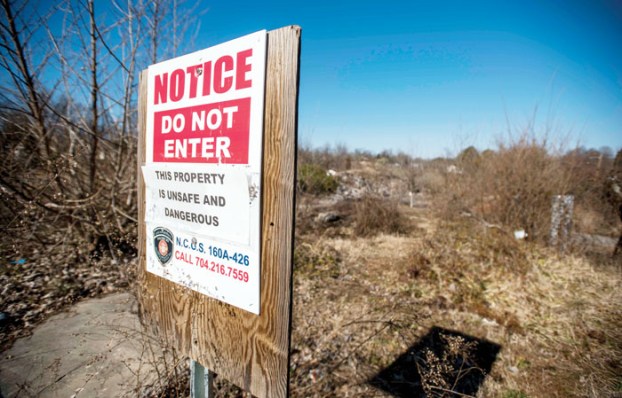 SALISBURY — The former Kesler Mill site will be cleaned up through a $500,000 Environmental Protection Agency grant awarded to the city.

Provided through a Brownfields Grant, the money will remove large debris and contaminants and enable community outreach at the mill site, formerly known also as Fieldcrest Cannon Plant No. 7, at 423 N. Martin Luther King Jr. Ave. Last year, the Salisbury City Council agreed to take over the Kesler Mill site, which allowed the city to apply for the federal agency’s grant. The city estimated the cleanup would cost about $447,000.

The textile mill operated from 1895 to 2003. The mill was demolished in 2009 and debris has remained on the 12 acres since then. The site is contaminated with inorganic contaminants, metals, trichloroethylene, polynuclear aromatic hydrocarbons and petroleum hydrocarbons.

Mayor Karen Alexander said the city is “shovel-ready” to clean up the property.

“It is located beside 25 residential homes whose view is of this rubble site,” she said. “It allows us to improve the public health and safety for our citizens. It also removes an eyesore and it acts as a major catalyst for redevelopment for this site, which is located in an opportunity zone, in the heart of the community.”

It is also a half-mile from Interstate 85 and downtown Salisbury.

On a call with EPA Administrator Andrew Wheeler, Regional Administrator Mary Walker and U.S. Rep. Ted Budd, R-13, Alexander offered her thanks for the grant award.

Wheeler said studies show additional tax revenues generated in a single year after an environmental cleanup can equal up to seven times more than the initial grant award. Property values at homes near grant sites have been measured to increase between 5% and 15% after the cleanup is completed.

The site is currently assessed at $312,000 After the cleanup it is estimated to be assessed at a minimum of $3.6 million. Budd, whose district includes the city of Salisbury, said this increase is particularly important as Salisbury recovers from the COVID-19 pandemic.

“This $500,000 grant will fund a cleanup of those contaminates and make the site ready for development,” Budd said. “What really excites me about this is not just the cleanup but also the economic upside and the fact the site is located in an opportunity zone, which boosts the economic potential even more.”

According to the city’s application, the capital investment to redevelop the property will likely be over $30 million and create 300 temporary jobs and 10-20 jobs directly. The plan for the property would be mixed-use and the community would have an opportunity to share their ideas for redevelopment along with market studies.

Alexander called the rubble site a “blight” on the neighborhood, which depresses home prices and discourages people from wanting to invest in homes in the Park Avenue neighborhood. It also attracts crime. The city council took a risk purchasing the property, she said. But they believed it could be a catalyst for something good happening.

“They don’t make those investments because that is such a huge blight to overcome, and they can’t overcome it, only we can,” Alexander said.

Wheeler said Salisbury, along with other communities selected for the competitive grant, stood out because of the strong support of the local government to help spur further economic development. He said North Carolina communities have received the same grant in the past, which is not surprising “given its history as one of the country’s most important textile manufacturing centers.”

The city previously received a $400,000 assessment grant from the EPA to evaluate former industrial and commercial sites. The environmental assessment was done in December 2015 on the Kesler site. They found localized areas of soil contamination, but the biggest problem was the asbestos found in large debris piles on the site.

The newest grant money will be released after October. The city will hold some neighborhood information sessions prior to clean up activities starting in early 2021.

“For us, this is incredibly significant and what it means to get us to that next level to get us ready to be a site that can be redevelopment, because it can’t right now,” Alexander said.