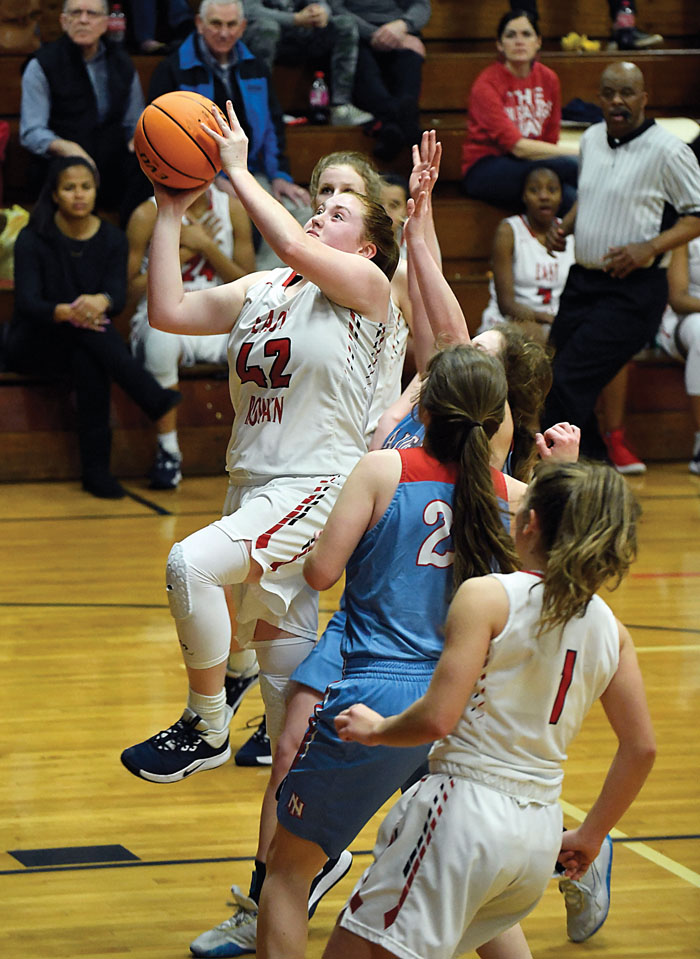 East's Grace Eagle shoots during a game against North Iredell on Feb. 14. photo by Wayne Hinshaw

SALISBURY — Grace Eagle credits a Hall of Fame sportswriter with fixing her shot.

Eagle was a sixth-grader, messing around, shooting baskets, tossing balls toward the rim at the East Rowan Y.

The late Ed Dupree, who adjusted quite a few shooting forms during his time as an assistant coach at Erwin Middle School, spotted Eagle and offered his guidance.

“Coach Dupree helped me a lot with my shot and he also taught me how to use my left hand,” said Eagle, who will graduate from East on May 22.

Eagle became such a proficient shooter that she was 7-for-9 on 3-pointers and scored 25 points for East Rowan one night against Concord her junior year. In another game that season, she was 4-for-5 from bonus range against Central Davidson.

Eagle played jayvee basketball as a freshman and missed almost half of her sophomore season with an injury, but she still scored 601 varsity points for East teams coached by Kevin Holland. She’ll continue her education and basketball career this fall at Central Carolina Community College in Sanford.

“You could see Grace’s potential on the jayvees,” Holland said. “She played so hard and was coachable. She just needed some time to adjust and to gain a little confidence.”

The 5-foot-8 Eagle didn’t score at all in her first varsity game as a sophomore. She had three points in the second one. By her sixth game, however, she was starting to figure varsity basketball out. She scored 15 points against West Stanly, but that’s also the night she was injured.

“That was a tough year for the program,” Holland said. “We were lucky if we dressed 14 players for jayvee and varsity combined. Most nights it was less. Then Grace took a really hard fall right before Christmas. It was unfortunate for her and for us because she was starting to find a rhythm. We definitely missed her.”

Eagle missed 10 games. She made it back onto the court on Jan. 26. She led East’s scoring in the season finale against West Rowan. She scored 14, but the Mustangs still lost by 34. That was a tough season.

The big leap as a player for Eagle came between her sophomore and junior seasons, the summer and fall of 2018.

“She became more determined and dedicated,” Holland said.  “She worked that summer to become a better player and athlete. She started taking weightlifting class at school. That really helped her. More girls should sign up for weightlifting class. All three of our 2020 seniors improved because of their work in the weight room.”

Eagle started the 2018-19 season scalding hot. Six games into that season, she was averaging almost 17 points per game. She started drawing a lot more defensive attention at that point, but she still scored steadily most nights and had a 23-point outburst against West Rowan. She averaged 10.1 points for the season. East went 14-13, a big improvement from 5-20, but the Mustangs still lost nine of 10 regular-season games in the North Piedmont Conference.

Eagle prepared for a senior season that she hoped would be a turning point for the program.

“I worked on my quickness with agility drills and worked my defense,” Eagle said. “After practice, I’d run some more. I was always looking to do more work, looking for ways to improve.”

East added such a strong freshman class for the 2019-20 season that Eagle’s averages dropped a little to 8.4 points and 3.4 rebounds per game as a senior, but she didn’t mind fewer minutes and fewer shots because the Mustangs won 20 games and went 7-3 in the NPC. Eagle shot solid percentages — 47% from the field, 34% from 3, 67% from the foul line.

Holland started sending film of Eagle to schools shortly after her junior season. That got some results.

Central Carolina got interested. That led to exchanges of emails and a visit to the school. Eagle made a decision back in January. Holland said some D-III schools expressed interest in Eagle later in the season, but she was comfortable with her first choice.

“I was thrilled for her,” Holland said. “She’s come so far during her time at East.”

Eagle said the highlight of her senior season was a 51-43 win against West Rowan in January. There also was a 40-point romp on Senior Night, when Holland got to take Eagle and fellow seniors Adalie Harrison and Caroline Houpe out of the game together, as a packed house roared its appreciation for the senior class.

“We couldn’t have had a much better season, 20 wins, great coaches and a great team bond,” Eagle said. “It will always be very special. I made friends for life.”

Eagle’s father is a pastor. She lists her favorite activities outside of basketball as singing and church.

Her goal is to become a teacher and coach. Central Carolina, a two-year program, will help her get her college education started, and it means she’ll get to play basketball for at least two more years.

She’ll be an asset at Central Carolina, not just for her shooting ability, but for her contributions to team chemistry.

“She was always a good teammate, but I think this past season she became a great teammate and took on more leadership responsibility,” Holland said. “She was always cheering for her teammates. She really tried to help our younger players, and she’s a natural teacher. She’s humble and fun to be around.”

And that shot that got fixed a long time ago?