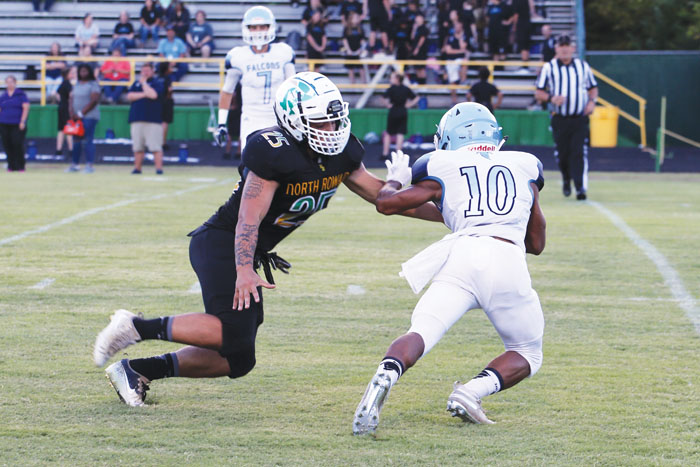 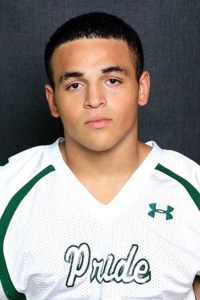 But after getting on the field in the opener long enough to make four tackles and break up two passes, he did start his second game for the Pride.

And quite a few more after that.

“I had some good hits in that first game and forced a fumble on my first college tackle,” Patterson said. “I remember I was in the weight room and the coaches came in and told me I going to be starting the next game. They liked my hustle.”

Patterson started games at outside linebacker and played on special teams for the Pride. He turned in a promising year for a true freshman — 36 tackles, with 3.5 tackles for loss, but a 1-9 season drained some of the joy out of the experience. Patterson had grown accustomed to winning at North Rowan.

So the 5-foot-11, 190-pound Patterson is transferring. He’ll play next season for Presentation College, an NAIA school in Aberdeen, S.D.

“Just looking for a better situation,” Patterson said. “It’s a long way from home, but it’s a really good opportunity.”

It’s a small school, about 800 students. Presentation College started competing in athletics in 1995 and, like Greensboro, it went 1-9 in 2019. Presentation’s colors are green and gold, the same as North Rowan’s. The school’s athletic teams are known as the Saints. The mascot sounds interesting — a Saint Bernard named “Spirit.” Presentation didn’t have any players from North Carolina last season, but the Saints did have a lineman from South Carolina.

As an NAIA school, Presentation College can give Patterson football scholarship money, which D-III Greensboro couldn’t. That’s a factor in the transfer. Patterson said he’ll also be getting academic money. He has a background as a solid student. He said he maintained a GPA in the 3.2-3.3 range at Greensboro.

Patterson wasn’t able to visit the Presentation campus, so he’s only had the virtual tour, but he liked what he saw. Presentation College shares an impressive turf football stadium with the local high schools.

When Patterson started playing football with the Salisbury 49ers as a third-grader, he didn’t expect to play any games in South Dakota, but a lot can happen in life. The early fall is beautiful in South Dakota, but it’s probably going to be chilly for Presentation College’s November contests.

Patterson was an exceptional athlete in three sports at North Rowan and was named the school’s male athlete of the year as a senior.

In football, he was team captain, the team’s leading tackler, the 2018 Yadkin Valley Conference Defensive Player of the Year and the Cavaliers’ Golden Helmet winner.

He threw the shot put a respectable 44 feet, 8 inches, and finished ninth in the 1A Track and Field State Championships last spring.

He also was the Yadkin Valley Conference wrestling champion at 182 pounds.

Now he’s getting ready to tackle the next challenge — roughly 1,440 miles from home.

“I’m preparing with push-ups and sit-ups and running,” Patterson said. “I’ll be ready when it’s time to go.”

High school track and field: East sprinter has all…