New owners to take over Tamarac Marina in June with plans for a facelift, other changes 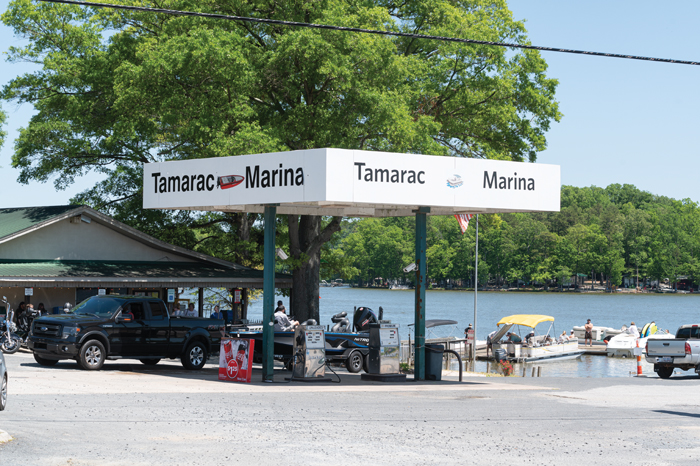 Josh Bergeron / Salisbury Post - Boaters load up for a day on the lake and fill up on gas Saturday at Tamarac Marina, which has been sold by longtime owner Dan Black.

HIGH ROCK LAKE — After owning and operating the Tamarac Marina at High Rock Lake for nearly 15 years, Dan Black says he feels confident in turning over the legacy to longtime friend and fishing bait supplier Brad Beck and his wife Michelle.

Beck and Michelle have been learning the ropes of the business lately and are set to officially take over in June.

The marina, located at 9120 Bringle Ferry Road, provides access to High Rock Lake as well as boating and fishing supplies and gasoline. The marina includes a campground with a number of tent sites as well as a number with full hookups, is open year-round and welcomes pets. The marina’s restaurant is open seven days a week, serving breakfast, lunch and dinner. An exception is Wednesday when it doesn’t open until 4 p.m.

Black said he was ready to retire late last year after operating the marina since February 2005. When he bought it, the marina was closed, but Black developed it and added a campground.

“I knew (Brad) and his wife would do just fine,” Black said.

Brad said Black and his fiancee, Sandy, have done a wonderful job of building the business to what it is today. He added that, despite the pandemic, business has been “very busy and very good.”

The timing of the deal worked out well. Brad had just moved on from his business, Big Cats on the Lake, on Badin Lake in September due to an increase in the price of rent. Brad said he received the initial call to buy and take over the Tamarac Marina in October.

He added that he had been stocking the marina with live bait and tackle over the course of 15 years and saw Black about 2-3 times per week.

Brad and Michelle, residents of Davidson County, plan to give the marina a facelift by providing brand new docks, plenty of parking, boat slip parking for customers and, potentially, boat rentals.

Additionally, though the pandemic has forced the restaurant to only provide to-go orders, the community has been supportive by purchasing meals, nonetheless. Brad said he is “shocked at how busy it has stayed” and appreciates the support from the community that has welcomed them.

Black has been helping Brad and Michelle learn the ropes to take over in June by educating the couple on how the docks work and how the equipment and gasoline access works. The transition has been smooth despite the pandemic, Black said.

Brad and Michelle are eager to get back to normal, but say they want to assure the community it will adhere to limitations set by state officials. He added that they’re “happy to serve on a limited basis” until stay-at-home orders are lifted.

Black said he wants everyone in the community to support Brad and Michelle the way people supported the business during his tenure as owner.

And despite changes, the couple want to ensure the marina’s legacy is maintained.