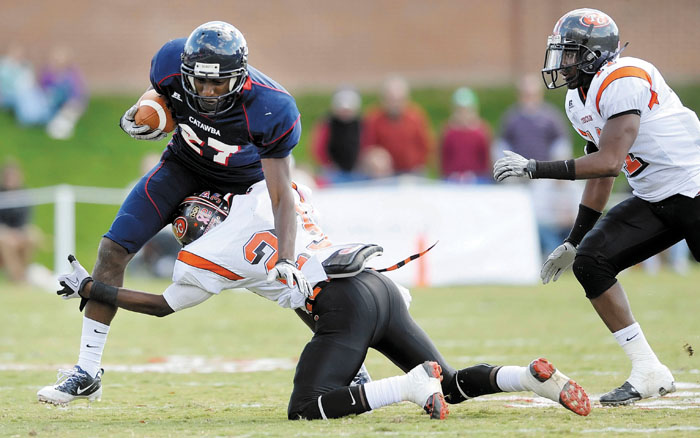 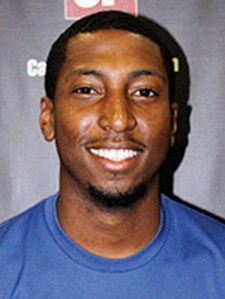 “Everything is kind of at a standstill now with the coronavirus situation,” Morman said. “So you watch film. You talk on the phone to coaches. You make sure your staff is taking shape. We’ve held virtual position meetings.”

Morman is only 30, but he already has five seasons under his belt as a high school head coach — two at 2A West Stanly, three at 4A North Meck. There’s a lot of life experience wrapped up in that combination. West Stanly and North Meck don’t have much in common.

The worst part of being a football coach is usually all the hours spent away from family, but that’s less of an issue during this spring of COVID-19. Morman gets to see a lot of his 3-year-old daughter — she’s already crazy about football and cheerleaders — as well as the son he and his wife welcomed into the world in March. He met wife, Kelly (DePompa), who played soccer for A.L. Brown and the Charlotte 49ers, while they were coaching at A.L. Brown.

Any Morman story has to include a revisiting of the events of Oct. 10, 2009, in Jefferson City, Tenn., at Carson-Newman’s Burke-Tarr Stadium. That Saturday tells an awful lot about who Morman is, how tough he is, how determined he is.

Morman was a sophomore in 2009 and was Catawba’s third receiving option. When the Indians headed to Carson-Newman they had lost two in a row despite the presence of Cam Sexton, a celebrated transfer quarterback from UNC. Morman had wrecked an ankle two days before the Carson-Newman game when the Indians were working on special teams. On Friday, he couldn’t run at all. On Saturday, he was still limping, right up until game time, but then adrenaline kicked in, and he was on the field, and he was sprinting.

Catawba’s head coach then was Chip Hester. Hester’s quote after that game was, “Eric is very mentally tough. He doesn’t care if he’s missing a finger. He’ll still say he’s all right.”

Sexton was knocked out of that game in the second quarter, but next-man-up Patrick Dennis would throw for 311 yards in a 41-31 loss. A lot of his passes went to Morman, who came through with 13 catches (tying Catawba’s school record at the time) for 128 yards and a TD.

“Most of my catches were on the same route combination,” Morman said. “One of the things I’ve learned in football — until they stop it, until they adjust to it, keep running a play that’s working.”

Morman would enjoy talking about that game a whole lot more if Catawba had won it. As it was, his massive effort on a bum ankle became a part of Catawba lore.

Dennis said after that Carson-Newman game, “Eric is that steady guy for us. He’s not a roller-coaster player. He’s not up and down, all over the place. He pays attention to detail, runs the right routes.”

The guy who runs the right routes — that’s Morman. It’s made him a successful coach.

He grew up in Richmond County, home to one of North Carolina’s traditional powerhouses. Huge school with huge talent and a huge fan base. Richmond was stout enough that Morman wasn’t a full-time starter until he was a senior. A lot of people figured Morman was better at baseball than football. His left-handed cousin, Alvin, had pitched in the major leagues.

Morman played both ways on the gridiron for a while, but Jack Britt’s 220-pound back George Bell (who played at Virginia Tech before transferring to Catawba) plowed Morman on a kickoff. It was all offense for Morman, after that.

While Eric was making a slow climb at Richmond, his older brother, Charles, was starting at defensive back for Catawba.

“I was at all the Catawba games, watching Charles play DB and idolizing the Catawba receivers,” Morman said. “My recruiting decision came down to Catawba, Wingate and Lenoir-Rhyne. Wingate was a little too close to home. Lenoir-Rhyne was triple-option, and I wanted to catch some passes.”

Officially, John Fitz, who is now the head coach at East Rowan, was credited with recruiting Morman for Catawba.

Catawba expected Morman to aid the receiving corps, but no one expected him to make the impact he did. His work ethic was impressive. He added 25 pounds of muscle while he was in Salisbury. He’s still in the top 10 in Catawba history with 129 receptions (for 1,399 yards).

“Catawba was awesome for me,” Morman said. “The coaches had a big influence on me, and I’d known for a long time that I wanted to stay involved in football after college.”

Morman got his first chance as a position coach with the A.L. Brown DBs. That was in 2012.

“Great opportunity to work under Coach (Mike) Newsome and for a program so well-organized,” Morman said. “It was a chance to work on the defensive side of things and to learn from an experienced guy like (defensive coordinator) Noah Lyon.”

Morman liked A.L. Brown and the Wonders liked him, but they didn’t have a P.E. position available, so he moved on after a season.

West Stanly was being coached by James Johnson, whom Morman knew well from Richmond County. Morman was hired by West Stanly and made the commute from his home in Concord to Oakboro to coach receivers and to teach P.E.

When Johnson stepped down, Morman was hired as West Stanly’s head coach two months before the 2015 season started. He was 25 years old. He’d gone through the interview process mostly just to get the experience. He not only got the experience, he got the job.

He made impressive progress with the Colts — 3-8 the first year, but 7-5 his second year, with a competitive playoff loss.

Then North Mecklenburg hired him. He commuted from Concord to Huntersville. He spent three years in 4A, coaching against heavyweights such as Mallard Creek, Vance and Hough.

In storybook fashion, his first North Meck team in 2017 went 9-4 and actually won a road game at Richmond in the first round of the state playoffs.

“Going back home for that Richmond game, coaching against some family members in front of a huge crowd, seeing that stadium for the first time as a visitor, it was all just an unbelievable experience,” Morman said. “I did a lot of interviews that week.”

“Obviously, 1-10 humbles you, but there’s something to learn from every season,” Morman said. “We’d graduated those kids who had won and we just didn’t have the linemen. You can have all the skill guys in the world, but games are still won by those guys in the trenches.”

Morman was hired by Northwest Cabarrus in March, so after six years on the road, he’ll finally get to coach at a school close to home.

He’s brought two staffers from North Meck to Northwest. One is William Fly, regarded as one of the state’s top strength and conditioning and offensive line coaches. He’ll be Northwest’s version of A.L. Brown assistant Todd Hagler.

“Coach Fly is going to be an asset not just to the football program, but to the entire school,” Morman said. “That’s one of the things I took away from my time at A.L. Brown. Success starts with the weight room.”

“Northwest had 17 or 18 seniors last year, and I’ve watched the film, so I know how good those guys were and how big they were upfront last year,” Morman said. “We’ll have a young team, but we do have talent. We’ve got an opportunity to be pretty good.”

Morman likes for his quarterback to run the ball. He also wants to throw it around, but in some ways he already sounds like an old-school guy at 30.

Exciting matchups are on the horizon, like the one against Newsome and the Wonders. Morman says he’ll do his best to treat it like it’s just another game.

He’ll do fine. He’s young, but he’s always been that steady guy who runs the right routes.