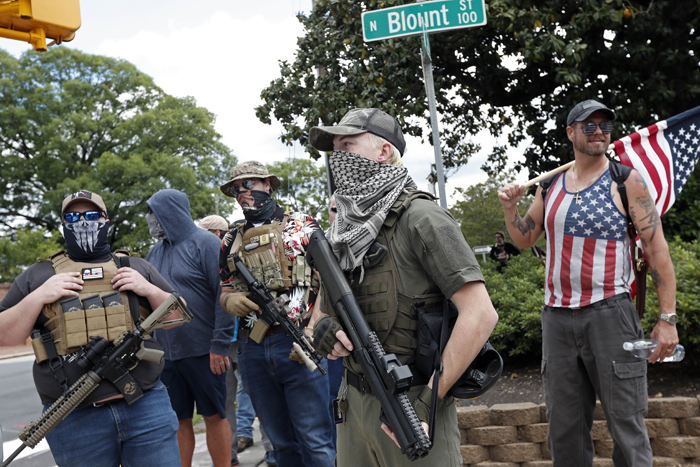 People holding weapons stand on a street corner in Raleigh, N.C., Friday, May 1, 2020. About a dozen demonstrators marched Friday afternoon around the area of the Old Capitol, Legislative Building and Executive Mansion. Several had visible firearms. It was not immediately clear what specific issues they were protesting, as none carried signs. A Facebook post calling for a rally on Friday morning had said it was to promote constitutional free speech and gun rights. (AP Photo/Gerry Broome)

RALEIGH (AP) — North Carolina House and Senate leaders on Friday said they still had work to do before finalizing a two-bill package to address immediate COVID-19 needs, but had agreed on how much federal relief money to spend initially.

Negotiators from both chambers settled on distributing slightly over $1.5 billion of the $3.5 billion that North Carolina received from Congress in the $2 trillion coronavirus relief law approved last month, according to legislative leaders and staff.

But they had yet to resolve all of the policy differences contained in the competing packages, causing them to delay final votes anticipated for Friday. Republican House Speaker Tim Moore and Senate leader Phil Berger said they were hopeful votes would occur Saturday.

The amount being distributed was essentially the midway point between the $1.7 billion House proposal and $1.3 billion Senate plan that the respective chambers approved this week. Democratic Gov. Roy Cooper, who would be asked to sign the legislation, had requested $1.4 billion.

“The priorities are met, and I would predict that you’ll see yet another unanimous or nearly unanimous vote in both chambers,” Moore told reporters. The final total omits $1.2 billion in federal funds from other congressional legislation already heading to state agencies.

Details on how the $1.5 billion would be earmarked weren’t released Friday. But funds were anticipated to expand COVID-19 testing and contact tracing, purchase more personal protective equipment, assist food banks and public school nutrition programs, and give attention to rural hospitals and outbreaks in nursing homes.

There was also money to ensure at-risk children would get special instructional help in early August to make up for lost time with K-12 schools shuttered this spring. Differences had emerged over how much money to send to the public schools for remote learning, to give to a low-cost loan program for small businesses and to provide to universities for COVID-19 research.

On policy, the House wanted to expand Medicaid coverage temporarily for COVID-19 testing and treatment to people making as much as twice the poverty level, and provided $40 million toward the state’s share of expenses. Moore said the money was no longer necessary because other federal funding could cover it. But Berger, who has been a longtime critic of Medicaid expansion, wants the policy language removed as well.

“Let’s not kid ourselves, there are a lot of (policy) differences,” Berger said. “But then again, there was a lot of difference as far as the money is concerned, and we were able to get that worked out.”

While the House wants language so restaurants with alcohol licenses closed for in-person dining can sell take-out mixed drinks, Berger said senators don’t think the item should be within a consensus package.

Mandy Cohen, Cooper’s health and human services secretary, said later Friday the administration was largely pleased with lawmakers’ funding priorities, and that the money would be released quickly.

The vote delay further extends the first week of the annual session, which began Tuesday. Hundreds of residents who want Cooper’s stay-at-home order lifted rallied in front of the Legislative Building and Executive Mansion on that first day.

On Friday, about a dozen demonstrators marched around the two buildings and the old Capitol. As many as six had visible firearms, including one with a pistol and several with long guns. The group marched peacefully and left in the afternoon about two hours after marching.