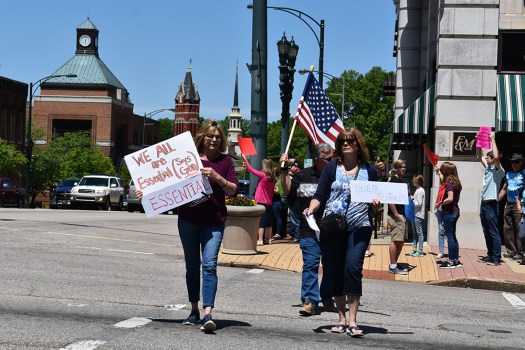 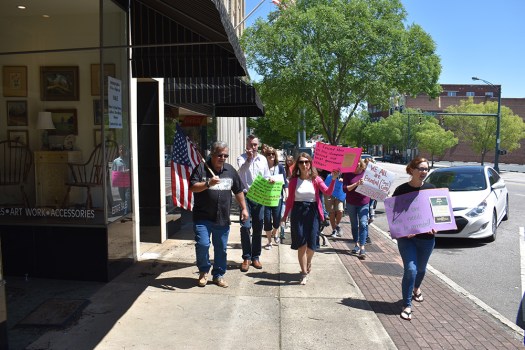 Protesters walk up North Main Street to the square. 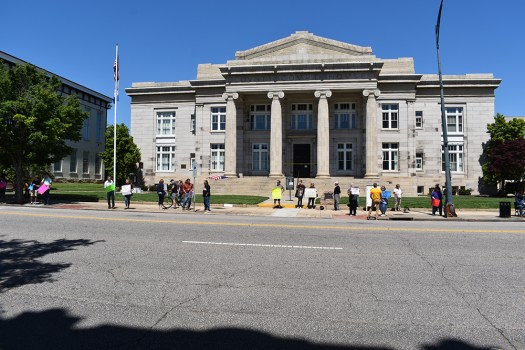 Protesters gather in front of the Rowan County Courthouse to demand the county to reopen and end the statewide stay-at-home order. 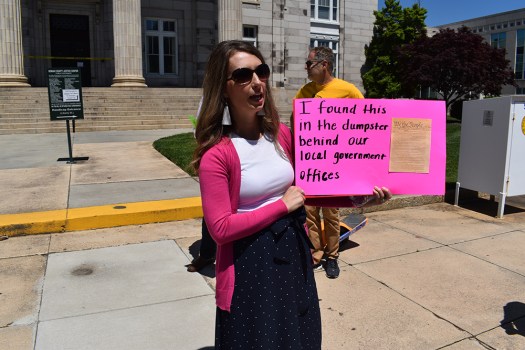 Elizabeth Hilton, the organizer of Saturday's protest, hold up her sign. She said not being able to attend church because of the governor's order is her driving force.

SALISBURY— With less than a week before the governor’s stay-at-home order is set to expire, about 20 local resident protested Saturday for the county to reopen.

Gov. Roy Cooper announced a statewide stay-at-home order to slow the spread of COVID-19 that started on March 30 and has since been extended to Friday. The order allowed for essential businesses to stay open, such as grocery stores, pharmacies, hardware stores and restaurants that provide take-out, drive-thru or delivery. Non-essential businesses can stay open if they follow social distancing rules.

The local protest comes after statewide Reopen NC rallies in Raleigh and after other counties followed with their own local rallies.

“Enough is enough,” Hilton said. “Our county leaders need to step up and do what when they took an oath of office part of that was to uphold the constitution. They have not done that.”

Hilton said it is not any elected leader’s job to determine what is essential and non-essential.

Hilton said counties, rather than the state, should have authority to decide when to reopen. She said Salisbury Mayor Karen Alexander, Mayor Pro Tem Al Heggins and County Chair Greg Edds should be at the rally and should be in support of ReOpen NC. Sen. Carl Ford posted in the Facebook group for Reopen NC – Rowan that he was in support of Saturday’s rally and that he would have attended in the N.C. General Assembly wasn’t in session.

Dan Belcher, of Rockwell, questioned why the commissioners didn’t come out to the rally. He said it was cowardice.

“We will address this at the next election,” he said.

Hilton said churches, in particularly, are targeted in the governor’s executive order.

Mikey Wetzel, the owner of Go Burrito in downtown Salisbury, joined the protest. Wetzel said the economic toll will hit hard for years and money that could have been generated during the stay-at-home order will never truly come back.

He said the executive orders are not logical because people can still buy a lottery ticket, alcohol and cigarettes.

“The logic isn’t there,” Wetzel said. “You can’t talk about logic. It’s an emotional topic.”

Wetzel said supporters of Reopen NC are called evil and that they are killing people. He feels differently.

Kaye Kitchen, of Salisbury, said she and other senior citizens have the right to go to church and that her right has been taken away.

Kitchen said she misses taking her grandchildren to the park, library and museum, which she says are also essential.

As the protesters stood at the courthouse, some drivers honked as they passed by. Some yelled out thanks and one car circled with a poster as a counter-protest. The group walked to the square. One driver yelled out “idiot.”

Belcher yelled back, “We’re fighting back for you.”

Belcher said he wants people to understand he and the other protesters weren’t angry; they are heartbroken. As a self-employed worker, business is down.

Hilton said she doesn’t live in fear and was not concerned about passing the virus as they protested. The protesters were somewhat spaced out from one another. No one wore a mask.

Hilton said she supports herd immunity. She said vaccinating children should be a personal choice.