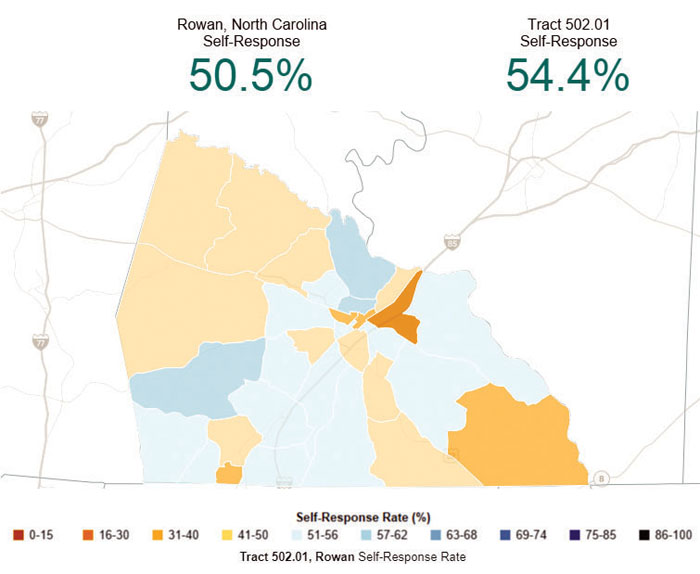 This map, which shows the Rowan response rate for the 2020 Census, is one of those available on my2020census.gov.

SALISBURY — Rowan County has reached a 50% self-response rate to the 2020 Census, and the U.S. Census Bureau wants to increase the responses during the “Virtual Weekend of Empowerment” Friday through Sunday.

The state’s response rate goal for the 2020 Census is 82%, which would be higher than Rowan’s rate once Census workers began roaming the community in 2010. The final 2010 rate was 73%.

The U.S. Census Bureau will start a social media campaign to #AvoidTheKnock, which asks people to respond to the 2020 Census before workers are asked to visit residences to decrease the amount of in-person interactions during the COVID-19 outbreak.

Under the adjusted 2020 Census operational plan, field activities would resume after June 1, as area census offices begin returning to full staff capacity. In-person activities, including enumeration, office work and processing activities will incorporate the most current guidance from health authorities.

Census takers were to follow up with non-response households on May 13-July 31, but interviews will now be held Aug. 11-Oct. 31.

April 1 was the day census takers count homeless people who live under bridges, in parks and in all-night businesses, but it was postponed. The U.S. Census Bureau has not yet determined a new date.

Group quarters began responding on April 2, but the schedule was extended to Sept. 3.

Each person who responds to the 2020 Census helps their community secure its fair share of more $675 billion dollars in federal funding for roads, schools, health care services and other programs.