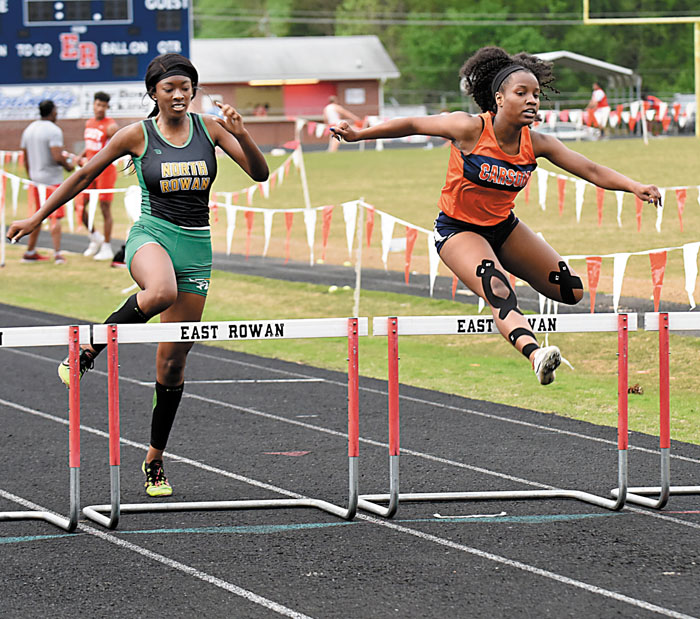 Carson's Brianna Hargrove wins the 300 meter hurdles as North's Lakayla Birst comes second during a meet on April 17, 2019. Photo by Wayne Hinshaw, for the Salisbury Post

GRANITE QUARRY—  Ordinarily the East Rowan High track would’ve been a beehive of activity and a cornucopia of colors on Wednesday, with the navy blue and gold of South Iredell, the lighter blues of Statesville and West Rowan, the reds of East Rowan and North Iredell, and the orange of Carson mingling in the festival known as the North Piedmont Conference Championships.

But there was no firing of starter’s guns, no screams of anguish and relief at the finish line, no laughter from winning relay teams.

Track and field, like the other five spring high school sports, was silenced by the coronavirus shutdown. There will be no NPC champions crowned this year.
The Rowan County Championships, a tradition and an institution since 1969, fell by the wayside two weeks ago.
It’s hard to say who would have won the Rowan County boys competition this year.
It was an exciting four-team struggle in 2019 between winner West Rowan and contenders East Rowan, South Rowan and Carson.
Salisbury was barely in the stadium last April, but that would’ve changed in 2020. The Hornets had their football team, the 2AA state runners-up, out for track. The Hornets still had some distance holes, but they would’ve been a factor. Maybe they would’ve won their first boys county championship since 1987.
As far as the Rowan girls, it’s likely that Carson was the program deprived of banners by COVID-19.
Carson’s girls would’ve been favored to take their fourth straight county championship, as well as their third straight NPC championship.
Carson, which has seen its winning point totals in the Rowan Championships climb each year — from 161 in 2017, to 187 in 2018, to 191.5 in 2019 — was going to contend in just about every event.
Carson’s girls only got to compete in one meet before the season was shut down — at West Rowan on March 12, but coach Les-lee Ihme saw enough to make her heart soar like Isabelle German going over the high jump bar.
The secret weapon for the Cougars was going to be sophomore Aliayah White, who didn’t compete in track and field as a freshman.
In her debut meet, she ran sprint times comparable to the ones the Gadson twins, Mikaila and McKenzie, turned in for Carson champions in recent seasons.
“In that meet at West, Aliayah was Gadson-fast,” Ihme said. “She’s also a really good high jumper.”
So is German. She was going to place well in the county in the high, long and triple jumps.
Carson had an army of sprinters ready, in addition to White. Malia Hughley placed third in the county in all three individual sprint races last season, and she was back. Also back in action were Brianna Hargrove and Jynasia Chambers. Hughley, Hargrove and Chambers were three-fourths of the county champion 4×200 team in 2019. Zoe Holbrook had been added to the list of sprinters.
Hargrove was going to score major points in the hurdles. She won the 300 hurdles last year, while placing third in the 100 hurdles. She was second in the pole vault.
“Brianna had really been working on the hurdles when the season was stopped,” Ihme said. “In the only meet we had, she ran times that showed how much improvement she’d made from last year.”
Carson had Iyonna Parker back. She was county champion in the shot put and discus in 2019. The Cougars had added Evona Parker to their throwing depth.
“We were going to be so strong in the throws,” Ihme said. “We had the Parkers and Lani Isley and Krystal Sanns.”
Isley is a versatile athlete who was doing track and soccer this spring. She was the defending county champ in the triple jump and placed second to Iyonna Parker last year in the shot put. She also ran a leg on a second-place 4×800 team in 2019.
Carson was going to rack up substantial points in the middle distance and distance races. The leader would’ve been Kimberly Barrera, who placed in the Rowan Championships in the 800, 1600 and 3200 a year ago. She won the 800 in the NPC Championships.
“We were going to have a really good 4×800 squad with Kimberly, Brynn Sokolowski and soccer players Taylor Conrad and Makayla Borst,” Ihme said.
Megan Deal (third in the 3200 last year) and Carly Green had steady indoor track seasons, and Tori Lemasters was going to do well in the longer races.
Ihme said Carson had a number of talented newcomers that were still finding their roles.
“As much as I hate this for the seniors, I also hate it for our young people,” Ihme said. “They really needed this year to develop, so how things go in the future for us is going to be interesting.”
Even though Ihme didn’t get to see four of the other teams, she does believe the Cougars would have made it four in a row in the county.
“East always has good athletes and South had a big squad and there could have been some surprises,” she said. “But I do believe we would have been county and conference champs again. We had strong senior leadership. It’s really a shame.”‘
•••
East girls — Sprinter Azaria Jones and versatile Cyanah Barger were leaders for the Mustangs. Adalie Harrison would have been a threat to win the 800 and 1600 in the county. East had good relay teams.
South  girls — The Raiders lost a lot of firsts with the graduation of  Madison Lowery and Janiya Downs, but the Raiders still had Taylor Chapman (defending county champ in the 100 hurdles), sprinter/jumper Carlie Moore and discus thrower Kira Rymer. South won three relays in the 2019 county meet and had quite a few of those people back.
Salisbury girls — Leah Cressler was going to be strong in the 800 and 1600, while Kalijah Moody was going to be tough in the high jump.
North girls — Destiny Crawford, a sprinter/jumper, was leading the Cavaliers.
West girls — The Falcons were getting good performances from sprinter Katelyn Lentz and jumper Dreamah Mason.