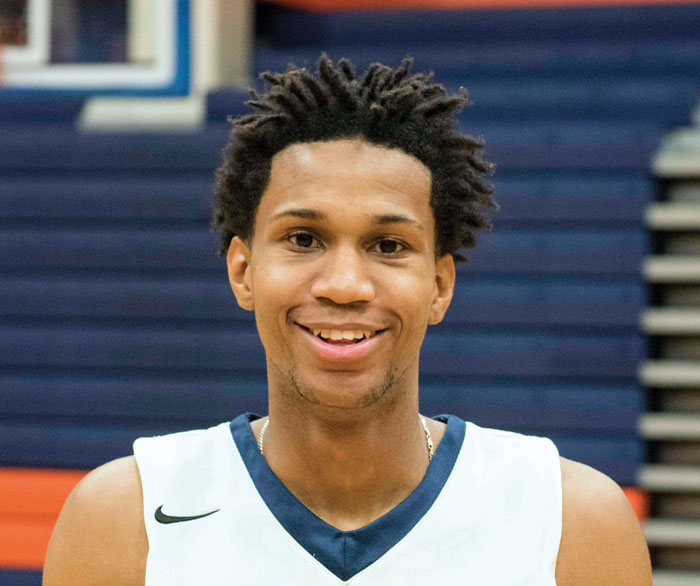 Headshot of Jamarius Hairston at Carson in 2017.

Lees-McRae is located in Banner Elk, N.C., 3,701 feet above sea level, the highest elevation of any college east of the Mississippi.

Folks who like to ski head up that way to Sugar Mountain.

But the hoopers like to call it Dunk Mountain. The Lees-McRae Bobcats and fiery coach Steve Hardin have taken that unique nickname, and they’ve run with it.

The 6-foot-4 Hairston, who had 10 offers when all was said and done, should fit right in. He picked Lees-McRae last week, which meant saying no to Livingstone, Shaw, Bluefield State, UVa-Wise, Auburn-Montgomery, Young Harris, Barton and Southern Wesleyan.

Southern Wesleyan, the 10th school to offer Hairston, and Barton are teams that compete with Lees-McRae in Division II Conference Carolinas.

“I want to make an impact, and Lees-McRae gives me the best chance to make a big difference for a program,” Hairston said.

This will be Hairston’s third stop since graduating from Carson High in 2018 after a stellar senior season that included 26 wins, co-player of the year honors in Rowan County and the MVP award for the Dale’s Sporting Goods Sam Moir Christmas Classic. Hairston scored 1,659 career points for coach Brian Perry’s Cougars, second-best total in school history.

He had to play mostly in the post for Carson, so he had just one offer out of high school — from Lander University. Things didn’t work out for him at Lander, but he rediscovered his mojo during a stellar 2019-20 campaign at Davidson County Community College where he led the Storm to a dynamic 31-1 season. He averaged 20.2 points with excellent shooting percentages (40-plus from 3; 80-plus from the foul line) and added 5.8 rebounds per game. He was an All-American.

“One college offer out of high school, but 10 offers two years later coming out of junior college, so I’ve improved,” Hairston said. “I think I’m going to the school now where they value my game the most. Coach Hardin recruited me for a long time and he talked a lot to Coach Ridge. He came to see me play late in our season and offered me in January.”

Because of the recruiting limitations brought on by COVID-19 concerns, Hairston never got to visit the Lees-McRae campus, but he’s comfortable with his decision.

“I’ve been on a few vacations to the mountains,” he said. “I like it.”

Hardin’s system should be the ideal fit for Hairston, who is more of a runner than a grinder. Lees-McRae is uptempo, to say the least. The Bobcats averaged 92.2 points per game in 2019-20, sixth in Division II. The team wasn’t great, but it was good — 18-11 overall and 11-9 in Conference Carolinas.

“They’re fast-paced and like to score in transition, and that’s my game,” Hairston said. “I think they’re a program that will take advantage of my versatility. They’ll mix it up and play me in different positions.”

Hairston is primarily a 3-man, a small forward, but he shoots and handles well enough to play the 2 if the Bobcats want to go bigger and he could even play minutes at the 4 if they want to play small and really quick.

Hairston is a strong student and will major in business at Lees-McRae, but his career ambition is to play professional basketball overseas.

“I built up a lot of momentum this past season at DCCC,” Hairston said. “Now I’ve got to keep that momentum going for two seasons at Lees-McRae. They’ve had a lot of their guys go on to play ball overseas. That’s my goal.”