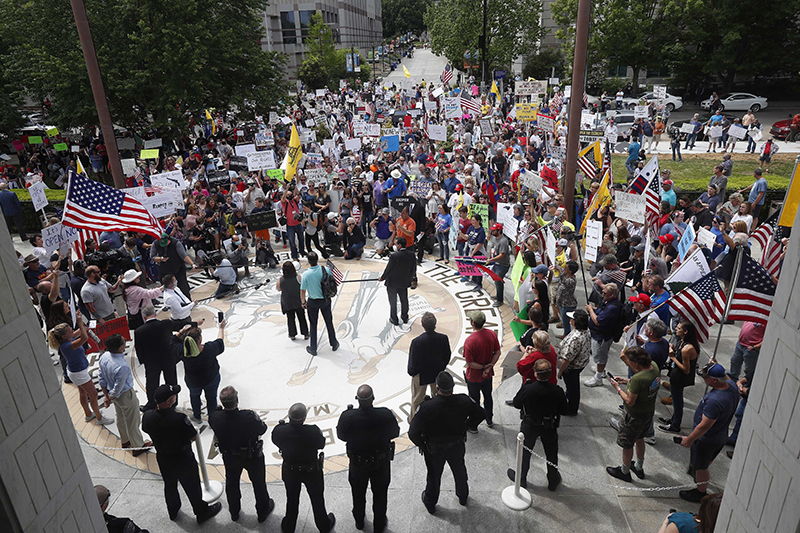 House Speaker Tim Moore and Senate leader Phil Berger gaveled in their floor sessions with about 20% the 170 legislators present, a contrast to full chambers on a traditional session’s first day. Absent lawmakers either were in their offices or working from home for now to avoid high-risk activities. A few on the floor wore face masks.

For now, committees in both chambers will occur online, and House floor votes will be staggered to prevent crowded conditions. The Legislative Building is closed to the public, with only journalists and sergeants-at-arms in the galleries.

“It’s going to be different,” Moore told reporters. “Just as folks in their personal lives, in their families and their businesses, so to in government. We’ve had to make adjustments as well.”

Even with in-person legislators scarce, hundreds of demonstrators angry with Democratic Gov. Roy Cooper’s extended statewide stay-at-home order greeted them as a large “ReopenNC” group rallied for a third Tuesday in a row. This time they expressed their grievances in front of the Legislative Building, apparently to seek support from lawmakers. They questioned the logic of Cooper’s order for devastating businesses, while allowing large retailers and other “essential” activities to continue.

“I’ve worked since I was 15 years old,” said Beth Nix, 53, of Denver, North Carolina, who was laid off last month on the second day of a new job at a boutique store for pets because of the restrictions. “This is the first time in my life that I’ve not been able to work.”

Some demonstrators ended up in front of the Executive Mansion. Ashley Smith of Morganton, a ReopenNC co-founder, was one of four people arrested by State Capitol Police there, according to magistrate documents. They were charged with violating Cooper’s executive order on mass gatherings without proper social distancing and refusing to step away from the Mansion fence and sidewalk. A Union County man among the four also was charged with damaging a Mansion gate, a police spokesman said Tuesday evening.

Smith’s husband, Adam, said in an interview that his wife stepped on the sidewalk after being told not to do so in civil disobedience.

Earlier Tuesday, Smith called on Cooper to eliminate his order by Friday. She dared the crowd to begin opening up their businesses and going to church, saying they’re the victims of complying with the order.

“We’ve played by all the rules, and now we’ve been cast aside,” Smith said. “Today, I say no more … I’m essential. You’re essential. We’re all essential.”

Republicans at the legislature are empathetic to the protesters and have urged Cooper to accelerate or alter his three-phased approach to reopening. But there’s little appetite to challenge his orders with counter-legislation.

Cooper said Tuesday he understands that people are out of work and “a lot of families are hanging by a thread,” which is why he’s pressing for unemployment benefits and loans for small businesses. But public health is first and foremost, he said.

The House and Senate, with input from Cooper, are aiming to push through by week’s end legislation to spend federal funds to expand coronavirus testing, purchase additional personal protective equipment and prepare relief for local and state government agencies drained of projected revenues. Proposed legislation also would delay car inspection and driver’s license renewals and cancel interest on pending tax bills once due April 15.

House members in committees on Tuesday afternoon began advancing legislation that include many elements of the $1.4 billion package sought by Cooper.

While Cooper, Berger and Moore have talked bipartisanship and consensus in passing legislation quickly, some details will still need to be hammered out. House proposals, for example, would spend about $1.7 billion, according to Moore.

Senate leaders late Tuesday rolled out a broadly bipartisan bill that Berger’s office said spends or puts in reserve $2.4 billion. As for differences in spending levels, Berger said: “I’m optimistic that we’ll be able to bridge whatever gaps might exist.”

In differences from the House legislation, the Senate bill would raise the maximum weekly state unemployment benefit to $400 when new federal benefits expire. But it leaves out a House provision that would have temporarily expanded Medicaid coverage to more people for COVID-19 treatment. Berger said federal money already going directly to medical providers will treat the uninsured.