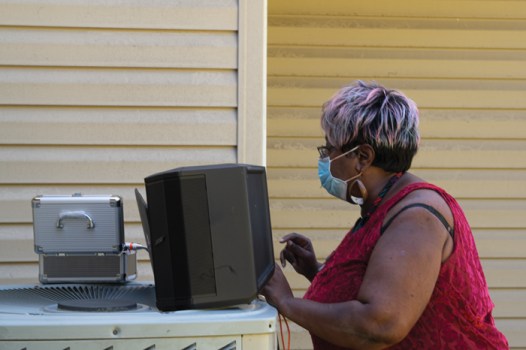 Josh Bergeron / Salisbury Post - Pat ‘Mother Blues’ Cohen sets up her speaker and musical accompaniment Monday as she prepares to sing to her brother who lives in the Citadel nursing home and other residents on Monday. The facility is the site of a large COVID-19 outbreak. 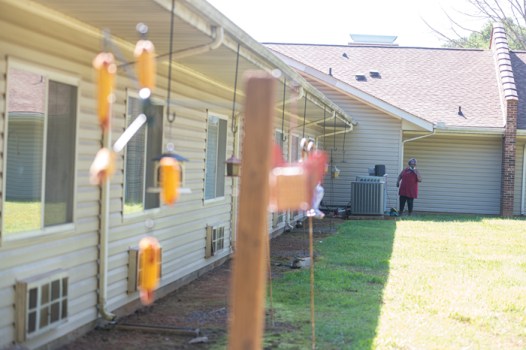 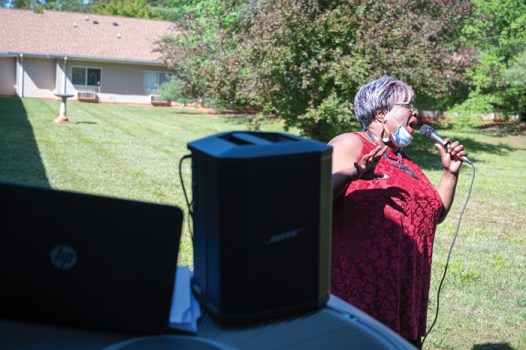 Josh Bergeron / Salisbury Post - Pat ‘Mother Blues’ Cohen sings to her brother who lives in the Citadel nursing home and other residents on Monday. The facility is the site of a large COVID-19 outbreak. 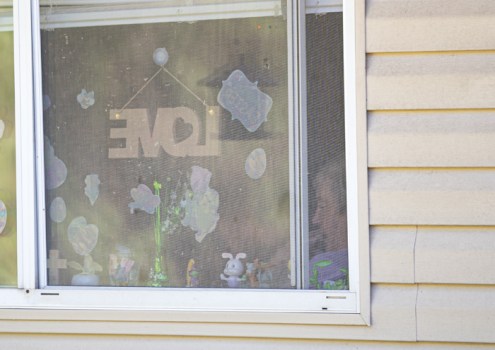 Josh Bergeron / Salisbury Post - A resident of the Citadel listens to music Monday performed by Pat ‘Mother Blues’ Cohen, who has a brother that lives in the nursing home.

SALISBURY — In a greenspace separating wings of the Citadel nursing home on Monday afternoon, Pat “Mother Blues” Cohen told all those within earshot to “lay back and listen.”

Cohen, whose blues singing has taken her to Europe, Australia, South America and New Orleans, set up her sound system and laptop on an air conditioning unit outside of her brother George’s residence. She started off the set by making sure Duke, as she calls her brother, was listening. She then began her concert, letting her rich voice carry across the spring afternoon.

She sang out “Alone in a room, it’s just me and you.” And residents nearby cracked open their windows and turned down their TVs.

Steve Dean, a resident at Citadel, called Cohen a blessing in a “blah time.”

Pat “Mother Blues” Cohen has a brother who lives in The Citadel in Salisbury and she’s set up outside his room to sing to him and other residents today. The nursing home is the site of a COVID-19 outbreak. pic.twitter.com/bDqwbVrssn

Cohen has been performing at nursing homes around Rowan County for years, but she generally sings inside the residences for an hour. At Compass in Spencer, she performs every week. The COVID-19 outbreak at the Citadel changed her usual routine. She continues her performances while practicing social distancing — where residents can remain in their rooms and hear her from their windows.

“I may not have cash money,” Cohen said. “My voice is my currency, so I give what I have. I think everyone should do that. Some people think they can’t give anything because they don’t have money, but you have something you can give. Just a small act of kindness.”

She does small acts of kindness, much-needed amid the COVID-19 pandemic, with her voice.

Cohen has received national attention for her singing, too. She was featured in a recently published Rolling Stone’s story “Meet the Blues Singer who won’t stop brightening seniors’ lives.” She was also interviewed CNN, which will air sometime this week.

Cohen also plans to return to the Citadel Wednesday at 1:30 p.m. and then perform at Compass at 3:30 p.m.

Cohen said she enjoys returning to the nursing homes to perform.

“It’s the gift that keeps on giving,” Cohen said. “It helps me learn different tunes. I can do anything.”

She sings jazz, blues, gospel and show tunes. The residents can listen, sing along or dance.

In March, the Sweet Potato Queens helped her. The women reached out to her to perform at their Mardi Gras Gala as they raised money for the Wallace Cancer Institution. Cohen wasn’t given compensation, but at the end of the gala a collection plate was passed around. Enough money was raised for her to buy a new PA system, a Bose S1, that is easy to carry and has a big sound.

Cohen said she was excited and “tickled” for the sound system that made it possible for her to perform during the pandemic.

Cohen lived in New Orleans for 13 years while performing there. She moved to Rowan County after being displaced by Hurricane Katrina in 2005. She currently lives in East Spencer.

Cohen gets some assistance from Hillsborough-based Music Maker Relief Foundation. She wants to get a second sound system and is soliciting donations through a Go Fund Me page: gofundme.com/f/b5hndq-senior-love.

It’s not about the money, though, for Cohen, who believes if you love what you do you’ll never work a day in your life. Many of her performances are done at no charge because the nursing homes can’t afford entertainment.

“It’s not about the money,” Cohen said. “It’s about helping the seniors out.”