SALISBURY — Another individual associated with the Citadel nursing home, which is the site of a COVID-19 outbreak, has died, bringing the total death count at the facility to 17, according the Rowan County Health Department.

The Citadel, located on Julian Road, is one of three congregate living facilities with a COVID-19 outbreak. It represents a majority of the county’s 22 deaths, with four others who were residents of the N.C. State Veterans Home and one who was not associated with a congregate living facility. The average age of deaths is 83, which is higher than the current average of positive cases at 57.67.

A total of 351 individuals have tested positive for COVID-19 in Rowan County after 2,262 tests have been conducted. Of the positive cases, 15 are currently hospitalized and 96 have recovered. Rowan County spokesperson TJ Brown, though, said there was good news Tuesday as a significant group of people were moved from the “follow-up” category to the “recovered” category.

As of Tuesday, 96 Rowan County residents who have tested positive for COVID-19 have recovered. 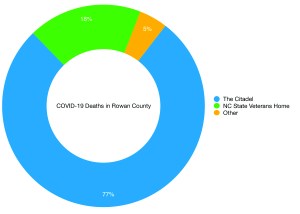 This chart shows a breakdown of COVID-19 deaths in Rowan County by their association. There have been 17 deaths at the Citadel, which represents a majority of the 22 that have occurred in the county. Click on the image for a larger view.

Rowan Public Health Department Director Nina Oliver said the state could see a second wave of the coronavirus in the fall, which will mean, “stretching hospitals to devastating levels” as the nation enters the flu season.

Oliver added that now is not the time to become complacent as pandemics typically come in waves.

“When it first hits, you see cases rising and hospitalizations rising and then it will fall,” Oliver said. “And when things start to fall, we loosen restrictions. We loosen guidelines. We loosen recommendations. Everyone is comfortable. We’re getting back to normal but the virus has not gone away.”

Oliver said the nation needs to keep in mind what occurred in 1918 — when the second wave of the Spanish Flu was deadlier than the first.

“The virus then now has the ability to do what a virus does, and it affects people again,” she said. “Once we get the second wave, you see infection rates going right back up.”

She told a group of community leaders Tuesday morning that she didn’t want to scare anyone, but hoped to provide information and urge residents to learn from history.

Oliver also said common symptoms for the COVID-19 — once denoted by a dry cough, sore throat, fever and difficulty breathing — now officially can include chills, repeated shaking with chills, muscle pain, headache, new loss of taste or smell as well as “new confusion and inability to arouse,” which refers to the inability to be awakened. The CDC recommends that anyone experiencing at least two of these symptoms should consult their doctor, or seek emergency help if experiencing trouble breathing, persistent pain or pressure in the chest, new confusion or inability to arouse and bluish lips or face.

Now that symptoms have expanded and there are more criteria, Oliver said she believes there will be an expansion in testing. She added that the county has enough tests available.

“We haven’t had people report not having access to tests,” she said. “I think it’s the testing criteria.”

Not everyone meets the criteria to be tested, she said. That’s why it’s encouraged to contact a physician to allow him or her to determine if the patient should be tested for COVID-19.

Also on Tuesday, state numbers remained higher, though only slightly, than the Rowan County Health Department.

Brown, as well as Rowan County Emergency Services Chief Chris Soliz, has attributed the discrepancies to a difference in how and when the county and state processes the data.

Brown said last week that while Rowan County is “putting eyes on individualized numbers to hand-crunch” the data for each case, the state uses an automated system to pull data. Therefore, Brown said, sometimes cases don’t have a phone number or address attached to the individual and may be wrongfully reported under Rowan County.

A state public information officer responded to a question about the data discrepancies by saying, “as data is inputted into (the NC Electronic Disease Surveillance System) and verified, there can be a difference in county numbers and state numbers at times.”

In other Rowan County COVID-19 statistics:

‘It made me feel very loved’: Social distancing parade…