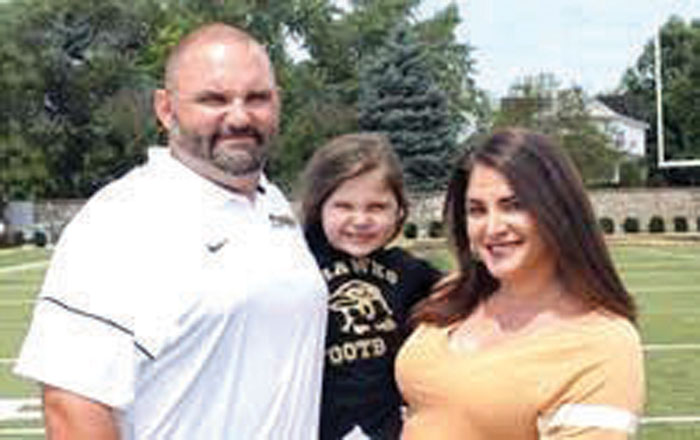 He hadn’t grown up dreaming about it or preparing for it, but life throws some curveballs.

“If someone had told me when I was a senior at Catawba that I’d be a college football coach in Illinois when I was 36, I would have told them they were crazy,” Bass said.

Bass was supposed to be an insurance man, but now he’s preparing to start his fourth season as head coach of the Division II Quincy University Hawks. It will be his ninth season at the scenic school on the Mississippi River.

“I ended up in the right profession,” Bass said. “Right now, I don’t think I could live without football. I really can’t see myself ever doing anything else.”

Bass went to high school in Marion — “Where Main Street Meets the Mountains” — is the town slogan. As you roll west on Interstate 40, you’ll encounter Marion between Morganton and Asheville, at the edge of the Blue Ridge Mountains. Bass was a modestly sized lineman at Marion’s McDowell County High, but he was such a good long snapper that Catawba became interested. Kevin Brown, the quarterbacks coach, landed Bass. He became part of Catawba’s recruiting class of 2001.

“The coolest memory for me was our playoff game with Central Arkansas,” Bass said.

Catawba trailed 31-20 at halftime, but it seemed like more than that because Central Arkansas scored 17 unanswered points to close the first half. Catawba, which had Luke Samples throwing passes to Nick Means and had Rodney Wallace carrying the ball, rallied to win, 35-34.

“Then we won the next week at (No. 1-ranked) Valdosta State in overtime before we lost in the semifinals at (No. 2) Grand Valley State,” Bass said. “But everyone in the program knew we could play with anyone in D-II.”

After that epic 2001 season, Bennett headed to Coastal Carolina to start the program there, but Bass’ role as the years rolled by became more important than anyone had anticipated when he first arrived at Catawba. He got a lot a bigger. His work in the weight room made him one of the team’s stronger players and he became a starting guard for head coach Chip Hester and offensive line coaches Mike Bloomgren and Ben Hepler.

“I got to play a lot of football for Catawba on really good teams,” Bass said.

The spring semester of 2006 was the turning point for Bass’s career choice. His football playing days were over. Graduation — and the real world — was looming. His father had lined up a secure and comfortable insurance job for him back in Marion.

“That was a semester without football,” Bass said. “But I was still living with Catawba football players, guys like (tight end) Shane Timmons, and they were going to spring practice, and I wasn’t. I couldn’t believe how much I missed it.”

He missed it enough that he volunteered to assist Hepler with the o-line.

And in the fall of 2006, instead of selling insurance, Bass was an assistant football coach for the McDowell County program.

“Brian is a great coach and a great leader and we worked to rebuild a program where they hadn’t been winning,” Bass said. “That last season I was at East (2009), we hosted a playoff game — and won it. I loved the years I spent at East Rowan.”

An opportunity to move into the college ranks came next, and it came when Bass least expected it — on the day before his wedding to Melaney Porter, a Catawba graduate who had been named the most improved member of the women’s swim team in 2009.

She’s from South Dakota and started college in Minnesota, but she transferred to Catawba to get out of the cold.

“I got a call literally a night before the wedding from Missouri Southern State in Joplin,” Bass said. “The day of our wedding, I’m talking to the head coach out there about driving out there. Then 17 hours of our honeymoon was spent making that drive to Joplin. That’s when I knew, for sure, I’d married the right girl. She understands how it is with me and football. It’s no joke, the wife gets tested a lot more than the coach. The most important thing for any football coach is to marry the right one. Melaney has sacrificed a lot for my career.”

Barrett is now the offensive coordinator and quarterbacks coach at Southeastern Louisiana.

Bass made the move to Quincy prior to the 2012 season to serve as the offensive line coach. In the years that followed, he was promoted to offensive coordinator, assistant head coach and strength & conditioning coach.

Quincy is almost identical in size to Catawba. While you think of Chicago first when you think of Illinois, the big city is five hours away, northeast of Quincy. St. Louis is two hours south.

Bass was on a recruiting trip to Florida in the spring of 2017 when Quincy’s AD called to offer him the head coaching job on an interim basis. Head coach Tom Pajic was leaving to be an assistant at Temple.

“It’s been a process, changing the culture,” Bass said. “Quincy had not traditionally had football success, but we’re working to change that.”

Quincy was considerably more competitive in 2018 and closed with a two-game winning streak to finish 4-7. Bass made staff changes after that season, which included the firing of offensive coordinator Khanis Hubbard, who had been Bass’ Catawba teammate.

In 2019, Quincy improved to 5-6, another small step in the right direction.

Time flies. This will be Bass’ ninth football season at Quincy.

He had been looking forward to spring drills and Quincy’s spring game. His parents were coming from North Carolina to visit, but then the COVID-19 pandemic canceled all activities.

Like all college coaches, Bass is home now a lot more with his wife and family. There are two children. Lyla is a sassy 6-year-old, while Jackson is 15 months old. Jackson sleeps a lot.

Bass and his staff closely monitors his players’ progress with their online classes. He’s done about all that he can as far as recruiting. Offers have been sent out. A plan for what everyone hopes will be a “normal fall football season” are in place.

Team meetings are conducted on Zoom every Friday. Bass stresses high character when no one is looking and each individual doing his part during a national health crisis.

“The core values I stress now are the same ones instilled in me at Catawba by my coaches,” Bass said. “Faith, family and football. I still try to do right by that. My wife (an assistant swim coach at Quincy) and I really enjoy having players over to the house. That gives them an opportunity to see me not just as a football coach, but as father and husband. That’s important. I want them to be good football players, but what they’re doing 30 years from now is even more important.”

He stays in touch with Hinson and many of his former teammates. The news that Catawba’s grass football field is being replaced by turf makes economic sense, but the news saddened Bass.

“I understand field costs, but I loved that grass,” Bass said.

Bass’ next trip home will likely be Christmas.

He made it to Salisbury last December. He attended the Dale’s Sporting Goods Sam Moir Christmas Classic at Goodman Gym. He was trying to recruit a couple of Salisbury High players for Quincy. He wasn’t successful, but that won’t stop him from trying again in the future.

Salisbury and Catawba always will be important to Bass and his wife. They were married at Omwake-Dearborn Chapel on the Catawba campus.

“Great school, great town,” Bass said. “We’re a long way from home, but Catawba always will have a special place in our hearts.”