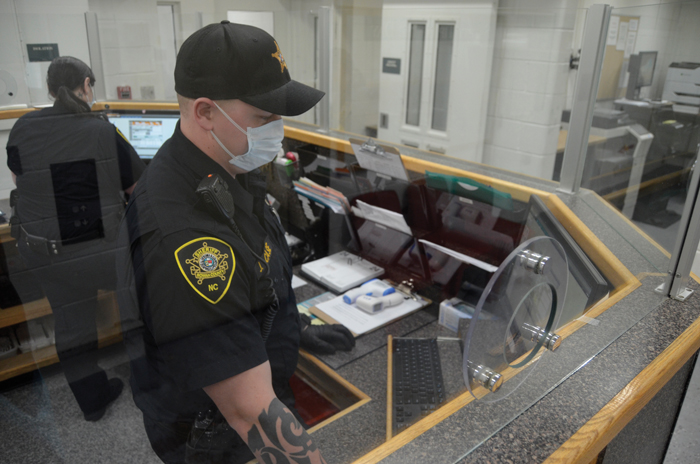 SALISBURY — In January, Rowan County Sheriff Kevin Auten was looking for places to house 30 inmates from a jail that was overcrowded. Now, amid the coronavirus outbreak, the jail population has dipped to numbers not seen in nearly two decades.

In February, Auten told the Post he had 402 inmates in a jail that had bed space for 368. As of Thursday morning, there were 233 inmates in the Rowan County jail and, of those, 26 were housed because of a backlog waiting on beds with the N.C. Department of Corrections. Nine inmates are part of the state misdemeanant confinement program.

“So 35 of my prisoners belong to the state. So our jail population without those would be 198,” Auten said.

The last time the Rowan County Detention Center had fewer than 200 inmates was in 2001, when there were 178 individuals. That was followed by 206 the next year.

Auten added he thinks COVID-19, which has produced hundreds of cases and 20 deaths in Rowan County, has caused the whole system to do things differently. Other sheriff’s are seeing similar trends in their jail population, too.

The state court system was closed by Chief Justice Cheri Beasley a month ago, with a postponement earlier this month until June 1. But Beasley’s order included several directives that allows certain court proceedings to continue.

One of those proceedings includes looking at inmates who are in custody. Auten said, while those cases typically may not have been at the forefront of the trial calendar, they are now because of court system restrictions to reduce the spread of COVID-19.

“It is vital during this unprecedented time, that we continue to work together with our local law enforcement, clerk’s office, judge’s office, attorneys, court counselors and probation officers to balance the health and safety of every person and the rights of the accused as well as the rights of the victims of the crimes,” said Rowan District Attorney Brandy Cook.

Cook said when Justice Beasley’s order was extended the district attorney’s office began employing a variety of procedures to address pending criminal offenses and public health of those who were already in custody. Those procedures included:

• Identifying appropriate criminal cases that can be resolved on an earlier court date.

• Continuing to address jail cases in both district and superior court regularly by having inmates appear remotely with additional safeguards put in place for all necessary courtroom personnel.

Resident Superior Court Judge Anna Mills Wagoner added that defendants who want to plead guilty or resolve probation violations are added onto the criminal docket by request of the defendant or their attorney.

Wagoner said since Justice Beasley’s order, which curtails in-person appearances in the courtroom, Rowan has disposed of a number of jail cases.

“I also regularly review conditions of release to determine if modifications are necessary,” Wagoner said. “All of us in the criminal justice system in Rowan County communicate and cooperate with one another as often as needed. I believe the frequent communication helps to alleviate any potential jail overcrowding issues during these trying times.”

Citations instead of arrests

But there are other reasons for the decrease in the jail population, too, says Auten. He made an appeal in March to law enforcement agencies within the county that citations be written for lesser or nonviolent crimes when possible instead of arrests.

“We had asked all agencies to use citations a couple weeks ago due to the overcrowding in the jail. We encourage them to continue to do that to help with the population as well as the health issue at hand,” Auten said at the time.

Additionally, the probation system is also looking at not issuing violations for low-level offenses, Auten said. This means that individuals who have not paid a fine or have missed a probation meeting may not receive violation and, thus, be booked into the county jail.

“Everybody in the judicial system is doing their part to help. I think there are some people who have also gotten family members out,” Auten said. “The coronavirus caused us all to think differently.”

Once court resumes full operations, Auten admits, jail numbers may increase again, but he’s hopeful some of the initiatives implemented now will allow the court system to continue to keep the numbers low.

Since March, the N.C. Department of Public Safety, which includes adult corrections, has also implemented a number of measures to prevent transmission of coronavirus. The measure that directly affects county jails was put into place on April 7 and created a two-week moratorium on accepting offenders from county jails. Last week, the moratorium was extended until May 3.

That means 26 of the inmates Auten said belonged to the state will remain in the county jail. The decision by the state to suspend transfers was one that was supported by the North Carolina Sheriffs’ Association.

“The less prisoner movement the better off we all are,” Auten said.

Auten said he understands the state’s hesitancy to take prisoners at this time. This week, the first coronavirus-related death of an individual at a state prison occurred at Pender Correctional Institution. The offender, who was in his late 50s, had underlying health conditions.

The offender exhibited symptoms of a viral infection on April 8, was isolated from the population and was tested for COVID-19 with a return of positive results on April 10. The inmate was hospitalized, but his condition worsened. He died at the hospital on April 21.

One concern during the pandemic has been whether to release county inmates to reduce the number of offenders in the jail. Hundreds of offenders are being considered statewide, according to Todd Ishee, commissioner of prisons.

The state prison system began looking at, where appropriate, reducing the maximum sentence for offenders who are nearing their release date and allowing them to be released to the community upon completion of the minimum sentence.

Offenders, though, cannot have been convicted of a violent crime against a person and must be one of the following:

• already on home leave with a release date in 2020

• Already on work release with a projected release date this year.

Auten said the sheriff’s office has looked at 35 inmates in the county jail to see if there was a chance of early release based on the state criteria, but none qualified.

Auten said a lower number of inmates in the county jail allows staff a chance to further deep clean the facility. One quad at the annex is closed for maintenance, he noted.

“It’s been a good time to get more things done because before we were busting at the seams — a few people were sleeping on the floor at one time. It’s hard to do anything progressive when you’re just barely maintaining at that point,” he said.

Auten said, in general, he also believes that crime is down, notwithstanding domestic violence cases. He said property crimes have also decreased, with some vandalism taking place here and there.

There’s no indication at this time what the jail population will look like after the outbreak subsides. However, Auten said he expects it to increase.

“I don’t know how fast the judicial system can react because they are just going to be swamped,” Auten said.

There’s not been any court for traffic tickets since March.

“Everything is going to be behind,” Auten said.