Pearson ready to take the reins of North Rowan football 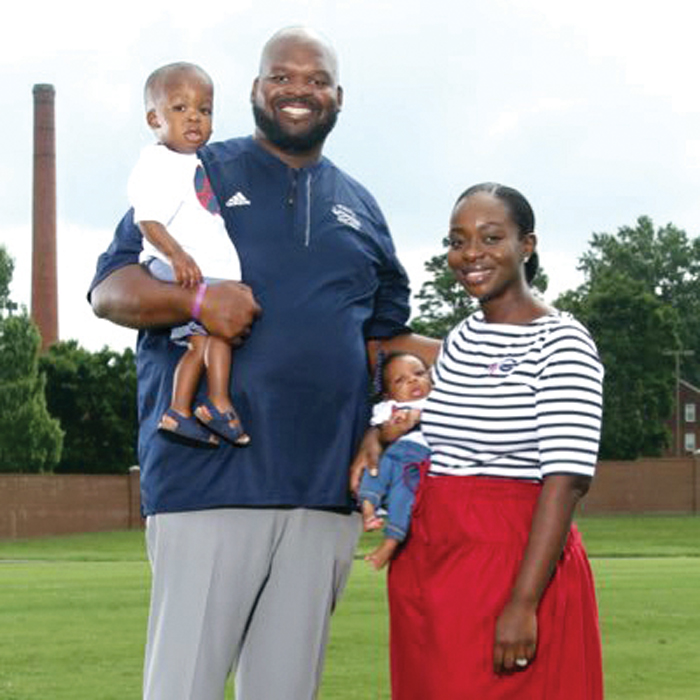 Nygel Pearson and his wife, Majoria, with their children Grayson and Addison.

“I do understand that not every player at North Rowan is like Hargrave,” Pearson said with a deep laugh. “What I remember about Hargrave is that sometimes we’d have to take him out of scrimmages, so our offense could get some work in.”

It’s a big, merry laugh — Santa Claus after a gallon of milk and a plate of cookies laugh.

But Pearson is serious about football. He was a terrific player in high school and college and an offensive lineman who could smile in the locker room but then get suitably nasty between the lines. He was a good student, too, and holds a master’s degree.

“North Rowan High School is honored and very excited to have Coach Pearson join our staff this fall,” said Principal Meredith Williams. “Our students will benefit greatly under his mentorship and guidance in discovering their ‘True North,’ both on and off the field.”

Pearson came to Rowan County in 2017 when he was hired as Catawba College’s offensive line coach by Curtis Walker. He was the replacement for Brian Hinson, who had taken the head coaching job at Salisbury High, North’s biggest rival.

Pearson has done a fine job at Catawba, despite having to deal with an unusual amount of injuries to that position group.

The biggest attraction to him as far as seeking a high school job was stability. College assistant coaching is a pretty itinerant life — with some crazy hours because of recruiting and film study. If the program does well, you move up, change schools and uproot your family. If the program does poorly, you’re most likely looking for a new job and also uprooting your family.

But Pearson might be the coach at North Rowan for a long time. His wife, Majoria, is an elementary school assistant principal locally and likes her job. Their children — son Grayson and daughter Addison — are very young.

“My wife and I love living in Salisbury and when I heard about Ben (Hampton) leaving North Rowan, I got interested,” Pearson said. “Stability really is the biggest thing. There’s more stability in high school. My son is 3 and my daughter is 2, and this is a good place to raise a family. You want your kids to be able to say they grew up somewhere. We want that place to be here.”

It’s hard to find any positives in the year of COVID-19, but Pearson tried.

North Rowan graduates, linebacker Eric Gibson and defensive lineman Steven Thurston, have been an important part of Catawba’s team, so Pearson knows the type of players and people North produces.

North played in the 3A state championship game in 1992 under coach Roger Secreast and also has been guided by famed coaches such as Burt Barger, Larry Thomason and Joe Nixon. Ben Hampton, who vacated the North job to take the reins at Socastee High in South Carolina, won more than his share of games at North. He went 42-21 in five seasons while having a positive impact on the community and the school.

North is a small school now, 1A, but it still has good athletes who are willing to work and sacrifice in the offseason to maintain that fine football tradition.

Pearson will be North’s 10th head coach. He’ll be the first black head coach for North’s football program. There have been no black head football coaches at any of the Rowan County schools since 1997.

Pearson grew up in Darlington, South Carolina. He graduated in 2004 from Mayo High School for Math, Science and Technology. He made all-region and all-state teams and played in South Carolina’s North-South All-Star Game. He was a stout enough player to be offered a spot on the team by the University of Central Florida. He was a sharp enough student to be offered by Princeton.

But he wanted to stick close to his family and girlfriend, so he headed 90 minutes south to Orangeburg to play football for South Carolina State.

At his peak at South Carolina State, Pearson was 6-foot-6, 305-pounds. He made second team All-Mid-Eastern Athletic Conference as a senior in 2008. He was MEAC Offensive Lineman of the Week for a bulldozer performance against Howard University. He also was the team’s top student and a finalist for prestigious national awards.

The academic side was a priority for Pearson, as both of his parents were teachers. His brother, Nicholas, is now the principal at Sumter High in South Carolina.

Pearson’s first job out of college was as an elementary school physical education teacher, chasing youngsters around.

“Baptism by fire,” Pearson said with a chuckle.

Pearson entered high school coaching and teaching as offensive coordinator and offensive line coach at Fairfield Central High in Winnsboro, South Carolina north of Columbia. The Fairfield Central Griffins were good, but they ran into South Pointe and Jadeveon Clowney in the semifinals of the 2010 state playoffs. Just two minutes into the game, the score was 22-0. Fairfield was down 43-0 after a 53-yard interception return by Clowney — and it was still the first quarter.

Clowney probably helped Pearson make the decision to switch to college coaching. He returned to South Carolina State as an assistant. He coached tight ends first, fullbacks and then the offensive line. He got married in 2013 and finished work on his masters in secondary education in 2014. The second half of the 2015 season, he served as S.C. State’s offensive coordinator.

Catawba’s Walker had been an assistant coach at Coastal Carolina when Pearson was in high school and had tried to recruit him. They’d known each other and trusted each other a long time, so Pearson made the move to Salisbury when Walker offered the chance to be the run game coordinator as well as offensive line coach.

“When you play and coach at one place as many years as I did, sometimes you need to change your stripes and experience something new,” Pearson said.

Now, Pearson makes the move over to North Rowan, which went 9-4 last season and won a second-round playoff game.

“The hardest part is leaving those offensive linemen at Catawba,” Pearson said. “Some of them were just babies when I came in, but they’ve grown up over the last three years.”

As far as his North staff, Pearson will get to work on that. There is expected to be significant turnover from last season. Pearson said Athletic Director Mark Woody, who has football head coaching experience, has been helpful as he makes the transition.

“We’ve got spots to fill,” said Pearson, who will assume the physical education teacher job vacated by Hampton in August. “Hopefully, we can fill most of them from inside the building.”

Pearson said his house has started to undergo quick redecorating — with a green and gold theme.

“I’m excited about being the leader of a program like the one that has been built at North Rowan,” Pearson said. “I would like to thank the leadership at North for entrusting me with being the head football coach. My family and I are looking forward to being a part of the community.”

High school tennis: South could have made some noise