High school tennis: Salisbury had a chance for another CCC title 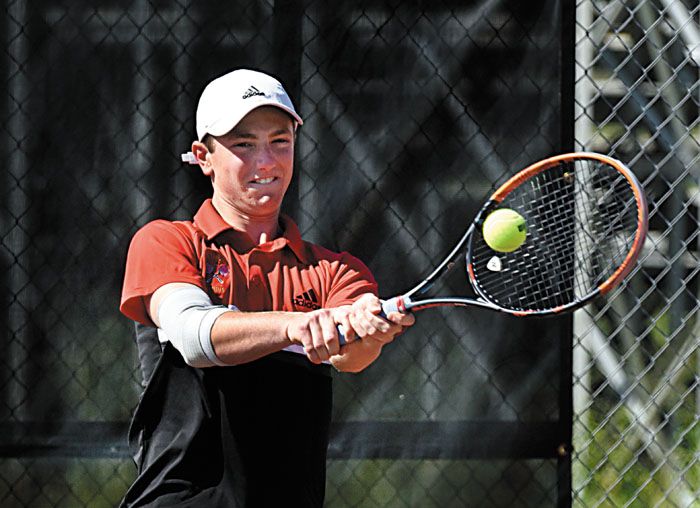 Salisbury's Sean Archer returns the ball in a match last year. photo by Wayne Hinshaw, for the Salisbury Post

Even missing four of the top six from 2019 when Salisbury came awfully close to winning the 2A state championship, the Hornets might have ruled again, at least in the CCC. That’s something we’ll never know. COVID-19 wrecked the 2020 season.

Salisbury tennis has tradition. It rolls on and on and on. One group leaves. There’s another one steps in.

“This was a rebuilding year for us, but we had very good players who just hadn’t had their time to shine yet,” Salisbury coach Milt Griffith said. “We had some kids who weren’t in the top six last year, but that was only because we were so strong last year. I know we had a good team. Our match with Ledford probably would have decided the conference championship.”

The Hornets were 4-0 when play was halted. That included three CCC wins and a 9-0 non-conference victory over West Rowan.

The Hornets had three seniors. The careers are over for No. 1 singles player Sean Archer, No. 2 Juan Salazar and No. 4 Parker Chmiel.

Archer played No. 3 most of the time in 2019 and provided an automatic win. He also prevailed consistently when he played No. 2.

“Sean could’ve played 1 or 2 for us last year — he’s that good,” Griffith said. “He was off to a really consistent start this season, dedicated and focused and playing the best he’s ever played. I think he would’ve been player of the year in our conference.”

Salazar had bumped up from playing No. 6 as a junior to No. 2 as a senior. He had the toughest matches in the early going, although there’s no doubt he would’ve won most of the time.

“Going from 6 to 2 was a very big move for him,” Griffith said. “But Juan would’ve done what he needed to do.”

Sophomore Will Koontz wasn’t in the top six last season, but he’d been holding down the No. 3 spot with no problem.

“Will would’ve been a very solid No.3 for us,” Griffith said. “He’d really improved.”

Junior Merritt Mason and sophomore Bennett Clark were new faces as the bottom two seeds, but Griffith believes they would’ve more than held their own. Mason had started 4-0, while Clark was 3-0.

“That’s one of the things I was really looking forward to — watching those two improve,” Griffith said. “They didn’t have a lot of experience on the court.”

Griffith said his guys kept playing throughout March and April, even after the matches stopped.

He saw some of his players recently when front-yard senior signs were delivered.

“It was good to see some smiles on their faces,” Griffith said. “These are very different times.”

Griffith coaches the Salisbury girls tennis team in the fall, and he’s concerned about fall sports. Not just tennis, but football, which is the lifeblood of high school athletic programs.

“I’m trying to be hopeful, but no one really knows,” Griffith said. “We just don’t know right now.”