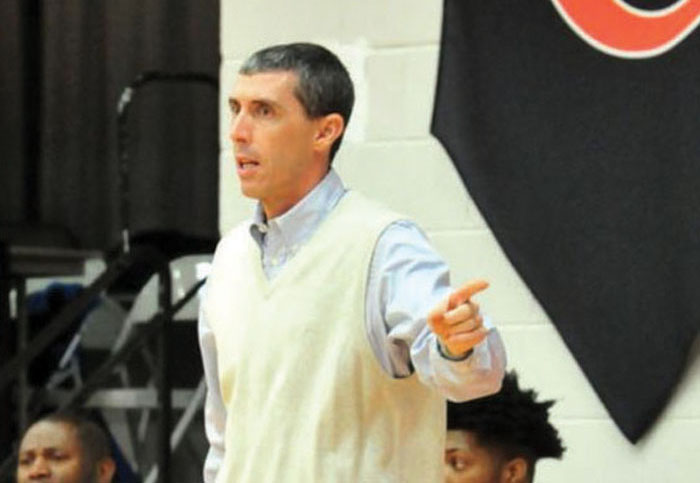 KANNAPOLIS —  Andy Poplin is trying something he never dreamed he’d be doing in these strange times.

“I’d never played before,” Poplin said. “Can’t hit it straight to save my life, but I’m enjoying it. I’ve played 10 times in the last two weeks. I’m getting some fresh air, at least.”

Poplin, 49, also will be doing something else no one dreamed he’d ever do. He’ll be coaching A.L. Brown’s basketball team in the 2020-21 season.

What makes that more than a little unusual is that Poplin grew up in Concord and graduated from Concord High. He also coached the Concord Spiders to their only boys basketball state title in 2007.

Concord and A.L. Brown are rivals. That’s putting it mildly.

“I guess it’s on a little bit lower scale,” Poplin said. “But Concord and A.L. Brown are like Duke and Carolina.”

A.L. Brown was the enemy for Poplin when he was Concord’s head coach from 2003-04 to 2006-07. Poplin came out on top in his last six battles with coach Shelwyn Klutz, who announced he was stepping down from the Wonders’ coaching position in February after 23 seasons and 302 wins. Klutz is retiring in August. Poplin will take over his P.E. job.

“Looking at A.L. Brown from a distance, I always thought it would be a good place to coach,” Poplin said. “There’s a lot of tradition, a tradition of excellence. I’ve been to the football games there, and when their guys come running down that hill through the smoke, that’s about as exciting a thing as I’ve ever seen in my life. They’ve had good basketball teams. They’ve played in big basketball games. Shelwyn did a great job with the program, won a lot of games for a long time.”

Poplin has quite a coaching resumé. He coached Chris Paul, when the point guard was a youngster, and he’s coached Paul’s 17-under showcase team, the CP3 All-Stars.

Poplin is an interesting guy. He has a collection of notable basketball shoes. He may be the only basketball coach who likes country music.

He was born in Charlotte. His family moved to Concord when he was 2. He graduated from high school in 1989.

He was mostly a baseball player in high school. He played four years of baseball, but his basketball career ended after two jayvee seasons. Concord was loaded with athletes and coach Bo Brickels had terrific teams during his tenure from 1986-94. Brickels was the biggest influence on Poplin’s coaching career. Brickels’ style was uptempo and aggressive.

“I loved to watch Coach Brickels’ teams play, and that’s when I knew I wanted to coach,” Poplin said. “When I was 16, I was coaching a team at the Boys Club in Concord. It looks like we’re going to be the worst team ever, but then a kid named Kareem Chapman walks in and they put him on our team. He was the best player in the league and we won it. They gave me a trophy that said ‘Coach of the Year.’ It was about 3 inches high, but I was hooked. I thought I was hot stuff.”

He went to Lenoir-Rhyne, graduated in 1993 and was eager to coach.

He got started as an assistant coach at College Park Junior High in Hickory (1989-92). The next year, he was a varsity assistant at West Caldwell High in Lenoir.

He got his big break when he was 23. Mount Pleasant hired him as its head coach. That brought Poplin back to Cabarrus County, but it was a tough assignment. When he was hired, Mount Pleasant was fighting uphill in a monstrous 2A league that included West Rowan, North Rowan, Salisbury, Albemarle, North Stanly, West Stanly and West Montgomery. Poplin went to work and his teams got better. He coached the Tigers from 1994-2003. That’s when he got his shot at Concord.

With athletes such as Dee Bost and Lance Lewis, Concord was 25-6 and reached the 3A state championship game in 2006 (a four-point loss to Dudley). The Spiders (27-4) beat Kinston for the title in 2007.

Poplin resigned after that state title year, following a ruling by the NCHSAA that Concord had violated out-of-season workout rules.

Poplin was out of high school coaching for several years. He taught elementary school P.E.

“I had my camps and my clinics and was doing personal training,” Poplin said. “I was busy and happy and I didn’t really plan to coach again. But one of the kids I worked with was Parker Hart. His dad was Walter Hart, the superintendent of the Hickory schools. That led to me applying for the job at Hickory High.”

Poplin was hired by Hickory, a traditional power, and was back in the game. His first Hickory team started 0-9, but finished with a winning record.

He went 158-40 with the Tornadoes. In seven seasons, there were two league championships and three second-place finishes. His last six teams won 20 or more.

“We had good teams,” Poplin said. “But we had our troubles in Cabarrus County. Lavar Batts (and Robinson) knocked us out once. Wendell Moore (and Cox Mill) got us, too.”

Now he’s coming back to Cabarrus County again. His parents are in their 70s. Getting closer to them is also part of the reason A.L. Brown makes a lot of sense for Poplin.

“My parents — that’s definitely part of the pull,” Poplin said.

Energy and passion have been Poplin’s trademarks, as he’s piled up a tremendous record as far as wins and losses. Hickory-based Chris Hobbs (of the Hobbs Daily Report) listed Poplin’s career mark at 358-80. Hobbs says that’s unofficial, but you can count on it being very close.

As the years have gone by, Poplin has become more involved with the challenges his players face off the court.

“As a basketball coach, you’ve got a platform and an opportunity to hold guys accountable,” Poplin said. “This is about more than a game. I want to serve our players’ hearts and not just their talent. I want our players to grow and be better men because of their experience in our program. We want to build a culture of excellence. My vision, is to build character and set each player up for success beyond A.L. Brown.”

He wants the Wonders to play fast, although that will depend on personnel.

“I like to play fast and press and run around a little bit, but you fit your system to the guys you have,” Poplin said.

A.L. Brown won five boys basketball championships in the old Western North Carolina High School Activities Association (1952, 1954, 1957, 1967, 1968), but hasn’t won one since joining the NCHSAA. The Wonders were runner-up in 1983 when Klutz was playing.

Klutz coached a lot of good teams, a lot of runner-up teams, but only one conference champion in 23 years. In boys basketball, the Wonders generally have been in the shadow of a more powerful neighbor — whether it was West Rowan, Concord, Robinson or Cox Mill.

“I’m going to go in there and put my spin on it and plug away,” Poplin said. “This is a brand new book for our student-athletes, the pages are blank, and we’re the authors. We’ll put our own words on them one day at a time.”

Ralph and Elizabeth: Kitleys are a basketball family

High school tennis: Salisbury had a chance for another…