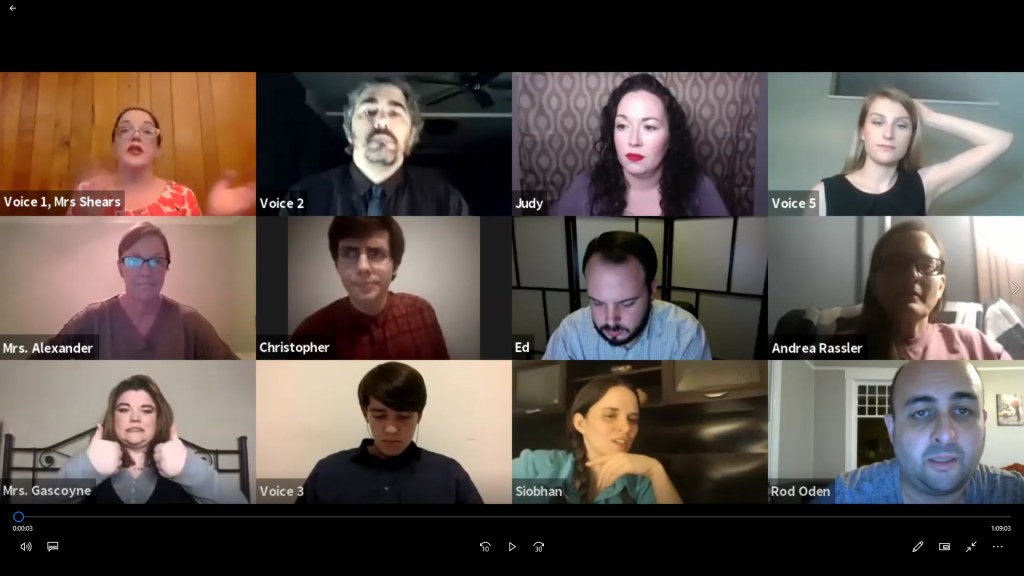 Rod Oden, the executive director of Lee Street Theatre, with cast of "The Curious Incident of the Dog in the Night-time" as they rehearse via ZOOM for Saturday's performance.

SALISBURY — Lee Street theatre’s executive director and the crew that makes its shows possible have adapted after learning performances could not go on in front of a live audience.

Initially, Executive Director, Rod Oden said, that adaptation involved the cast and crew performing in the black box theater and recording for a live stream. Then, the governor announced no gatherings of 10 or more people.

Oden began thinking, “Is there any way we can do this from the comfort of our own homes?”

Actors would have to learn aspects of a production like broadcasting software and have lines tele-prompted, so it would look like they were interacting with other characters.

Its first online-only show was April 4, when Lee Street theatre unveiled “The Importance of Being Earnest” online. 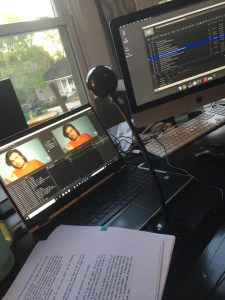 Rod Oden, the Lee Street theatre executive director, runs technical rehearsal and livestreaming test for “The Importance of Being Earnest.”

Oden admitted that first show was a stretch for the production crew. He had to go back to his roots of what he had learned about broadcast editing and camera angles.

Lee Street theatre has continued performances Saturday at 7 p.m., including an improv, a concert and this weekend’s “The Curious Incident of the Dog in the Night-time,” a Tony Award-winning play about a teenager with autism. The production was an important one for the board of directors.

“It’s been an enjoyable challenge,” Oden said. “I do think frankly that we’ve done a lot of good work for a theater that was doing live theater that had to transition into film performance.”

Homes are transformed to be sets, props are created and costumes are made. Oden said that collaboration and compromise have helped make the shows successful.

“The most important thing we do in theater is tell stories,” Oden said. “What it’s made us do is start and go, ‘How can I do that without all of the stuff I did before?’ We’ve come back to a lot of our roots. A lot of what was important in theater. It’s really translating.”

As actress Diane Draper plays Siobhan, a teacher, she transformed her room into a classroom, Oden said.

Maxwell Greger plays five roles in this weekend’s show, including a police officer and a reverend. Greger has a different costume for each and has to turn off the camera and mic to change. Then, he turns it all back on again in an instant.

“I’m really proud of them stepping up in this formatting and getting used to that,” Oden said.

The performances can be viewed online through Lee Street theatre’s live Facebook event, the website at leestreet.org or one of two streaming apps via ROKU or Amazon FireTV. The performances are free to view, but the audience can make a donation. On Facebook Live, Oden said, people treat it as a watch party. Viewers can comment and he can respond immediately. One production brought 600 people in to watch for two and a half hours, across 16 states and in the U.K.

One actress said her father who isn’t able to see her perform typically can now tune in to watch.

“I have reached out to a community that was one size,” Oden said. “It has grown exponentially by doing this. Those individuals reached back out to us to sharpen us, to challenge us, so that the next thing we do is just as rewarding as what we just did.”

Ahead of the performances, the “lobby” opens at 6:30 p.m. Lee Street Theatre shows information about the show, advertises for donations and promotes other businesses. There is also an intermission.

“I want to give them as much as theatrical experience I humanly can from the comfort of their home,” Oden said.

Since starting this, Oden said, his appreciation for the theater has grown.

“The next time we all step foot into a theater, we’re all going to appreciate it in a manner that we’ve never done,” Oden said. “That’s the truth. I miss my theater every single day sitting at home. The next time I set foot with a cast doing a show, it’s going to be one of the most amazing experiences because it’s been so long since we’ve come together for a live event.”

In the COVID-19 outbreak, Oden said the theater has upheld its social responsibility while trying to remain relevant.

Simon Stephens’ “The Curious Incident of the Dog in the Night-time” airs at 7 p.m. tonight. There are mature themes and language in the performance.

Salisbury Police: No criminal neglect at the Citadel