Pops at the Post will be a virtual program this year 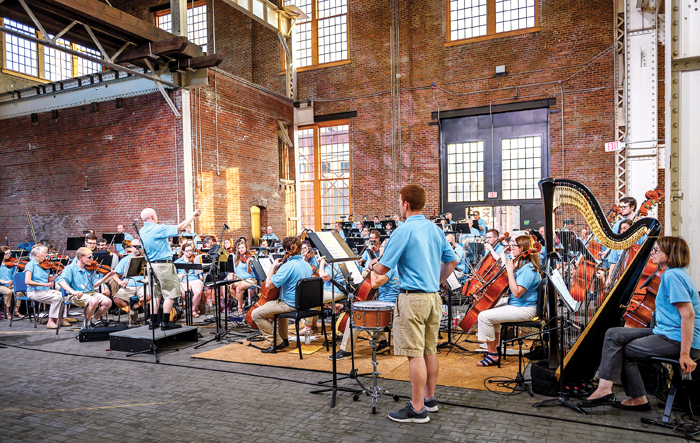 SALISBURY – Pops at the Post, a long-running tradition bringing together the Salisbury Symphony for a free outdoor show in downtown, will be a virtual program this year.

The program will involve pieces from programs in recent years in lieu of the normal concert. That’s due in large part to COVID-19 pandemic putting a halt to public gatherings. Organizers say it is unlikely limits would be lifted entirely by the planned June 6 concert date. For a second straight year, the event would have taken place at the N.C. Transportation Museum this year instead of at the Salisbury Post because of construction on Bell Tower Green Park.

This year’s virtual program will be streamed online one time only and can be viewed on Hotwire’s local channel for customers.

Joe Morris, Pops at the Post board chair, said the board approached a very difficult circumstance in wanting to continue a local cultural event and recognize the musicians who have stood by the program through the years. All musicians who will be featured in the program will be paid, though the payment will be a smaller fee than what they would normally receive for performing at the event.

“When we talked to our sponsors, they were wholeheartedly in favor of it,” said Salisbury Symphony Executive Director Bill Bucher. “We have no idea how many people are going to watch this and we hope this becomes a big deal because for a month now people have been dealing with being cooped up in their homes.”

The footage used was captured incidentally. Mike Miller, of local marketing agency Miller Davis and a Pops board member, takes on multimedia for the program every year with large screens and camera work. One of the cameras had to be set to record to transmit images, and Miller happened to have those recordings when COVID-19 began to cast uncertainty over the show.

With the amount of recordings saved and stored at the firm, it was surprising to find one from previous Pops at the Post shows, he said.

“We probably shoot, in the course of a year, 150 videos,” Miller said. “It goes from one project to the next for me. I was pleasantly surprised I still had them.”

Conductor David Hagy is creating the program and will be including the usual John Phillip Sousa marches, “America the Beautiful” and “Star Spangled Banner.” Hagy is leaving out Tchaikovsky’s “1812 Overture,” saying the piece is better enjoyed live outdoors with cannons and bell towers.

Hagy plans to include Leonard Bernstein’s “Candide Overture,” a pair of brassy pieces,  and “Nimrod” from Edward Elgar’s “Enigma Variations.” He also plans some selections from “Back to the Future,” which he noted was an appropriate play on wanting to return to normal in the wake of the pandemic, and a past rendition of “Hello Dolly” in honor of Jerry Herman, who died in December,

Hagy said three pieces are still up in the air for copyright approval and he will adjust the program if they are not approved. The program will last an hour, with 50 minutes of music rather than the usual two-hour event. The extra 10 minutes without music will be for some applause and introductions by Hagy.