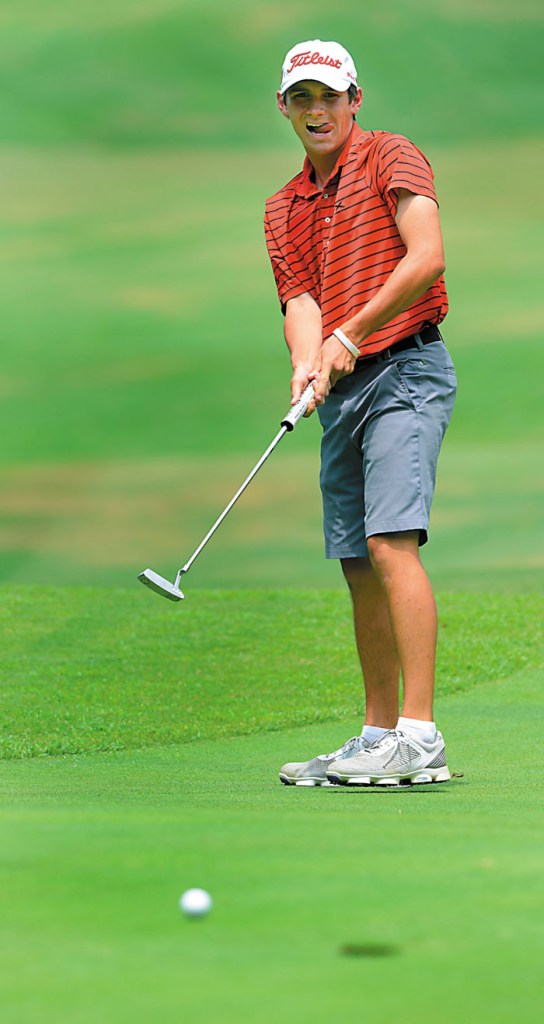 Michael Childress putts on the 10th in the Rowan Masters Golf Tournament finals at the Warrior Course on June 26, 2016. Photo by Wayne Hinshaw, for the Salisbury Post

SALISBURY — In a standard match play tournament at the Country Club of Salisbury, even in a seasoned, savvy field, Richmond University sophomore Michael Childress would be the prohibitive favorite to cruise to victory.

But this is a handicap tournament, so Childress has his work cut out for him. He’s giving up strokes, sometimes a truckload of strokes, to everyone he plays.

But he welcomes this format, a leveling of the playing field made by tournament director Chad Campbell, the head golf professional.

Everyone was a threat when this tournament started. With the aid of a handicap, guys who play bogey golf are 50/50 to beat a stellar player such as Childress, who hasn’t peaked yet, but is as consistent as the sunrise.

Basically, this is golf with a football point spread. The entry fee ($25) was modest and the prizes for winners will be as well. This is about competition — and fun.

“My dad (Jeff) played in the Rowan Masters last summer and he lost 8 and 7 in the first round,” Childress said. “But when you bring handicaps into play, the competition aspect becomes totally different. I’ve played against my dad a lot lately. With a handicap, he wins half the time.”

Childress is a Salisbury native who competed at Concord’s Cannon School in high school. He was All-State and played on state-title winning teams in 2015 and 2016. He also did good things in Salisbury off the course, like raising $12,000 for Rowan Helping Ministries.

As a freshman, he played in all eight events for the Richmond Spiders and had a stroke average just under 75.

“I averaged 71 last summer, so I haven’t played as well as I can so far in my college events,” Childress said. “But I did play some pretty good golf in the fall, and I was getting a solid grasp on the academic side of things, learning to manage my time better.”

In a sophomore year that was abruptly halted, he led Richmond with a 74 stroke average and posted five under-par rounds. In fall competition, Childress enjoyed his first top-10 college finish in windy conditions in New York. In late October, he shot a first-round 69 and stayed in contention for two rounds in Alabama, before settling for a tie for 16th.

His spring college season was limited to just one event. He shot 70-76-72 in that one. COVID-19 silenced all collegiate sports in mid-March. Childress and his teammates were sent home to continue their educations online.

“You take something for granted, but then it’s suddenly gone,” Childress said. “This has helped me appreciate everything that I’ve got, to be appreciative of all the people that help us get on a course for a college tournament. I miss my teammates. What I wouldn’t give right now to be playing with those nine guys. Even if it was 40 degrees and raining, I’d be happy about it if I could play one more round with my teammates.”

Childress, who placed fifth in the 2019 North Carolina Amateur, became a rising star in Rowan County golf back in 2014 when he and veteran Charlie Graeber captured the prestigious Labor Day Four-Ball Tournament at the Country Club. Childress was very young, had just started his freshman year at Cannon School when he became a surprise champion. Graeber also had been a winner in that event in 1995 — years before Childress was born.

Graeber also was Childress’ coach on the middle school team at Sacred Heart for two years, so they go way back.

Childress has played frequently at the Country Club of Salisbury during the last month. Now this ongoing handicap match play tournament has given him something to get hyped about, something to focus on.

“I do love golf, but I love competition even more than golf,” Childress said. “I’ve missed that feeling, and this tournament is providing great competition. I’ve had to be at my best to have a chance.”

There’s an alternate division, but the main draw in this tournament is 32 players, ranging in skill from above average to outstanding. They were placed in four flights of eight, based on their playing handicaps.

Playing handicaps are a little more complicated than stroke averages. Adjustments are made for course rating (a number indicating what a scratch golfer should shoot at the Country Club). The Country Club’s course rating is 71.6. There’s also course slope (the number indicating the difficulty of a course for a bogey golfer). Standard course slope is 113. The Country Club’s is 129, so it’s considered a serious challenge for a basic bogey golfer, someone who would shoot 90 on an average course.

Childress was matched up with Jenson in the first round. Based on their respective handicaps, Childress spotted Jenson a scary eight shots in match play, which means that on each of the eight holes rated the hardest at the Country Club — No. 5 is rated toughest of all — Jenson would get to subtract a stroke.

“Chace is a good player, so I went into that match thinking I was probably going to shoot something like a 66 to win,” Childress said. “I had a round of 62, the best round I’ve ever shot at the Country Club.”

Obviously, the adrenaline was flowing.

That victory got Childress into a First Flight semifinal against Henderlite. Childress was giving up five shots to one of the veteran masters of golf in the county, but he was able to survive with a narrow victory.

Now in the First Flight final tomorrow (Friday) afternoon, Childress will tackle his mentor — Graeber. It’s going to be tough for the college kid, as he’s going to be giving up nine strokes to Graeber.

The winners of the Second, Third and Fourth Flights also will be advancing to the tournament semifinals, along with the Childress/Graeber winner. In a handicap tournament, they’re all on equal footing. The Fourth Flight survivor might beat Childress or Graeber.

“I’ve looked at it,” Childress said. “If I did end up playing against someone from the Fourth Flight, I could be giving up 22 shots.”

That would be one shot on every hole — and two shots on the four holes rated the course’s toughest. Definitely a tall order, but one that Childress would relish facing.

The Country Club of Salisbury, like other area courses, has made social-distancing adjustments due to COVID concerns.

“One golfer per cart, limited numbers on the putting green and practice area, and we leave the pins in the hole rather than have everyone handling them,” Childress said.

Childress is just happy to be on the course on a regular basis. He knows he’s one of the lucky ones.

“I’ve got teammates from Florida and Massachusetts, and when they went home, their courses were shut down,” Childress said. “It would be tough not to have golf, tough not to be able to get outside every day, to clear your head, to get some fresh air. I’ve got the opportunity to play every day and the chance to keep getting better. I’m grateful for that.”