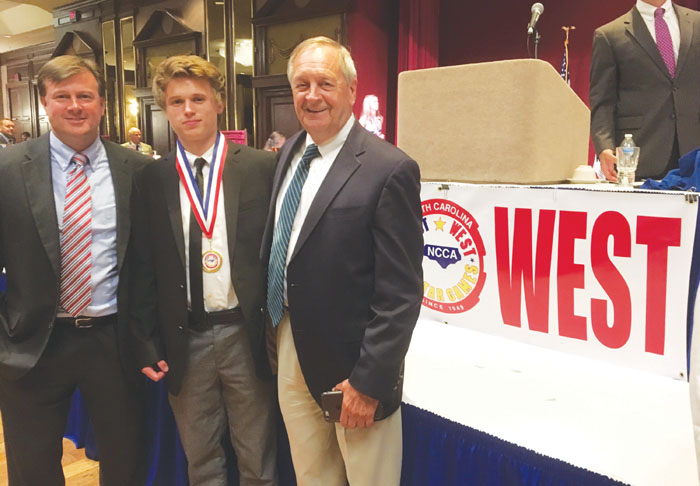 Submitted photo ... Three generations: From left, Paul, Bryson and Tom Childress, at the banquet for the East-West High School All-Star Game in Greensboro on Monday. July 15, 2019.

Four nights later, Smith proved too much for a strong Catawba team, coached by Sam Moir and led by future Hall of Famers Charles Lynn, Bill Bailey and James Brown. Smith poured in 32, half of High Point’s points, in a 64-61 victory against the Indians.

Forty-seven years have passed since that week when Smith wrecked Pfeiffer and Catawba, but the remarkable coach, who will turn 69 in June, is still in the game. He’s remembered by many for coaching the University of Kentucky to a national championship in 1998, but now he guides his alma mater, which became High Point University in 1991 and made the transition to Division I competition in 1999.

One of the players Smith will be coaching next season at High Point is Bryson Childress, Salisbury resident Tom Childress’ grandson. It’s one of those full-circle, very cool things.

A lof of Rowan County basketball fans marveled at Bryson when 1A North Stanly High played in the Sam Moir Christmas Classic his junior and senior seasons. Bryson is small and slight at 5-foot-10 and 145 pounds, but he’s skilled. He’s quick and an outstanding ballhandler and shooter. He finished high school in the spring of 2019 as the leading scorer in Stanly County history with 2,187 points. He’s one of the state’s top 25 all-time scorers, a remarkable achievement not just because he’s 5-10, but because he saw box-and-one defenses focused on stopping him more often than not.

He had a number of scholarship offers coming out of high school, but not the right offer, to his way of thinking, so he spent this school year at Hargrave Military Academy, playing on a powerhouse post-graduate team for head coach Lee Martin and Ben Veshi, former Catawba Indians. That team went 33-3 and was among the nation’s best.

“I had a lot of offers out of high school from SAC-level schools,” Childress said. “But the time I spent at Hargrave was really beneficial. There weren’t any box-and-ones. We had really talented guys who signed with SEC schools and we had three 7-footers. We had nine or 10 Division I guys. I improved every day in practice, going against great players. I practiced against size and quickness every day. And we played a tremendous schedule. We played against five guys that probably are going straight to the NBA from their post-graduate teams.”

When High Point got into the recruiting picture, Childress was elated. Not just because of its D-I status, but because of Smith’s presence.

He signed recently with Smith and the Panthers.

“It’s a chance to play for an old-school coach with great knowledge of the game,” Childress said. “High Point has a lot of history, a lot of culture, and it has a great business school. The location is ideal for my family. It’s the perfect fit in a lot of ways.”

He realizes that from his first day at High Point he’ll have to prove himself to a whole new group of doubters.

“Go in and prove it all again, I understand that,” Childress said. “It’s important that I never take that chip off my shoulder because that’s what got me here. I’ve got good basketball instincts. I understand where the next pass will be. I play heady and I play hard-nosed. Size is always going to be the issue for people when they look at me, but I’ve played against bigger guys my whole life. I think I’ve shown I can play against bigger guys.”

Childress is ahead of the game academically. He was in fine shape as far as the books coming out of high school, so he was able to get started with college courses while he was at Hargrave. While he’ll have four years of playing eligibility, he’ll be a sophomore academically at High Point before he steps on the court.

Maybe Smith, who took the High Point job in March of 2018, can change that — with some help from Childress. Smith, voted the national coach of the year three times, already has taken five schools — Tulsa, Georgia, Kentucky, Minnesota and Texas Tech to the Big Dance.

Childress  can pick up a lot of tips from Smith, who started his coaching career in the high school ranks. Childress may even become a coach like his grandfather, who guided Pfeiffer basketball for 20 years before moving into administration at Pfeiffer and Catawba, and his father, who coached Bryson in high school.

“I’m going to major in business, but I am starting to see coaching as a possibility,” Childress said. “I’m going to learn everything I can from Coach Smith. This is an amazing opportunity.”