Tilley Harley-Davidson to permanently close in Salisbury, consolidate in Statesville 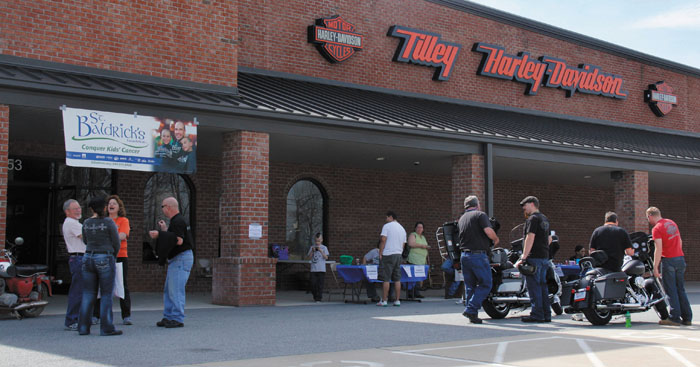 Many come out on Saturday to show support in different ways. Tilley Harley-Davidson in Salisbury hosted the first-annual St. Baldrick's Foundation, which is to raise money for childhood cancer research. People were encouraged to shave their heads in dedication. There was a live band, sharpie tattoos, face painting, baked goods and a silent auction. (Photo by: Maria Richardson, Salisbury Post)

SALISBURY — Tilley Harley-Davidson of Salisbury announced Saturday on Facebook that it would be closing its doors in Salisbury and moving all operations to its location in Statesville.

Tilley Harley-Davidson came to Salisbury in 1998 as a “secondary retail location” on Innes Street for seven years before moving to its current location at 653 Bendix Drive.

“We have been honored and thrilled to serve the motorcycling community in this area for 22 years,” said owner Derek Tilley in a Facebook post. “We hope to continue that service even now as we make the difficult decision to close our Salisbury location.”

Tilley noted in the post that the Statesville location, at 1226 Morland Dr., is 28 miles from Salisbury via U.S. 70, which serves as a “short scenic and relaxing ride with little traffic.”

“Any of our Salisbury customers with unfinished business, please know that we are working hard to make sure we fulfill your needs before we finally close our doors,” Tilley said in the post.

He added that Rider Rewards accounts and gift certificates will continue to be honored at the Statesville location.

The Salisbury location has been closed since March 30 when Gov. Roy Cooper’s stay-at-home order became effective. Prior to the decision to permanently close its Salisbury location, Tilley said he planned to reopen the doors on May 1.