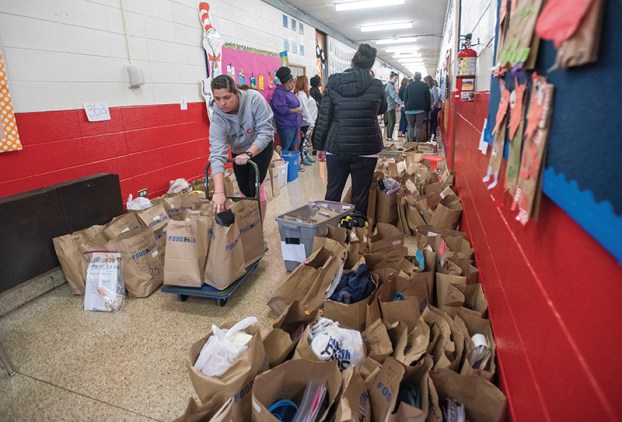 JON C. LAKEY/SALISBURY POST The Rowan Salisbury School system has been working to make sure that students that are away from school during the school closures have the ability to complete class work.

Nearly 1,100 RSS students not participating in e-learning during closure

SALISBURY – Julie Morrow, Rowan-Salisbury Schools assistant superintendent of curriculum and instruction, says there are just under 1,100 students who are not participating in the district’s e-learning during the state-wide closure of public schools, though that number is declining.

No matter how far the number of students not reached declines, Morrow said the number realistically will not reach zero. Students are not being reached because of a lack of consistent access to the internet, not having a school-issued device or their own choices. Morrow said the district is trying to keep students informed, and while RSS does have devices for every student, many districts do not.

“If we’ve not been able to make contact and they’re not turning in work, we’ve had principals even calling, teachers calling,” Morrow said.

The district is ordering materials to fill backpacks with grade-specific content to deliver directly to students not reached in hopes of getting in touch that way.

“We haven’t framed out what re-entry looks like yet,” Moody said.

Moody said some students will advance faster in some areas while outside of school and after thriving on e-learning. She said there will be others who keep up with support, some who lose ground and others who the district completely misses — who will not have had any real learning experiences since schools closed in March.

“We will get all four types coming back to school,” Moody said. “And when we do, we have to look at how we re-enter all of them.”

Moody said there are obvious inequities in Rowan County. Some students get the support they need to do well with e-learning; others do not.

Because the district is still working with most of its students, she said, it already has a handle on some issues it will have when getting back to normal. There are other questions about how schools should be cleaned going forward and meals served.

“There are a lot more questions, and I don’t have any answers  to any of those yet,” Moody said, adding that it will present a number of questions it comes up with to the board of education as they arise.

Moody said the district is determined to work with students to get them promoted to the next grade level. Its renewal status, she said, gives RSS curriculum flexibility for the schools to evaluate other parts of the student. For example, a student may accelerate in one subject area they are curious about but need more instruction in another.

The district is gravitating toward competency-based education based on mastery level of subjects rather than a block of material contained in age-based grade levels.

“There’s going to be a great deal of work to do, so don’t mistake me,” Moody said. “But we are one of the few school districts, in my opinion, in the country that actually was able and prepared to teach school the second day of this pandemic. That makes a big difference.”

Tilley Harley-Davidson to permanently close in Salisbury, consolidate in Statesville

Staff Report news@salisburypost.com SALISBURY — Tilley Harley-Davidson of Salisbury announced Saturday on Facebook that it would be closing its doors... read more