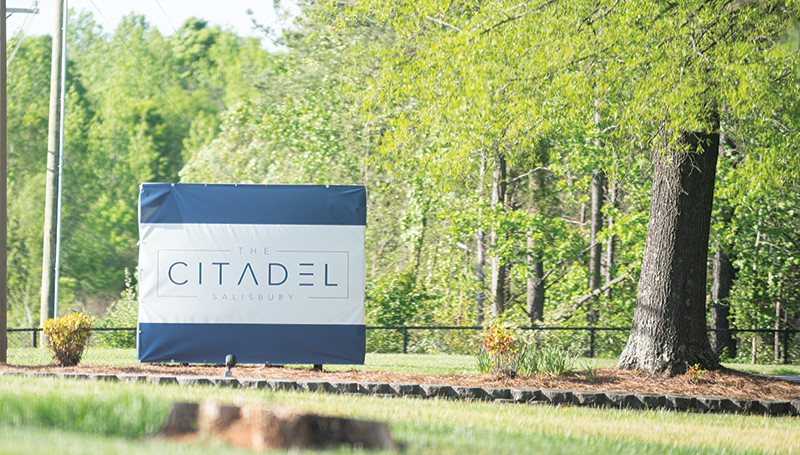 Josh Bergeron / Salisbury Post - The Citadel, a nursing home on Julian Road in Salisbury, is the site of a large COVID-19 outbreak.

SALISBURY — Marjorie Garvin, a resident at the Citadel at Salisbury nursing home who is seriously ill after testing positive for COVID-19, is suing the company in charge of the facility for negligence related to the care and conditions she experienced.

The Citadel has become a major center of new COVID-19 infections in the county.

“Accordius Health touts itself as ‘a regional leader in the Southeast for quality, satisfaction and clinical competency in skilled nursing care and rehabilitation’ with facilities located in North Carolina and Virginia,” the lawsuit states. “Accordius holds itself out to the public as having a ‘goal is to improve health and patient-driven care by placing residents at the center of their care. In fact, nothing could have been further from the truth.”

Accordius Health did not return a request for comment by deadline Tuesday.

The lawsuit says the Citadel was poorly staffed and supported by its corporate owners. On Feb. 24, the facility received an inspection report from late January showing unsafe and unsanitary conditions.

The suit claims Garvin “was a lucid and vibrant individual” when she, her family and caretakers placed her in the facility in February. And the family paid $11,000 per month for “a private room and quality care.”

The lawsuit notes unresolved concerns from resident council meetings about not answering call lights for three months and not cleaning shower rooms after showers for six months. It also alleges a mixture of unsanitary conditions in two of the facility’s shower rooms, including dry skin on a stretcher, gray grout that was colored black in several areas, black particles on a shower floor and walls and shower walls with long streaks of dried white drainage. That’s in addition to a white washcloth with dark brown spots hanging on a shower curtain bar and another wash cloth wadded up and on a shower shelf during another inspection, the suit alleges.

The suit claims Garvin was moved into another hall after contracting a urinary tract infection and running a fever. She was then placed in a room with a patient who tested positive for COVID-19 and, according to the lawsuit, her friends, family and a caretaker with power of attorney for Garvin were not told about the circumstances, including the urinary tract infection.

Garvin called her son to express her fears and confusion about what was happening. And the suit claims her loved ones could not reach nursing home staff. The suit claims the facility at this point had already transferred two residents to Rowan Medical Center for critical care due to COVID-19.

The suit says Garvin’s loved ones were not able to make contact with corporate representatives on April 13 and 14. Last week, Garvin’s caretaker with power-of-attorney privileges spoke to an administrator who advised that Garvin had tested positive for COVID-19. Loved ones were notified Garvin was in a weakened condition on Monday and requested to visit. Garvin’s son was told he and certain others could visit only if they arrived before 4:30 p.m., when the receptionist would leave.

When family and friends arrived, they were provided with a disposable suit, booties, a facemask and no gloves, the lawsuit states.

“When they were escorted to the quarantine hall, it was like walking into a death ward,” the suit states.

The lawsuit makes several claims of negligent behavior, including “the facility, due to the negligence and reckless conduct of the defendants compounded by a lack of funding, staffing, intervention or oversight” moved Garvin to the hall with one or more residents infected with COVID-19 without adequately assessing her, notifying her family and without “considering that she would be far safer if kept alone in her private room or if immediately moved to a hospital facility.”

The suit cites an opinion column published on salisburypost.com Monday and in the Post print edition on Tuesday by John Bream, head of the Novant Health Rowan Medical Center Emergency Department. The suit noted that Bream also expressed worries about failures to contact the family of a patient that tested positive for COVID-19. That patient died the next day.

Bream wrote that another patient from the Citadel was critically ill with COVID-19 and that he had to connect the patient’s daughter via video conference app FaceTime to spend a final moment with her father, who died 18 hours later.

Bream said a hospital nursing staff member had family at the Citadel and also had not been notified about the outbreak.

The suit also notes the apparent financial resources of the companies in charge of the facility, Accordius Health and its parent company the Portpiccolo Group, which does business in New Jersey and the greater New York area. That includes a $36.9 million deal in September with Capital Funding LLC to take over day-to-day operations of facilities in Virginia and Maryland.

“Our firm is very concerned regarding the issues exposed by the facts that are known in this case,” said Mona Wallace, of Wallace and Graham, in a statement provided to the Post.  “The public records regarding this nursing home facility reflect that unsanitary and unsafe conditions existed even before the virus came to our area.  The residents of elder care facilities are some of our most vulnerable citizens.  They deserve much better.  Not only the residents, but their family members, friends, the staff, and physicians have all been exposed and put in jeopardy because of what has occurred.  We believe the company should have done much more to anticipate and guard against the COVID-19 virus before it was too late.”