“It was my Easter”: Salem Lutheran Church pastor details recovery from COVID-19 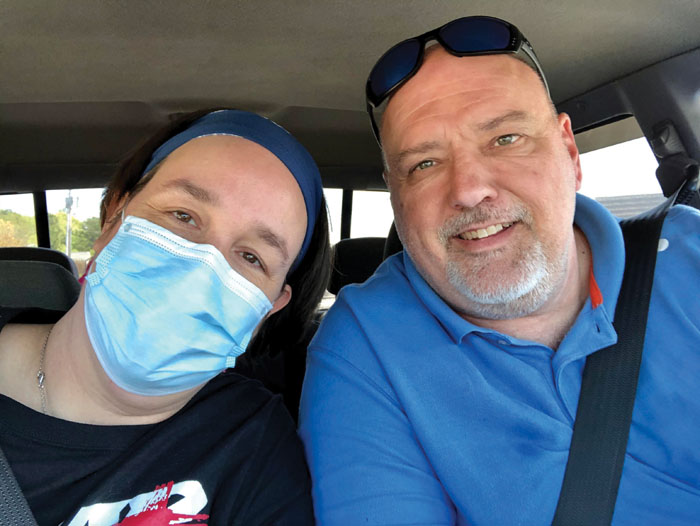 Dawn and Doug Rister driving from the hospital to their home in South Carolina on Wednesday. Pastor Dawn Rister was diagnosed with COVID-19 and was put on a ventilator for 10 days.

The Thursday before Easter, Maundy Thursday, commemorates the washing of the feet and the Last Supper of Jesus with the Apostles. It was also the day Rister was taken off a ventilator and left intensive care after being diagnosed with COVID-19. In an interview with the Post, she described being sick with the coronavirus-caused disease for about a month.

Her church’s executive committee met March 16 to discuss how the institution would deal with the COVID-19 pandemic and what changes should be made. The six members distanced themselves and met in the parlor instead of the office of the church — at 5080 Sherrills Ford Road.

On March 19, Rister began to not feel well. The next day she was tested for the flu, and the test came back negative. Rister said, “It all just went downhill pretty quickly from there.”

Four days later, she called 911 and was rushed to the hospital. On March 29, the 49-year-old was put on a ventilator. She has no preexisting medical conditions.

While on the ventilator, Rister said she had hallucinations of “bizarre things,” including going to different hospitals and, one night, going to camp, though she remained at Novant Health Rowan Medical Center throughout the experience.

Her faith was an anchor in the storm of COVID-19.

“Even in the midst of tremendously, horrible, horrible hallucinations, I do remember feeling God’s presence in all of it,” Rister said. “That was the pull that kept me there. I don’t say that because I’m a pastor. God’s word would pop into my hallucinations, and it wasn’t a hallucination. It was keeping me here.”

When she was removed from the ventilator, Rister remembers the joy of the hospital staff.

“It’s very humbling to have total strangers love on you and care for you in a such personal way,” she said.

One of the things that makes the ongoing pandemic different than most is that people can’t be in the hospital with their family, Rister said. The staff fills that role. She remembers coming off the ventilator and being sponged water by a nurse, something she had seen many loved ones do for the spouses to give them water.

Rister said she couldn’t sit or stand up. Receiving water through “someone else’s hand” gave her life, she said.

“God is with us in this storm and he was my anchor in all of this,” Rister said. “I just feel tremendously blessed that Christ would choose to pull me off that ventilator and breathe air into my lungs on Maundy Thursday. It was my Easter.”

Rister left the hospital last week — on Wednesday. With her husband Doug at the wheel, they drove to their South Carolina home. During the drive, he reached over and touched her leg, the first time she had been touched without a glove for a month.

Rister, though, wasn’t the only one from Salem Evangelical’s March 16 executive committee to be diagnosed with coronavirus. Four of the six members who met were diagnosed.

Ken Jones, 55, developed a low-grade fever and began to feel achy on March 22. The fever only lasted that day, but he continue to feel achy and had a headache. He later lost the ability to taste and smell. He also got a dry cough and tested positive for COVID-19 on March 24 — the same day Rister entered the hospital.

Jones never went to the doctor or took any medications. In a week, he started to feel better, though his cough lingered and he lost 10 pounds.

“I kicked it in the butt,” Jones said. “I just kept moving. I sure didn’t get nothing like the pastor got. Bless her heart. She got beat up pretty hard.”

Harold Snider, a 77-year-old retired nurse, began to feel unwell on March 20. The next day, he tested negative for the flu. Then, it was COVID-19. Snider has diabetes and heart disease. By the morning of March 24, he received the results: he had coronavirus. Snider’s wife told him he was the county’s fifth case.

He had shortness of breath, was feeling weak and had lost the ability to smell and taste. He was forcing down fluids, but it wasn’t enough.

He later went to the hospital and got a half liter of fluids. He returned the next day and got another liter.

“After that is when I really began to think I was going to live,” Snider said. “Not that I was better, but I came home and I could at least drink.”

Now, he hasn’t had a temperature for a week.

Snider said he is thankful everyone is feeling better and that the church’s pastor is out of the hospital and resting.

Jones said the lesson is “God has this.”

“I can’t tell you how many tears have been shed and how many prayers have been lifted,” Jones said. “If she hadn’t made it and we all made it through, we would’ve known that God needed her more than us. We are all very thankful we got her, and there are some giant lessons.”

He is grateful they all made it through recovery.

“I would have traded places with her 1,000 times,” Jones said. “Our hearts hurt. You can’t say how much she means to our congregation and to all of us.”

Rister said she feels “tremendously blessed” about the outpouring from the community through the prayers, cards and the greeting she received when she returned home.

“It’s humbling,” she said. “It’s easier to be the caregiver than to be the receiver when you’re a person that’s a caregiver.”

Rister will remain in quarantine for a week. She’s currently in South Carolina with her husband and three kids. Doctors said it will take up to six months for her to get her strength back.