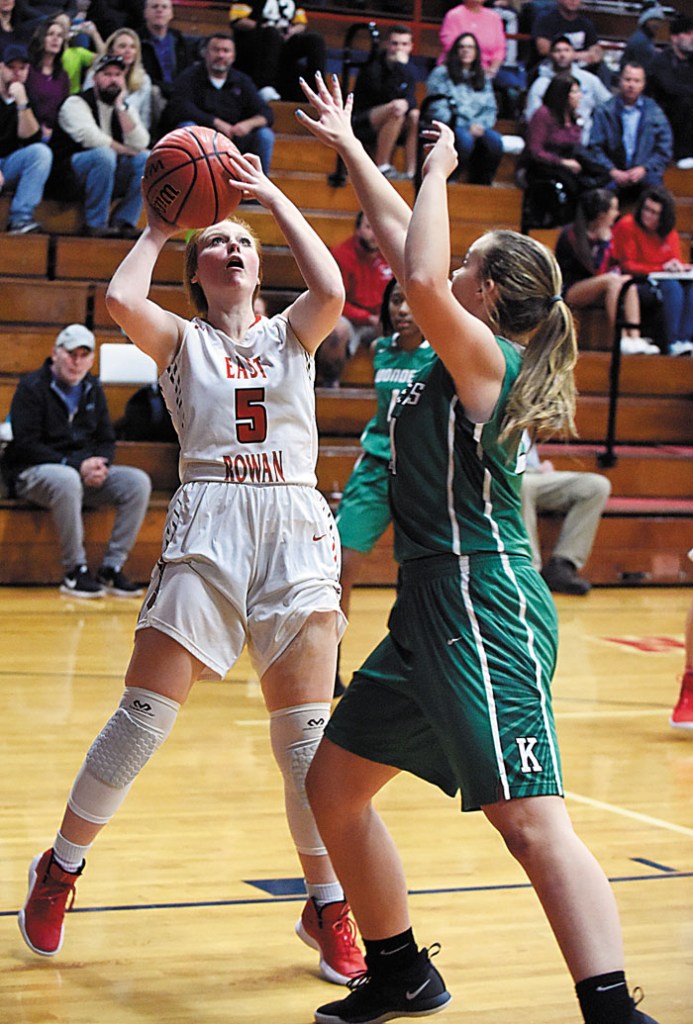 SALISBURY — Caroline Houpe’s senior stats for East Rowan — 5.1 points, 2.6 rebounds and 2.1 assists per game — aren’t superstar stats, but there are reasons to believe she’ll be successful in college basketball and that her athletic ability will help her get an education at Concord University.

Her goal is to become a special education teacher.

In a lot of ways, Houpe is ahead of the game. A lot of high school scoring stars have to make a painful transition to role player in college. That’s a transition Houpe has already made willingly in high school.

Houpe is 5-foot-7, with good strength and good length. She’s tough, she’s aggressive and she’s made herself a pretty good 3-pointer shooter with countless hours in the gym.

She had to spend most of her high school career as an undersized post player, although she was finally able to move to the wing full-time as a senior with the addition of tall freshmen Leah Hinceman, Haley Dalton and Icesis Nwafor.

“She’s more of a guard or a wing player than a forward, but she had to play inside a lot,” Holland said. “That cost her some individual stats, but several college coaches said they loved her versatility. That’s a big reason she’s getting this opportunity.”

Houpe started playing at the YMCA when she was 5 years old.

She’s played a lot of basketball over the years, not just as a four-year varsity player at East, but with the Winston-Salem Stealers AAU program.

“The Stealers were a great organization to play for and did a lot to help me,” Houpe said. “You give them a list of your top five schools and they contact those schools and do everything they can to get them to come watch your tournaments. Then you can get feedback on what you did well and what you need to work on.”

Putting in the time to get better was never a problem for Houpe. She poured a lot of sweat into basketball.

“She’s a great example of what happens when someone puts in the work,” Holland said. “She’s a typical gym rat who never missed practice, never missed a workout. She works out with trainers. She plays travel ball. She puts in the classroom work. She did everything you can do to get to the next level. Then she and her family did a great job of finding a school that met what she was looking for.”

One of the criteria for Houpe’s ideal college didn’t have anything to with hoops or classes. She wanted mountains.

Concord, located in tiny Athens, W.Va., checked that box. It’s about as scenic as it gets. The elevation is 2,585 feet.

The Concord Mountain Lions play in the D-II Mountain East Conference. They have a mascot named “Roar,” and they have a good program. They were 21-9 last season and placed fourth in a 12-team league that is mostly West Virginia schools.

The most famous person who graduated from Concord was the late Robert Byrd, who served as a U.S. senator from West Virginia for 51 years. As far as living people, the most famous is probably former female boxing world champ Christy Martin.

Houpe made the initial contact with Concord. She was invited to attend a camp there and impressed coaches.”

“I played really well at that camp,” Houpe said. “After that, they followed me and stayed in contact with me.”

COVID-19 has made it a crazy spring. Houpe was excited about her senior softball season, but it was cut short.

She was looking forward to the traditional signing party at the school, but when she officially signed with Concord last week, it had to be a family affair.

East’s transformation under Holland the last four years from four wins, to five wins, to 14 wins, and then 20 wins this past season, was spearheaded by three seniors who stayed the course — Adalie Harrison, Grace Eagle and Houpe.

“It helped that we had some tall people this year,” Houpe said with a laugh. “But the main reason we did so well and won 20 games was our team bond was so good.”

Houpe quietly scored more than 500 career points for the Mustangs.

Her career high was 16, while her season high was 13. But she says the game she’ll always remember from her senior year will be winning against a strong West Rowan team in a North Piedmont Conference game played in Mount Ulla. That’s a game she only scored four points in, so that tells you a lot about Houpe and what’s important to her.

East’s growth from Houpe’s freshman year to her senior year was even wilder than it sounds. In 2016-17, East was losing by 25 points on an average night. This past season, East won by an average of 13 points.

“Our three seniors left a unique mark on this program,” Holland said. “When you go from four wins to 20, it says a lot about work ethic. It says a lot about improvement. Caroline has earned the chance to keep playing basketball.”