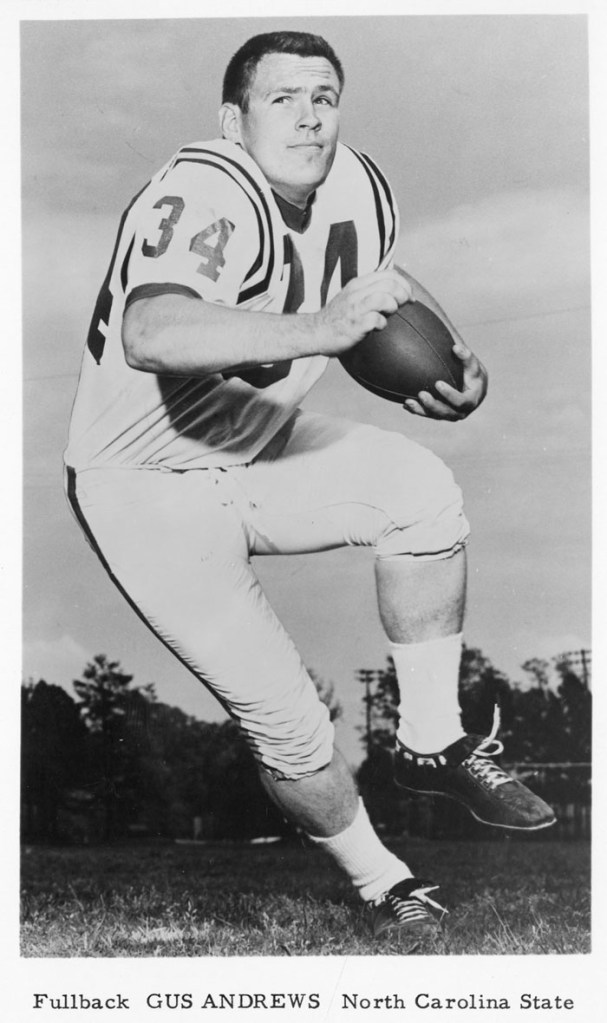 SUBMITTED PHOTO Salisbury resident Gus Andrews had a strong football career as a fullback, linebacker and kicker at North Carolina State. Andrews, who has lived in Salisbury since the 1980s, was inducted into the Hall of Fame in his hometown of Tarboro. 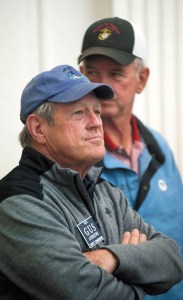 Gus Andrews waits for the results of the Rowan County Commission primary election on May 8, 2012. Photo by Jon C. Lakey, Salisbury Post.

SALISBURY — Gus Andrews is known now for senior golf and he’s remembered for the five seasons he was head coach of Salisbury High’s football team, including the 10-2 1988 squad.

Some may remember him from his days in uniform in the 1960s, as a rugged football player for N.C. State.

There are places where the 75-year-old Andrews is even more famous than he is in Salisbury, where he has lived since the 1980s.

Five years ago, he was inducted into the Athletic Hall of Fame in his hometown of Tarboro.

He’ll enter the Wilson Fike High Hall of Fame later this year. That ceremony had been scheduled for May 2, but it has been postponed by COVID-19 concerns.

From the start, Andrews wasn’t average when it came to work ethic. The son of mill-workers in Tarboro, his first experience with hard labor came from filling fruit baskets for his father’s part-time business. His breaks from filling baskets were spent shooting basketballs and kicking footballs. He became proficient at both of those things.

Sports competition was a 24/7 activity in Tarboro 60 years ago, and Andrews was blessed with friends and future teammates who shared his passion for athletics. Vacant lots were transformed into football and baseball fields.

Andrews remembers the thrill of receiving his first football uniform as a seventh-grader. Leather helmet with an elastic strap and no face bar. Old shoulder pads that were too big. Cardboard hip and thigh pads. He took the first real football hit of his life from a future mayor of Tarboro.

“Knocked me flat on my back,” Andrews said. “It hurt.”

Backyard track meets were held, with distances carefully measured. There were sprints and jumps, even pole vaulting with bamboo poles and cross bars. Precise records were kept on everything.

There was putt-putt, swimming, full-court basketball at the recreation center and Little League baseball trips to regional and state playoff games.

“Sports were a way of life,” Andrews said. “So many young guys having so much fun together, and it didn’t cost one dime.”

Nine of the boys from Andrews’ “backyard competitions” became Division I athletes in the years from 1957-62, at East Carolina, Wake Forest, South Carolina, North Carolina or N.C. State.

Andrews was only 5-foot-9, but he was stout. He was an outstanding high school athlete, especially in football, where he started both ways for four years. During his four years at Tarboro High, he made a transition from lineman to halfback/linebacker. He rushed for 1,296 yards as a senior. He was a National High School Wig Wam All-American and was chosen for the 1962 East-West All-Star Game in Greensboro.

Andrews was an all-conference basketball player, averaging 18.4 points as a senior. He started four years as the baseball team’s third baseman, while standing out in track and field in the 100, 200 and pole vault. Among other awards, he won the Malcolm Linwood Baker Award, as the player who best exhibited Christian qualities on the playing field. The Baker for whom the award was named had been one of his best friends, but he drowned on a camping trip.

Andrews was the first from his family to go to college. He had a lot of interest in Duke — the first college football game he’d ever seen was a Duke home win against Clemson — and he’s gotten to meet Duke’s star back Wray Carlton. But Andrews’ most comfortable recruiting visit was to N.C. State. and he joined his childhood friend, Glenn Sasser, with the Wolfpack.

Andrews and the rest of his classmates played on the freshman team in 1962. Andrews, who saw lots of action as a fullback and linebacker during his years with the Wolfpack, also took over kicking duties as a sophomore.

In 1963, on a somber day shortly after the assassination of President John F. Kennedy, Andrews set an ACC record with six PATs in a romp against Wake Forest.

He played in a frigid Liberty Bowl in Philadelphia against Mississippi State. The Wolfpack was fortunate to wear winter underwear borrowed from the NFL Eagles or players would have frozen. Andrews kicked off to start the game, and it was so cold his foot hurt.

“I remember thinking that I hope we don’t score because I’ll have to kick off again,” Andrews joked.

In 1964, he kicked the deciding PAT in a 14-13 win against Maryland. It was the last PAT he kicked for the Wolfpack. They brought in a kicking specialist for the 1965 season.

Andrews accomplished the rare feat of lettering for ACC championship teams in 1963, 1964 and 1965.

He stayed busy off the field while he was at N.C. State. He won academic awards and became a high school basketball official. At a Fellowship of Christian Athletes camp in Buffalo, he had a chance to swing a bat against legendary lefty Warren Spahn.

“I fouled off two before he struck me out,” Andrews said.

Andrews wanted to coach and had made a commitment to help coach the N.C. State freshman in the fall of 1966.

Wilson Fike needed an assistant for the 1966 season, and Andrews had been highly recommended by several coaches, including his East-West All-Star Game coach Chris Carpenter. Their schedules were busy, so Fike head coach Henry Trevathan, who had come to Fike from Rocky Mount in 1964 with the mission of turning around a downtrodden program, interviewed Andrews late one night in Wilson. Trevathan was so impressed by Andrews that he didn’t fill his vacant coaching position for the 1966 season. Andrews joined him at Fike as offensive coordinator in January of 1967.

History was made by that staff at the state’s smallest 4A school. The Fike Cyclones, kids from the tobacco fields and steel mills, became a dynasty. They went 36-3 from 1967-69 and won three straight 4A state championships. No one had ever done that.

In the 1967 4A state championship game, Fike’s star back Carlester Crumpler scored four TDs in the second half as the Cyclones rallied against South Mecklenburg.

When Trevathan left Fike for East Carolina University, Andrews was the interim head coach, but he couldn’t turn down an offer from N.C. State to coach the Wolfpack’s linebackers. He worked under head coaches Earle Edwards and Al Michaels and helped coordinate recruiting.

Michaels was fired after a 3-8 1971 season, and Lou Holtz was hired to replace him. Holtz brought his assistants with him from William & Mary, and Andrews was figuring out the next step to take in his life.

With one small child in the house and another on the way, he turned down a chance to move his family cross-country to be on a new staff at the University of Oregon. He took a leap of faith into the business world. The president of Russell Hosiery was a Wolfpack alum, and Andrews went to work with the athletic division. He found his niche in sockwear, and “Russell National Sports Socks” became an industry leader. Andrews traveled the country, built a sales force and met many top pro athletes. At one dinner in Kansas City, he sat down with Dick Butkus, Ray Nitschke and Paul Hornung.

“I could not have worked with better people or been given a greater opportunity,” Andrews said.

The only negative with sales was that Andrews was on the road five to seven days a week.

When Wolfpack Club president Warren Carroll, who had built the club into one of the nation’s strongest alumni organizations, announced he would be retiring due to health reasons, Andrews, who had been very involved in the Wolfpack Club, was a potential replacement for Warren.

But the road forked again. Andrews got a call from East Carolina AD Bill Cain and was hired as director of the Educational Foundation (Pirate Club) and associate athletic director.

Carroll and Ernie Wiliamson of the UNC Rams Club provided Andrews with a lot of help and insights. Andrews implemented the entire Wolfpack Club structure with the Pirates and set an unheard-of goal of $400,000 for the first year. That goal was met. The first-year tally was $440,000.

“And it’s grown,” Andrews said. “A lot of the energy for that growth came from football coach Pat Dye’s program. Scheduling Duke, N.C. State and UNC in football — and beating them — lifted the energy off the charts. It was a great time to be part of the ECU family.”

From 1981-84, Andrews returned to the football coaching ranks as the head coach at Fike. In four seasons with the Cyclones, his record was 32-12. He was coach of the year once and won a conference championship.

He and his wife, Barbara, came to Salisbury in 1985 when he was hired as head coach of the Hornets.

“The Salisbury program was in disarray,” Andrews said. “We got brick donated and got a weight room built. We installed discipline. We got things moving in a positive direction.”

Andrews made his first venture into politics in 2000 and received the most votes in the race for county commissioner. He served as vice chairman two years and chairman for two years.

The day Pillowtex (formerly Cannon Mills) shut down in July of 2003, 7,650 people in the area lost their jobs, the largest permanent layoff in the history of the state.

“It was a difficult time locally with those textile jobs leaving the state,” Andrews said. “With the help of a lot of great people at the local, state and national level, we helped a lot of people through that ordeal.”

Andrews has been very successful in the real estate business, drawing on the organizational skills he learned through sports. His partners were people he met through N.C. State and East Carolina. He was involved in 26 waterfront developments from 1994-2008.

He’s continued to compete at a high level in his later years in a variety of sports.

His wife’s interest in white water rafting got him involved in that challenging sport. Among other adventures, he had a nine-day rafting experience on the Colorado River, inside the Grand Canyon.

“Strong currents — and cold,” Andrews said. “We watched sunrises and sunsets and slept under the stars. It was an amazing experience.”

He’s been highly successful in bass tournaments. Fishing expeditions have taken him as far away as Canada.

In golf, he’s had Senior and Super Senior success not only in the Labor Day Four-Ball at the Country Club of Salisbury, but in the North Carolina Senior Games. He’s qualified for and competed in the National Senior Games. He’s placed as high as fourth in the World Senior Amateur.

He’s even taken a stab at Salisbury Community Theater. In three productions, he’s portrayed a judge, a drunk and a psychiatrist.

He’s had an pretty incredible life, all starting in those backyard games in Tarboro.

“Sports were always at the center of everything,” Andrews said. “So many positive things happened to me because of sports.”