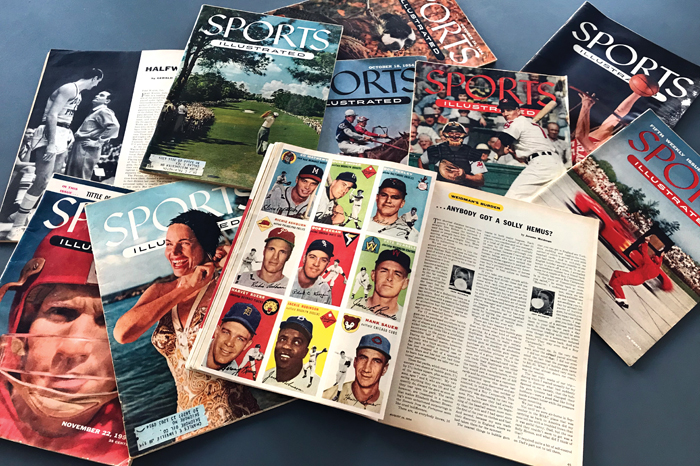 Some of Mike London’s collection of Sports Illustrated magazines from 1954 and 1955. Photo by Andy Mooney, Salisbury Post. 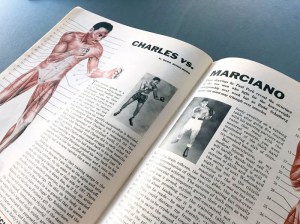 A Sports Illustrated article from Sept. 13, 1954, on the fight between Ezzard Charles and Rock Marciano. Photo by Andy Mooney, Salisbury Post.

I received a lot of terrific Christmas presents growing up in the 1960s, way more than I deserved.

There was a telescope, an electric train that blew smoke, a helicopter that took flight, a fire truck complete with wailing siren, a coin collecting kit and hundreds, maybe thousands, of those plastic World War II soldiers from the Sears and J.C. Penney Christmas catalogs, with all the tanks, jeeps and landing craft that accompanied them.

When I was in fourth grade, a sandy patch in our backyard in Kannapolis would be transformed into the D-Day landing at Omaha Beach a couple of times a week. I liked history.

I discovered the joys of baseball cards in 1961, the year I turned 6. With plastic scissors, I hacked apart dozens of Post cereal boxes — before the cereal was consumed — to snatch the cards off the back.

When I was 11 in 1966, I had my first encounter with Sports Illustrated. My friend across the street, Doug Wilson, was a worldly 16. He owned a decent stack of the weekly magazines, with their colorful covers. One day, after a spirited Wiffle Ball battle in his driveway, Doug offered to swap his SI stash for the latest Topps baseball cards of his heroes — Willie Mays and Sandy Koufax. My team was the Yankees. I considered Mays and Koufax expendable. I made the deal.

In the winter of 1969, I was a ninth-grader at Cannon Junior High. That’s when I was presented with the best Christmas gift I ever received from my mother, and I got it early — a year’s subscription to Sports Illustrated. The cover price was 50 cents, but you saved more than half the cost if you subscribed. One of the greatest bargains ever.

The first issue to land in our mailbox featured Milwaukee Bucks rookie Lew Alcindor on the cover. Lew wouldn’t become Kareem Abdul-Jabbar until 1971. I’d hated Lew passionately as he dominated college basketball for the UCLA Bruins, but the SI feature story revealed he wasn’t such a bad guy, after all.

In the following weeks, the Minnesota Vikings’ “Purple People Eaters” defensive line; Oklahoma back Steve Owens, who was pounding toward the Heisman Trophy, and the college basketball preview issue, with its majestic Pete Maravich cover, appeared, gently folded by the postman. It was cool to be receiving mail addressed to me, for the first time. Well, other than birthdays.

Thursdays — the day Sports Illustrated arrived like clockwork — became my favorite day of the week. On Thursdays, I’d sprint from the school bus door to the front porch. You would have thought a bully was chasing me.

The 10th issue of SI I received brought the first glitch. Swimsuit issue. Cheryl Tiegs swimsuit issue. My mother had not been aware that an annual swimsuit issue was published, and I’m sure I wasn’t either. Doug hadn’t traded me any swimsuit issues — for obvious reasons.

While my subscription was nearly canceled in its early stages by one of those angry letters SI received each winter from outraged moms, my healthy relationship with SI continued by the skin of its teeth. I recall I did extra chores to bribe my mother. And my older sister came through by getting into some sort of trouble. That diverted attention from me and my risqué magazine.

What would become the most valuable 1970 issue of SI arrived that summer, although I was disappointed not to see a baseball player featured. On the cover was a teenage distance-running phenom from Oregon I’d never heard of — Steve Prefontaine. He would help inspire the running boom of the 1970s as well as a few movies. He would die young, five years later.

Despite Ms. Tiegs and her skimpy attire, my mother faithfully renewed that SI subscription every Christmas through my high school days. The ultimate issue came in July of 1973, the summer between my A.L. Brown High days and my freshman year at UNC. The Yankees’ Bobby Murcer and Ron Blomberg beamed in pinstripes on a blue cover under a yellow headline that read “Pride of the New Yankees.”

Even 47 years later, that particular issue has minimal worth to collectors, but to me, probably the biggest fan Murcer ever had, that cover is priceless. Murcer played 17 big league seasons and was featured in several magazines, but he was only on SI’s cover once.

Caught up in actually seeing ACC games live, I allowed my SI subscription to lapse in college. Some amazing covers — N.C. State’s David Thompson leaping right into your living room on the 1973-74 college basketball preview cover and the same Thompson rising impossibly high over UCLA’s Bill Walton in the NCAA Final Four a few months later — I would not own until much later in life. Those monumental photos made SI special.

I began collecting sports memorabilia in 1980. Most collectors were focused on the far more volatile rookie cards at the numerous sports memorabilia shows, so I searched for bargains in the quieter sector of publications. I found bargain-priced SIs from the 1950s and early 1960s that I’d never seen before. Covers with Jerry West and Wilt Chamberlain, with John Unitas and Jim Brown. Covers with Mays and Koufax.

About 25 years ago, I started subscribing to SI again. At the same time, I took the plunge, decided to complete a collection of every issue from the first one in 1954 (the year before I was born) through 1979. That’s roughly 1,250 issues, a quarter century I considered the good ol’ days.

When I got a sweet deal on SI’s debut issue (Braves slugger Eddie Mathews is on the cover), it was the trigger to making a serious effort to accomplish the task.

Like the first issue of SI, the second one included pages with copies of Topps baseball cards, which adds to the desirability and expense. But I bought it.

Fortunately, a high percentage of the earliest SI issues have dogs, birds, lions and horses on the covers, so they’re not that costly. I assembled all of the 1954 issues — they started with Mathews in mid-August — with relative ease.

The first Mickey Mantle SI cover from 1956 did take a substantial bite out of a paycheck. Mantle died 25 years ago, but he remains the idol of thousands of men who were boys in his golden days in the 1950s, as well as the first half of the 1960s, when he was still a marvelous player. The cost of aging Sports Illustrateds, like all collectibles, still hinges on the twin pillars of supply and demand. There’s serious demand for Mantle.

I’m still not all the way home yet, but I’m rounding third. I need 14 issues to complete my SI journey.

The most expensive one I don’t have is, of course, a swimsuit issue — the very first one from 1964. It’s actually pricier than that 1956 Mantle cover. Most swimsuit issues, even the ones featuring Tiegs or Christie Brinkley, aren’t nearly as valuable as you might think. The reason is simple: every male in America saved them. They didn’t get thrown out.

No Sports Illustrated ever published would qualify as rare, or even scarce. Circulation always has been high. A decade ago, the magazine still had at least 3 million subscribers.

The print world has changed in that last decade. That’s true for Sports Illustrated as much as it is for local newspapers.

SI, a mighty, booming weekly for more than 50 years, no longer arrives in the mailbox every Thursday.

In January 2018, the magazine cut back to two issues per month. In 2020, SI has become a monthly publication, plus four special issues and the swimsuit issue. The rate per issue is loftier now than it was in simpler times. The cover price is $5.99.

The latest SI, dated April 2020, presents a wordless blue cover with a photo of forlorn, empty seats due to Coronavirus Disease 2019 (COVID-19).

I suppose the May issue will focus on the NFL draft.

SI no longer sends special offers and asks if you’d like to renew your subscription. Now you are automatically renewed (via your credit card) unless you make the effort to notify the magazine online or by phone to close the subscription.

I’ve loved SI a long time. I remember my late mother whenever a new issue arrives. I also remember that feeling I had as a kid, sprinting to the mailbox, eager to see who was on the cover of the new issue.

If anyone should be supporting a fading print publication it’s me because I’ve made a living writing for a newspaper for the last 25 years.

But it’s still not an easy call to make.