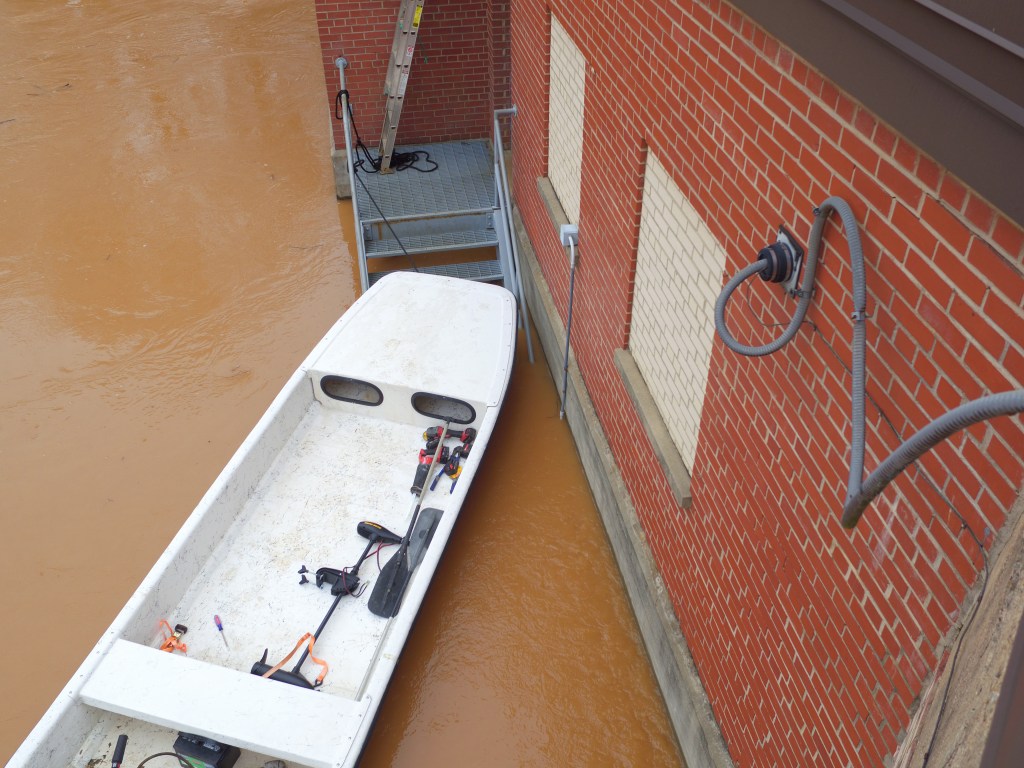 A boat to access the Salisbury Pump Station on Feb. 8.

Much of what a local government does boils down to dollars and cents. In the most simplistic terms, when expenses outpace revenue, taxes must be increased on property owners or services must be reduced.

That’s not universally true, however, and certainly not so with essential services like clean water. It’s hard to impossible for a city to back away from a commitment to provide clean water, especially in a case like Salisbury-Rowan Utilities. The utility serves more than 52,000 customers across Rowan County and provides water for 85% of businesses.

But on top of already approved plans, the utility is facing a real possibility that problems on the Yadkin River could result in a big expense to preserve the future of the city’s drinking water supply.

Salisbury is challenging plans by High Rock Dam owner Cube Hydro that the city says do not address flooding and sediment problems on the Yadkin River.

In the decades since the dam’s construction, the Yadkin River has dumped massive amounts of sediment into the High Rock Lake area. That’s led to new acres of land, more severe flooding from less intense storms and a water intake that’s threatened by those steady changes. Think of it like a miniature delta. The progression from the earliest available maps to today show the river turning shallow sections of High Rock Lake into islands, complete with trees and wildlife.

When it floods, as happened in February, the utility’s workers are forced to spring into action to ensure pumping equipment isn’t damaged. In February, Salisbury-Rowan Utilities workers were forced to travel by boat to the city’s pump station on the river to prevent damaged equipment, among other problems.

Through its recent filing, the city of Salisbury hopes to secure commitments from Cube Hydro that prevent flooding issues from becoming a crisis. Otherwise, it may need to shoulder the burden of moving its water intake and pumping equipment, thought to be around $20 million, says Salisbury City Councilman David Post. That’s on top of $40 million in debt the city agreed to take on to improve the Grant Creek Wastewater Treatment Plant and the city’s water treatment plant as well as refinance debt.

While Cube Hydro did not build the dam decades ago, it owns it. And it’s responsible for how it affects the environment around it. A solution could be, as the N.C. Department of Environmental Quality suggested, moving sediment near the city of Salisbury’s water supply intake and creating a flood protection plan or paying to move the intake entirely. The city of Salisbury says it doesn’t have a particular preference in how Cube Hydro works to prevent flooding from being an issue, just that it takes on the task.

We hope Salisbury’s and Rowan County’s federal representatives in the U.S. House and Senate look for ways they can help, too, whether that’s through advocacy to the Federal Energy Regulatory Commission or by submitting their own letters to accompany the filing.

There are plenty of items in local government that are about just dollars and cents, but flooding at the city of Salisbury’s water intake centers on whether the city can provide clean water at an affordable price for decades to come.