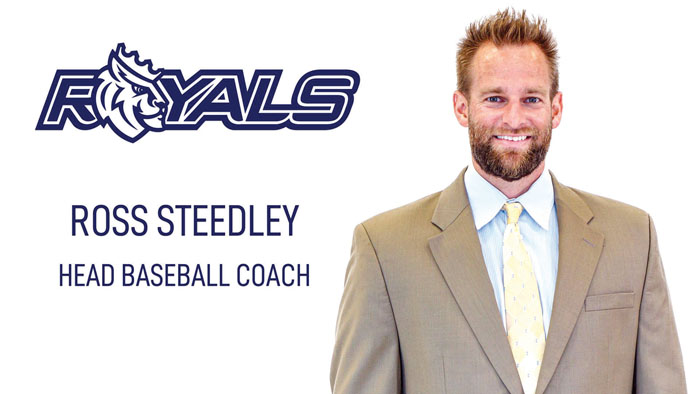 GRANITE QUARRY — Ross Steedley remembers his mother, Roxanne, asking the traditonal question: “What do you want to be when you grow up?”

She asked it while she was driving the Steedley boys somewhere. Spencer was 9. Ross was 6.

Spencer spoke up first with a standard answer to that frequently asked query: “Pro baseball player.”

Ross doesn’t remember if his mother laughed out loud or just smiled. She knew she had her hands full with her second son.

“That’s a true story,” Steedley said on the day he was named head coach at Queens University, a Division II school in Charlotte that competes in the South Atlantic Conference with Catawba. “I don’t know how many kids actually get to do what they dreamed of doing, but Spencer did. He played pro baseball. And now I’m a college head coach. Growing up, I was glued to the TV for every ballgame and every sport. But more than the players, I was watching the coaches — Coach K, Bobby Bowden, Phil Jackson.”

The Steedleys have athletic genes. Their father, Derry, was a three-sport athlete for East Rowan and broke records as a quarterback in the mid-1970s. Roxanne’s side of the family, Gordys, also were exceptional athletes.

While Ross would become a fine baseball player for East Rowan, Rowan County American Legion and the Charlotte 49ers, Spencer was even better. A power-hitting and hard-throwing lefty, Spencer  was a two-way star for Charlotte during his college career. In 2006, he made all-conference as a hitter, batting .319 with 13 homers and 63 RBIs in 56 games. In 2007, he was 8-2 on the mound and was an all-conference pitcher. Drafted by the Minnesota Twins, he hurled in the minor leagues for five seasons. He made minor league all-star teams in 2008 and 2009 and made it as high as Double A.

Ross’ playing career was less spectacular and less healthy than his brother’s. He was the starting catcher for four seasons for East Rowan teams coached by Allen Wilson, and then Brian Hightower. In Ross’ last two high school seasons, East competed in the 4A Central Piedmont Conference and still put together 20-win seasons. Ross closed some games his junior year. His senior year in 2007, he surprised everyone by becoming a strong starting pitcher. He was 7-3 with a 1.84 ERA. He also swung the bat well, caught superbly and was a Mark Norris Memorial Award winner as co-player of the year in Rowan County.

“I was always better behind the plate than on the mound, but I enjoyed the competition either way,” Steedley said. “I had a chance to play for great coaches and I got to play with athletes at East like Corbin Shive, Trey Holmes and Justin Roland. Those years in the CPC, taking on West Forsyth, Mount Tabor, North Davidson, you had to buckle down every night. West Rowan had a lot of talent then — Wade Moore, Zeb Link, Weston Church. I got to play against them in high school and with them in Legion ball. When you made the Rowan Legion team in those days, it felt like you’d made the New York Yankees. Rowan Legion was great preparation for college baseball and for life. I learned to play under pressure and I learned how to play in front of a lot of fans. All those years of competitive baseball was a character-builder.”

There were shoulder and knee injuries, so he was only fully healthy at Charlotte for one season (2011), but he batted .342 with 31 RBIs in 44 games and was first team all-conference. He hit.324 in his college career, contributing to three championship teams and two teams that went to the NCAA tournament.

He got his degree in communications.

“I was never very good in math and science, but talking always came easily,” Steedley said. “I never wanted the suit-and-tie life. I was hoping that degree would lead to a life spent on ball fields.”

His first baseball coaching experience came during college summers when he was rehabbing injuries. He worked under Hightower one year with the Rowan County Junior Legion program and helped Gantt one summer with the senior team.

“I knew a long time ago Ross would be a head coach at some point,” Hightower said. “Queens will be just the beginning for him.”

Gantt texted Steedley shortly after he was hired and asked if there was anything he could do to help.

“How about not playing well next spring,” Steedley responded playfully.

But then he got serious.

“I love and respect Coach Gantt,” Steedley said. “Coaching against him next season, being in a dugout across from him, that’s going to be an unbelievable moment for me.”

Steedley’s first college coaching stint out after college was as a Pfeiffer assistant. For one year, while he was involved with getting a batting-cage business (Waxhaw Athletic Barn) started, he served as the jayvee coach at Waxhaw’s Marvin Ridge High.

In the summer of 2014, he nearly became one of Gantt’s assistants at Catawba.

“I’m close with (longtime Catawba assistant) Michael Lowman and he reached out to me and let me know Catawba was hiring and that led to me getting a job offer,” Steedley said. “That same day I got an offer from Rusty Stroupe to join his staff at Gardner-Webb. I was struggling with my decision, but my dad told me, ‘What are you waiting for? Gardner-Webb is Division I. That’s your goal.’ That was one of the toughest things I’ve ever had to do, calling Coach Gantt and saying no to him.”

Things worked out for Steedley at Gardner-Webb. He spent four years there, working with catchers and hitters. He made a lot of contacts and developed a reputation as a personable recruiter.

He came home to Charlotte for a year as an assistant, then headed to Jacksonville for a new challenge, but his time in Florida turned out to be just one virus-shortened season.

“This unprecedented spring has reminded all of us how little control we have and how unpredictable life is,” Steedley said. “But all you can do is make the best of it.”

Queens AD Cherie Swarthout made the announcement on Thursday that Steedley would be returning to North Carolina as a head coach.

He’s been spending some time with his parents in Granite Quarry in recent days, but he’ll be moving soon from Jacksonville to Charlotte. He’s single, so he doesn’t have a family to uproot.

“I am humbled and incredibly honored to be named the head baseball coach at Queens,” Steedley said. “This is an opportunity I’ve dreamed of, envisioned, and prepared for my entire life. Charlotte is home. I love this city and this state. I’m so excited to come back home and be a part of building something special. This opportunity would not be possible without my family, all the players that I’ve been blessed to coach in my career, and so many others who have invested in me. It would also not be possible without my coaches. I wouldn’t be who I am and where I am without their impact in my life.”

Steedley, 31, has a rather amazing head of hair that seems to defy gravity. He said he got the good news from Queens just as he was finishing a workout. They requested a head shot as soon as possible for a press release.

“The only suit in the locker room was three sizes too big, but I put it on,” Steedley said. “The headshot they got of me was right out of the shower and post workout.”

He may need his keen sense of humor for at least the next year or two. Queens is new to SAC baseball and was 14-30 overall and 5-19 in the league in 2019. The Royals have some catching up to do with established programs such as Catawba, Newberry, Tusculum, Wingate and Lincoln Memorial. Queens was 4-19 this season when play was stopped.

Steedley has always won in baseball, all the way back to his East Little League days. He remembers that his middle school basketball teams at Erwin, coached by John Cherry, had a 31-game winning streak.

Now he’s been entrusted with bringing a winning baseball mentality to a school that has become a SAC power in a lot of other sports, including men’s basketball, men’s soccer, men’s golf, swimming, tennis, cross country and track and field.

“I’m not walking into this unaware of how good SAC baseball is,” Steedley said. “But we’ve got a great city, a great school and a great facility. We’ve got a great recruiting base. We have every opportunity to build a winning culture.”