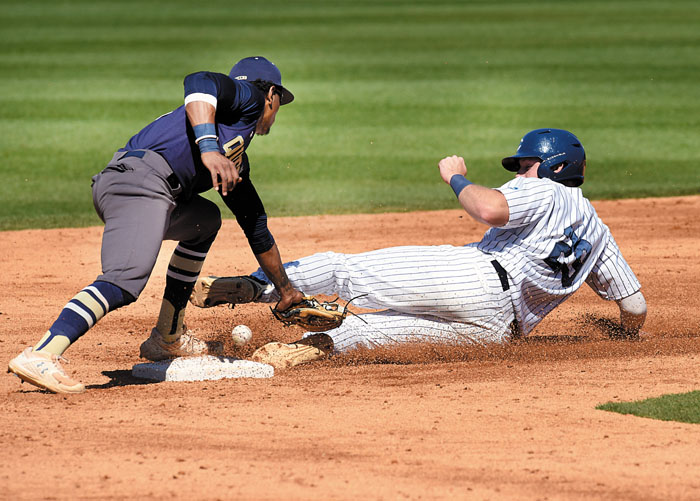 The Catawba baseball team matched its highest Division II ranking, climbing to No. 2 in the Collegiate Baseball Poll just as the season was ended. After losing its opening two games, Catawba won 19 of 20, including a stretch of 15 wins in a row. The Indians closed with a 19-3 record and an 8-1 mark in the South Atlantic Conference.

Catawba was anchored by a 10-member senior class.

DJ Laxton had two wins and a save over 14 appearances. He had posted 24 strikeouts over 21.2 innings. His 94 career appearances is third best in school history.

Caleb Link (West Rowan) had not allowed a run with two wins in three outings. He had fanned six in 4.2 innings and gave up just one hit.

Catcher Cameron Morrison was batting .436 on the year with five homers and 17 RBIs. In a season, he stands third best with a .537 on base percentage and fifth with a .836 slugging percentage.

Lee Poteat (West Rowan) was coming off NCBWA Southeast Region Player of the Week honors, batting .344 with a pair of homers and 16 RBIs.

Hunter Shepherd (Homeschool Stallions) was hitting .477 and had posted a 3-0 mark on the mound, fanning 28 in 27.1 innings. At the plate, he shared the team lead with nine home runs and had 26 RBIs. He is 12th all-time with 23 wins on the mound.

Sawyer Strickland (Homeschool Stallions) had posted a 2-0 mark on the mound with 22 strikeouts in 21 innings.

SOFTBALL
The Catawba softball team was 10-12 on the year. Tight games were common for the Indians with 10 games decided by a single run.

Kaylee Cook (A.L. Brown) had a double among her nine hits. She had driven in three runs, scoring six runs and stealing a pair of bases.

Preston Ellenberg went 3-2 in the circle with a 2.72 ERA. She posted 46 strikeouts over 46.1 innings. Her 189 career strikeouts placed ninth all-time.

Grace Holland had a double and scored a run in six games. She had .455 on-base percentage.

Taylor Martin (West Rowan) was hitting .317 on the year with three doubles and eight runs scored. She had swiped four bases.

Brooke Walser had a 3-4 mark in the circle with a save. She had struck out 44 batters in 63 innings. Walser ranks fifth with 269 career strikeouts, 10th with 23 career wins and tied for first all-time with five saves.

Anna Jasper was recovering from an injury and had not seen action.

WOMEN’S TENNIS
The Catawba women’s tennis team was 4-7 on the year, picking up wins against Limestone, Shaw, Belmont Abbey and Bluefield State. The team had two seniors.

Sophie Hirsch went 5-4 in singles and 3-6 in doubles. Hirsch won 47 career matches with a .712 win percentage to rank ninth all-time in both categories. Hirsch won 40 matches at No. 2, the most by any Catawba player at that flight.

Olivia Wooldridge was 5-6 in singles and 3-7 in doubles on the year. She stands 18th with 40 career wins.

MEN’S TENNIS
The Catawba men’s tennis team had a 1-8 record. The two conference losses came 4-3 at Lincoln Memorial and 5-2 at home to fourth-ranked Wingate.

Cason Hiers had collected a pair of wins at the No. 2 position and was 5-4 at No. 1 doubles. He teamed with fellow senior Ryen Reid for the doubles wins and the duo ranks 11th all-time with 19 wins as a doubles team.

Reid was 6-3 at No. 1 singles to go with his 5-4 mark with Hiers at No. 1 doubles where the duo posted 19 career wins to rank 11th all-time. Reid won 67 percent of his career singles matches to stand 13th overall in win percentage.

Adam Rocko had a pair of wins at No. 5 singles and won two doubles matches at No. 3.

The team had two seniors.

The Catawba women’s lacrosse team went 1-5 on the season and dropped its lone conference game 14-13 to Mars Hill.

Gianna Pezzulo had scored nine goals and handed out a team best 19 assists that included tying a school record with seven against Mars Hill. She set a school record with 111 career assists and 214 points and finished third with 103 goals. In 2020, Pezzulo added 11 ground balls, won seven draw controls and caused five turnovers.

Jillian Kurolvech tallied three goals on the year. She had one ground ball.

Brooke Applebaum had started in all six games. She scooped up 12 ground balls, won a draw control and had six caused turnovers.

Katie Barth was second on the team with 16 goals and had added three assists. She led the team with 14 draw control wins with 19 ground balls and five caused turnovers.

Michaela Gerard scored a goal in her five games. She added two ground balls and caused a turnover.

Larissa Brooks played in five games as a defender. She had four ground balls and caused three turnovers.

MEN’S LACROSSE
The Catawba men’s lacrosse went 3-3 during the 2020 season, winning its final three games, including a 13-4 win over Mars Hill in their lone SAC contest of the season.

The team had eight seniors.

Jared Richard had tallied three goals with an assist. He earned 10 ground balls with a caused turnover.

Mitchell Harris had seen action in four games. He had a ground ball and a caused turnover.

Reese Scott had picked up eight ground balls as a defender and caused five turnovers during six games.

Shane McCormick had scored a goal with an assist as a long-stick midfielder. He produced seven ground balls with a caused turnover.

WOMEN’S GOLF
The Catawba women’s golf team posted a school record 213.57 stroke average on the season. The team also set records for a single round (195) and a two-round tournament (604).

Kaley Barts had a win at the Rendleman Invitational in the fall, setting a school record with her five-under-par round of 67. She had a 76.64 stroke average over 14 rounds and her 78.05 career average is second best all-time.

Sarah Coltrane tied for first in her final tournament at the Battle at Hilton Head, losing in a playoff. She would have a 78.57 stroke average over 14 rounds.

Sandra Brink had one runner-up finish on the year. She had a 77.86 stroke average over 14 rounds with a best round of 73.

MEN’S GOLF
The Catawba men’s golf team set a school scoring record with a 297.89 stroke average over seven tournaments. In the final tournament of the year, the Catawba Indians lost in a playoff to Lenoir-Rhyne at the Rendleman Invitational.

Catawba had two seniors on this year’s team.

Jack Chatt had a 77.86 stroke average over seven rounds. He had a career-low round of 74 in his final round at the Rendleman.

Mack Sheppard had a 77.27 stroke average over his 15 rounds. He had a low round of 72 this year with a 68 in his career. Sheppard won the Anderson Invitational as a freshman.

The team had two seniors.

Gavin Rose participated in the long jump in his only indoor season.