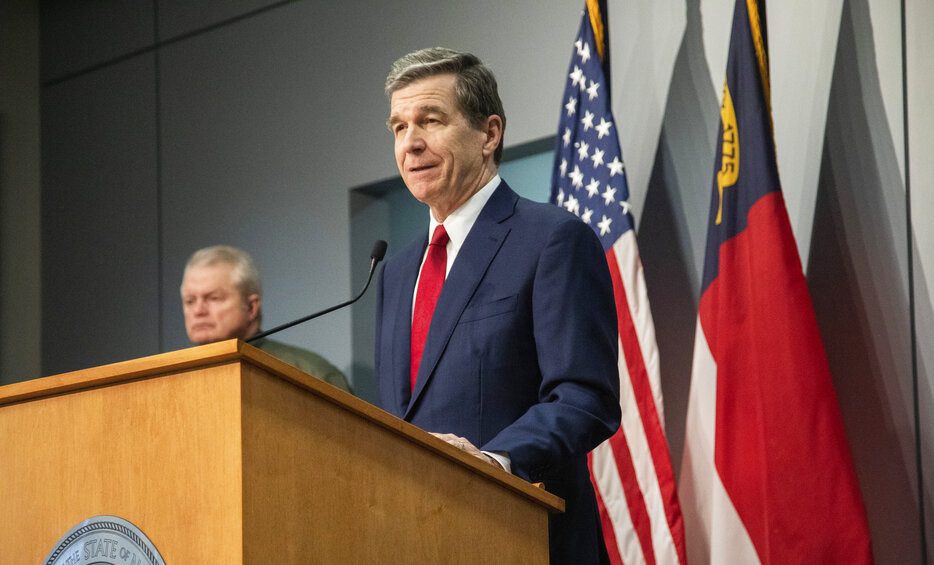 By JONATHAN DREW Associated Press
North Carolina Gov. Roy Cooper responded Friday to President Donald Trump’s plan to reopen the economy by stressing that the state needs the federal government’s help obtaining supplies to ramp up COVID-19 testing.
Commerce officials also said Friday that North Carolina was tripling the staff handling unemployment claims as the state faces a crush of hundreds of thousands requests. And an outbreak at a North Carolina prison grew to more than 250 inmates.
Trump told governors Thursday that restrictions could be eased to allow businesses to reopen in the coming weeks in areas that have extensive testing and a decline in cases.
At a news briefing Friday, Cooper, a Democrat, said states need the federal government’s help obtaining supplies to expand testing to levels needed to decide on easing business restrictions.
“I and other governors around the country have been clear. We still need assistance with testing supplies and personal protective equipment,” he told reporters. “The president has left the responsibility to me as governor to make decisions about how and when we ease restrictions. I accept that, but when governors are faced with global supply chain breakdowns when it comes to supplies and equipment, the federal government must help more.”
Cooper said Friday that more than 73,000 coronavirus tests have been performed by public and private labs around the state, but testing still needs to increase to allow him to evaluate when restrictions can be eased.
The governor’s stay-at-home order that limits nonessential businesses is in effect through April 29. Earlier in the week, he announced a framework for gradually reopening the state’s economy that will hinge on more widespread testing, extensive efforts to track down people in contact with the sick and slowed case and hospitalization rates.
On Friday, the state’s employment security division announced it will have increased its staffing to 1,600 by the end of next week to handle unemployment claims, more than triple its normal workforce. That includes temporary staff and private call center workers. The state has received a surge of more than 630,000 unemployment claims in the past month, most of them attributed to the economic slowdown spurred by efforts to slow the spread of COVID-19. Some out-of-work residents have complained of difficulty getting their claims processed.
“This will be the largest number of people working to provide unemployment benefits in North Carolina’s history,” Lockhart Taylor, assistant secretary of the Division of Employment Security, said in a statement.
State health officials reported more than 5,800 confirmed cases of COVID-19 on Friday, up by about 400 since the previous day. The state said about 150 people have died and more than 400 are currently hospitalized.
State and federal corrections officials are also fighting outbreaks at prisons in North Carolina. State prisons Commissioner Todd Ishee said during a media briefing that 259 inmates had tested positive as of Friday afternoon at Neuse Correctional Institution, a state prison in Goldsboro. He said none currently require hospitalization and that 98% of those testing positive were asymptomatic. All 700 inmates have been tested but some test results are pending. Those who test positive are being separated from inmates who don’t have the virus, and additional medical and security staff are being sent to assist at the facility. Ishee said no coronavirus-related deaths have been reported at any state prisons.
Meanwhile, the federal Board of Prisons reported that more than 50 inmates and 25 staff have tested positive for the virus at the medium-security federal correctional institution in Butner, making it among the largest outbreaks in the federal system. Another 14 inmates have tested positive at the nearby low-security prison in Butner, and the two facilities have a combined four deaths.
For most people, the coronavirus causes mild or moderate symptoms, and the vast majority survive. But for others, especially older adults and people with existing health problems, it can cause pneumonia or death.
___
Follow Drew on Twitter at www.twitter.com/JonathanLDrew.
___
Follow AP coverage of the pandemic at https://apnews.com/VirusOutbreak and https://apnews.com/UnderstandingtheOutbreak.